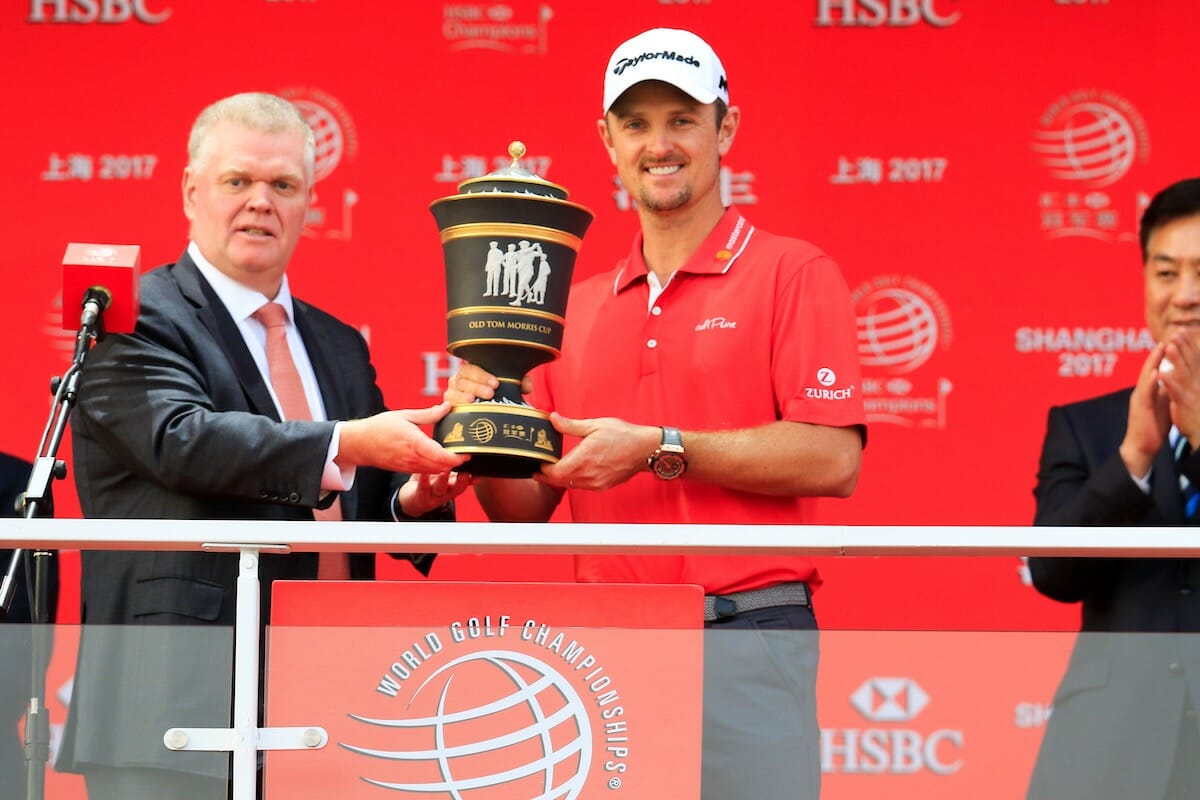 Justin Rose produced the biggest comeback of the season to win his tenth European Tour title as Dustin Johnson endured a day to forget at the WGC-HSBC Champions.

While it was a day to remember for Rose, Ireland’s Paul Dunne had a difficult time as he carded a final round 79 which saw him tumble 26 places on the leaderboard and into a tie for 38th.  Given that this was he first WGC event, a T38 position is certainly nothing to be sniffed at though and there are huge positives to be taken from his performances of late.

Dunne’s final round included six bogeys and a double which piled some rare misery on the shoulders of the young Greystones professional, who has been in the form of his life recently, but he picks up a cheque in the region of €54,390 which is a nice consolation. He may be left to wonder what might have been on a day when anything that could go wrong, did, but he wasn’t alone in playing the high numbers game as Dustin Johnson had his biggest fall since stairs-gate pre Masters 2017 in a calamitous final effort.

Rose was eight shots behind Johnson – who was six clear at the top of the leaderboard – when he teed off and remained six behind at the turn after playing his first nine holes at Sheshan International Golf Club in level par.

Rose then produced five birdies in a stunning back nine of 31 to get to 14 under after a 67, with Johnson limping to a closing 77.

The World Number One finished in a tie for second at 12 under alongside Swede Henrik Stenson and reigning US Open champion Brooks Koepka.

The victory is Rose’s second World Golf Championships title after the 2012 WGC-Cadillac Championship which started his run of six consecutive seasons with a European Tour victory – the longest active streak on Tour – and moves him up to third in the Race to Dubai Rankings presented by Rolex.

“This is really, really satisfying,” he said. “All players pride themselves on winning and I’ve won every year since 2010 (worldwide). I was very aware that that was slipping away from me this year.”

“To win a WGC is just amazing, they count for so much on both tours. It’s an incredible start to my 2018 PGA Tour campaign and gives me a real shot in the Race to Dubai as well.”

Any thoughts of a procession for Johnson were quickly forgotten as the World Number One got in bunker trouble to drop a shot on the first and then lost his ball off the second tee for a bogey-bogey start.

Rose took advantage of the par five second and when he holed a lengthy double-breaker over the ridge on the third, he was alongside Koepka four shots back.

Koepka three-putted the third and also bogeyed the fourth after finding sand, with Rose dropping  a shot on the sixth thanks to bunker trouble of his own.

Stenson had started the day with five pars but a brilliant tee-shot into the sixth moved him to 11 under and he was soon joined by Rose who got up and down from a bunker on the short seventh.

Stenson did not attempt to drive the par four and set himself up for a smart approach that cut the lead to three shots.

Koepka left himself a flick in to the same hole to get back to ten under but Rose three-putted the eighth and then found the hazard on the ninth to drop back.

He bounced back with a birdie on the 11th but the momentum was now with Koepka, who holed a lengthy putt on the tenth and a six-footer on the 11th.

Stenson dropped a shot on the same hole after getting a plugged lie but a brilliant tee-shot on the 12th saw him recover it with Johnson making a third bogey of the day.

All eyes were on the final group but ahead of them Rose birdied the 13th and then took advantage of the par five 14th to move within striking distance.

Koepka also capitalised on the 14th to cut the lead to one but the drama was to come on the next as both Koepka and Johnson got plugged in bunkers. Both men failed to get up and down but Koepka made a double-bogey after three-putting from the fringe and all of a sudden the event was wide open.

Ahead on the 16th, Rose played a stunning bunker shot to share the lead and he briefly held it on his own after Johnson hit a poor tee-shot and found sand with his second for another bogey on the same hole.

Stenson joined Rose on 13 under after driving to just short of the green and getting down in two but Rose put his tee-shot on the 17th to three feet and led on his own.

Stenson bogeyed the penultimate hole and Koepka was the only one of the leading contenders to birdie the last for a 71, with Stenson recording a 70 and finishing second at this event for the second consecutive season.

“I needed to regroup going into the back nine,” added Rose. “I kind of told myself I was four down playing the golf course. I played match play against the golf course coming in.”

“I didn’t know if 13 [under] was going to be good enough, I kind of figured I was playing for second and I thought 13 was going to be an important number to get to for that.”

“I saw DJ get back to about 14 or 15 and the game was on so it was certainly exciting coming down the stretch.”

Spaniard Rafa Cabrera Bello and Americans Peter Uihlein and Kyle Stanley finished at eight under, a shot clear of Brian Harman and two ahead of England’s Matthew Fitzpatrick and Austrian Bernd Wiesberger.