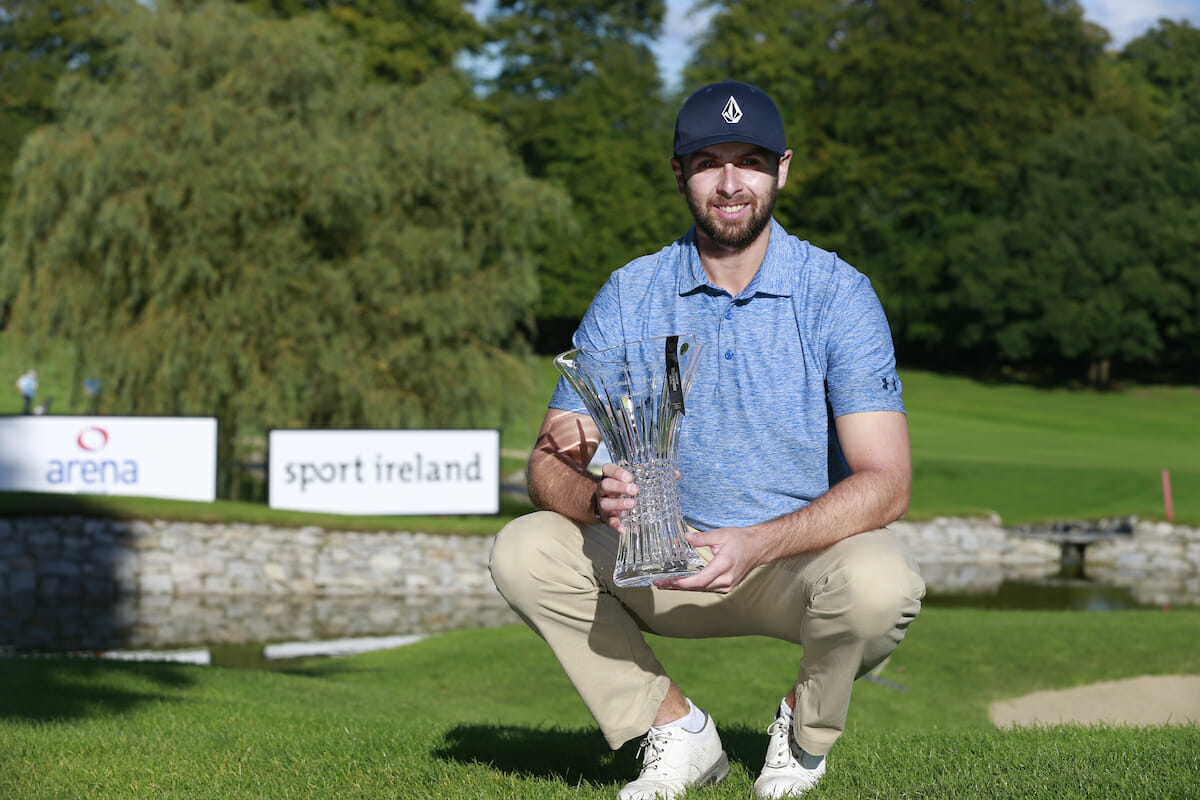 A third successive round of 69 fired Ruaidhri McGee to the Christy O’Connor Jnr Memorial Trophy as leading Irishman at the Irish Challenge at Mount Wolseley Spa, Hotel and Golf Resort.

The Derry man moved to six under par and into a share of 15th place, five shots ahead of closest challenger, Chris Selfridge. It was the second time the prize has been awarded following last year’s sad passing of the popular Irish golfing icon who designed the course at Mount Wolseley.
“It’s great to win this,” said the proud 26 year old. “It’s my home tournament so I’m delighted to come out as the top Irishman. It’s a lovely trophy and it’s great to become the second winner of it.
“It helped motivate me today, I was thinking about it out there so it kept me going and trying to make the birdies coming in to see if I could clinch it, so it’s great to have done so.
“Christy Jnr was a great inspiration for me growing up as a young Irish golfer, so I’m really honoured to win this trophy – he did a good job with his course design here as well, so thank you Christy for that!”

Nearest rival, Chris Selfridge finished his tournament in fine style with a two under par round of 70, good enough for a level par total and a tie for 33rd. Cormac Sharvin was one shot further back after a disappointing final effort of 74.
The day belonged to Frenchman, Julien Guerrier, however, who clinched a second European Challenge Tour win of the season with a dominant six-shot victory, hours after compatriot Romain Wattel triumphed at the KLM Open.
Wattel has significant Challenge Tour history of his own, having won on the tour in 2010 when still an amateur, and he is sure to be joined on the European Tour next year by Guerrier, who remains second on the Road to Oman but has cut Aaron Rai’s lead to around 19,000 points.
Guerrier had previously won on home soil at June’s Hauts de France Golf Open but rarely has he been more impressive than in Carlow, where his bogey-free five under par final round of 67 extended his run to 48 holes without dropping a shot.

He also credited becoming a father for the first time earlier in the year with his recent run of good form, which he will hope continues at the lucrative Kazakhstan Open next week.
“I just heard about Romain’s win,” said the 32 year old. “It’s so great because he’s had a difficult year so I am very happy for him, and for my friend Joël Stalter who tied for third – it’s a great day for French golf with me winning as well.
“It was a very good round, very steady. I’m really surprised by how well I managed to play such steady golf – it’s my goal but then to do it this week so well is very pleasing.
“The goal was to make birdies and not to make bogeys. I had a steady start and with Oscar unfortunately dropping shots I built a good gap, and then I made a few more birdies, a second bogey-free round in a row, so it’s very good.
“It’s the most consistent and steady I have ever played and it was great to finish in style with a birdie in front of the great Irish crowds – I’m very proud to win here and in this way.

“The Rankings wasn’t in my mind today but I know I have now closed the gap, but there are a lot of big tournaments ahead so it will be interesting – the goal is to win but with golf you just never know so I’m just going to keep my feet on the ground and enjoy this win.
“Being a father has helped my game a lot. You know when you make a bogey, it’s not the end of the world, and I try to think of my son and realise this is a happy place.
“We have a pretty good desk! We have a chance to do this job and we are very lucky to do so, and being a father makes me realise that even more – maybe I now practise a bit less, but when you go to practise you know why you’re doing it!”
Playing with Guerrier, Oscar Lengden bounced back from a disappointing start to take a share of second place on 11 under par, with Jarand Ekeland Arnoy securing his career-best result alongside Steven Brown, who sealed his fifth top five finish of the season.