Long Friday in store at the KLM Open, weather permitting 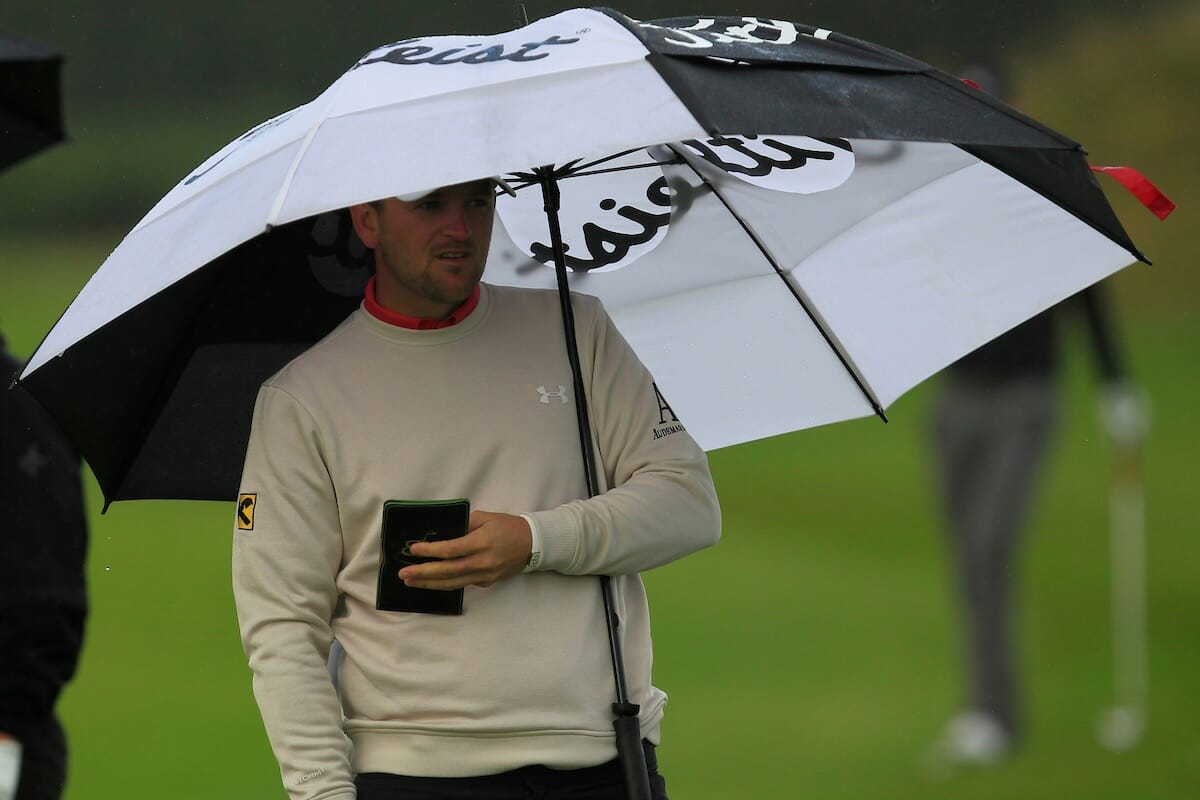 Bernd Wiesberger and Richard Finch share the clubhouse lead on day one of the KLM Open after both men defied some treacherous conditions to produce a pair of five under par 66s over The Dutch to establish a one stroke lead.

Gusting winds and driving rain battered the morning field and, just moments after Finch signed his scorecard, play was suspended due to those adverse conditions. As the rain continued to fall, tournament organisers were left with no choice but to suspend play for the day, with half of the field set to return on Friday morning to complete their first rounds.

Of those whose rounds were cut short, Padraig Harrington and Paul Dunne have a long Friday ahead of them. Harrington managed to negotiate five holes to stay at level par. The Dubliner bounced back from a bogey five at the 3rd for a typical Harrington esque two at the par3 4th before being called in a hole later. Dunne saw even less of the course, bogeying the first to sit at plus one after three.

Before all that, however, the story of the day was the perfect pair at the top who came through the horrendous weather beaming from ear to ear. Wiesberger carded seven birdies and two bogeys, while Finch shot his lowest European Tour round for two years.

Starting on the back nine, Wiesberger birdied the tenth and 11th and picked up another two strokes on the 14th and 18th – both par fives – as the 31 year old Austrian turned in a four under par 32.

The four-time European Tour winner made a ten-footer at the second and, after a dropped shot on the fifth, a five-footer at the sixth before holing from eight feet at the seventh. Wiesberger had a second bogey of the day on the ninth, his last, after leaking his wedge approach right and failing to get up and down, but despite the hiccup, it was still an excellent day’s work.

“The conditions were really tough out there and although I gave away a couple of easy shots I am really happy with the score and the way I played today,” he reflected. I putted nicely today and controlled the ball flight well. I think I only missed three or four greens which was pretty good in these conditions.

“So overall I am happy with the start. I have been playing well recently but maybe not getting the results I feel I should have been getting so hopefully I can change that soon.

“Playing with Joost was great today because we had the crowd with us and it’s always good to play in front of a big crowd. Joost didn’t play his best today but I can totally understand the extra pressure he is under.

“We are both the only guys from our countries on the European Tour and when you play in your home event there is a lot of pressure and expectation on you and you have to find a way to deal with it. But I am sure Joost will be back tomorrow and get a score going to be here for the weekend.”

Finch won twice in 2008, but lost his card in 2015 and suffered from an injury-ravaged couple of years since then. He has been making his way back to the top of the game, however, and after making his first cut for 20 months in Denmark last month, is hopeful of continuing his positive trajectory of form.

Finch carded six birdies, including four in a row from the 13th, against a solitary bogey on the 11th during round one, and sat in the clubhouse another very satisfied man:

““It was important to get off to a good start today because when you are playing on conditions like this you know it’s going to be a battle so to start with two birdies was huge – it felt like I had a bit of credit in the bank. I managed to hang in and finish well so I am delighted”, said Finch.
“My game has been ok the last few weeks. It’s the usual story of not getting the scores I deserve and then sometimes throwing a terrible round in there. But it has been improving lately and today it just all came together a lot better.

“It’s been a while since I have been at the top of a leaderboard to be honest. Obviously I missed last year through injury and haven’t really got it going since I came back but today was very encouraging and I hope to be able to keep that going for the next few days.”

At five under, Wiesberger and Finch lead by one from Sweden’s Joakim Lagergren and China’s Ashun Wu, with Lagergren’s compatriots Johan Edfors and Pontus Widegren alongside England’s Matt Wallace, France’s Matthieu Pavon and home favourite Maarten Lafeber on three under.