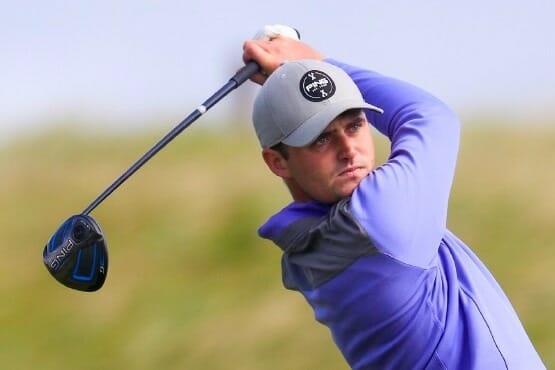 Conor O’Rourke enjoyed his first round as a professional golfer as he shot a two over par 74 on the first morning of the Irish Challenge hosted by Mount Wolseley Hotel, Spa & Golf Resort.

The Naas player joined the paid ranks this week and performed creditably in tough scoring conditions, combining three birdies with five bogeys as he finished his opening round five shots behind early leader Jacopo Vecchi Fossa, with only six of the morning starters shooting under par.
The 26 year old played in this event – part of the European Challenge Tour’s Road to Oman – last year, signing for an incorrect score in his second round, and he has given himself a great chance of picking up his first pay cheque if he can repeat this form in Carlow tomorrow.
“It was difficult today,” he said. “I enjoyed it but it was tough conditions, pretty blustery, similar to last year actually when I played as an amateur, but it was a bit of a struggle, not easy, but I enjoyed it.
“It’s very nice to be able to stay at home as well, any time you can sleep in your own bed is a bonus as it doesn’t happen very often, so I’m enjoying the week.
“I’m just trying to do my best, go about my business and see how it goes tomorrow. All I can do is give it my best and see where that leaves me going into the weekend.
“I think the scores show it’s been pretty tough today. There are a lot of long holes, a lot of long shots into tough, sloping greens, so there aren’t a lot of chances out there apart from the par fives.
“I’m content enough to get in there with two over, I made a nice birdie on the last too, and with the scoring not being brilliant it puts me in a good position.
“I’m only about 40 minutes away from the course so I’ve played it a bit and know it quite well by now but I think it’s like anywhere, your long game has to be pretty on otherwise you’re going to be struggling.
“It would be nice to pick up my first cheque this weekend but we’ll have to see, there’s a lot of golf to go and a lot of work to do, but I’ll do my best tomorrow and see what I can do.”

O’ Rourke is scheduled to tee off his second round at 14:30 tomorrow in the last group off the 10th tee as he chases making his first professional cut.