Darren Clarke was full of praise for the ‘Tiger Woods’ of India after ending a miserable 13-month run of outs as he made the cut in the MENA Tour’s Dubai Creek Open.

Clarke added a two-under par 69 to his opening 68 to be in a share of sixth place at the Dubai Creek Golf and Yacht Club course in the UAE.

It is the first time since the 2016 Open Championship, where Clarke shared 30th place, that the Ulsterman will get to play a full tournament though in this case all three days in Dubai.

Thomas (17) matched a world record in posting nine birdies in succession en route to a course-record equalling 10-under par 61 with the Dubai-based golfer muscling his way to second place at 11-under par just two adrift of Keysner. 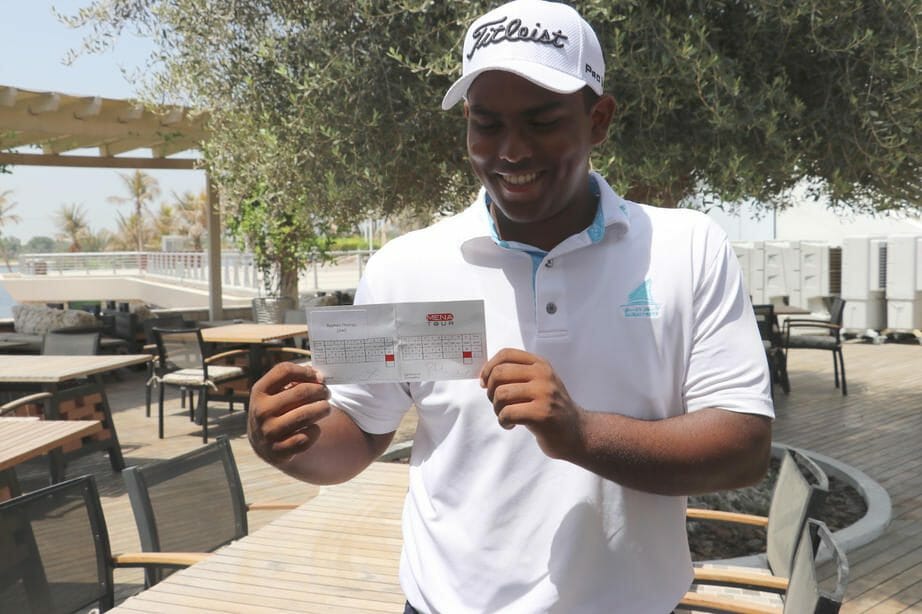 Former Open Champion, Mark Calcavecchia holds the record for the most number of birdies in succession on the PGA Tour during his second round 65 at the 2009 RBC Canadian Open.

The European Tour wrongly credits Austrian giant Bernd Weisberger with a record of nine straight birdies set earlier this year the Maybank Championship in Malaysia. But that could hardly count given a ‘preferred rule’ was in effect and with eight players, including the late, great Seve Ballesteros and Clarke, managing eight birdies in succession.

Clarke achieved the feat in posting a 60 on day two at the 1999 European Open at the K Club with his prized Ferrari bearing the license plate – DC60 – while his twitter account is @DarrenClarke60.

And Clarke, who was drawn to play alongside Thomas for the first two rounds, was full of praise for the defending champion.

“Rayhan is a huge talent, obviously. He played beautifully, hit the ball very close and putted nicely,” said Clarke. “The way he was playing, this is the worst he could have shot.  He was very calm and composed and read the greens very well, which I couldn’t!”

“Rayhan’s game is trending in the right direction and I think he has a great future of ahead of him. I wish him the very best.”

Thomas attributed his brilliant effort to what he called smart golf. “I don’t think it was my best round ever, probably one of the best. I just wanted to avoid silly mistakes and make as many birdies as I could.”