Brendan McGovern took a huge step towards retaining his playing rights on next year’s Senior European Tour as he claimed his best finish with a share of second place at the Travis Perkins Masters on the Dukes course at Woburn.

The Headfort man started the day three shots behind overnight leader Clark Dennis and quickly fell back to six back after the American’s blistering start as he fired four birdies in his first five holes. At that point it looked all but over but Dennis dropped a shot on eight and doubled the ninth leaving McGovern and Englishman Philip Golding three back at the turn.

Although never taking the outright lead McGovern kept pressure on the leader. The Kells man dropped a shot on ten that he quickly made back on thirteen to sit just one shot back with three holes to play as Dennis suffered a total collapse carding two further double bogeys on his back nine leaving Philip Golding in the driving seat posting a five under total.

With Golding in the clubhouse McGovern showed his class as he bounced back from a drop shot on 17 with a superb birdie on the last that proved to be extremely lucrative moving him back up to a tie for second place with Clark Dennis on four under.

McGovern claimed a cheque for €33,300 for his best finish on the Senior circuit taking his yearly earnings to €63,228 jumping the Headfort man up to 18th in the order of merit with only four events plus the end of season MCB Tour Championship left to play this season.

The victory was Golding’s second title of the 2017 as the Englishman won the Swiss Seniors Open at Golf Club Bad Ragaz in July.

“I am a little bit in shock,” said Golding. “I kept looking at the leaderboard; I’ve been around long enough to know to keep plugging away and grind it out. I said to my caddie that I was playing for second spot after seeing Clark was five or six ahead of me after five holes; but Paul said to me to keep going. 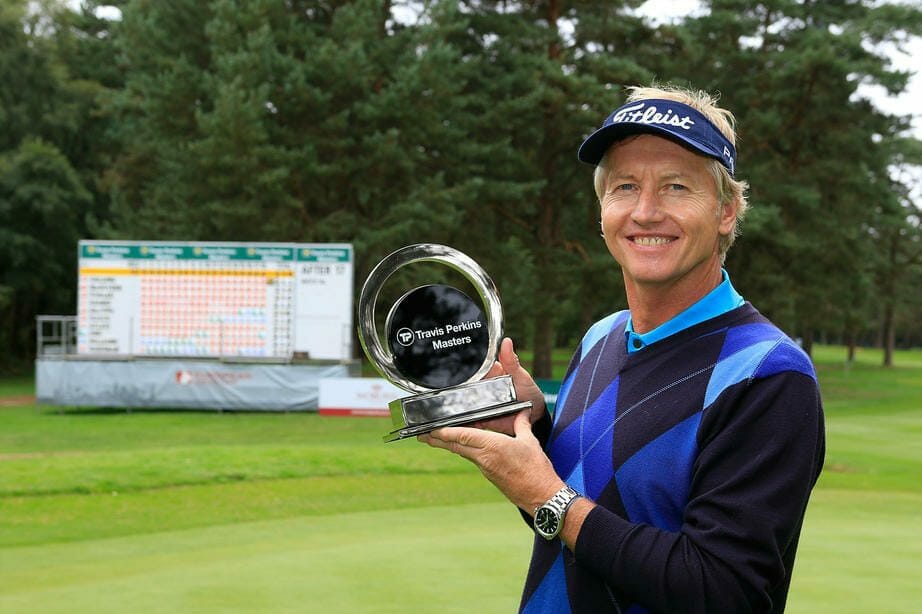 Above – Philip Golding with the trophy – Photo from Getty Images

“I’m delighted. It was tough out there. It’s a great course, Woburn. If you hit it in the trees you have to take your medicine, come out sideways and then carry on. I finished runner-up last year, we know it’s a tough course. It was blustery out there today. If you’re in the trees, downwind, you’ve no idea what will happen.

“You never want to see what happened to Clark, but he’s a good player. He has been up there three or four times, and I’m sure he’ll cross the line soon.”
With this victory, Golding moves up to fourth on the Senior Tour Order of Merit and with the Paris Legends Championship at Le Golf National, site of his 2003 HNA Open de France victory, on the horizon. The Englishman is looking to finish the season strong.

“We go to Italy next week, which is a great course,” he said. “There are just a couple of weeks to go until we’re back in Paris, which I can’t wait for.”
Chris Williams, who leads the Order of Merit, finished fourth with a score of two under par, one stroke ahead of 2016 Rookie of the Year Magnus P Atlevi and 2011 Rankings winner Peter Fowler.