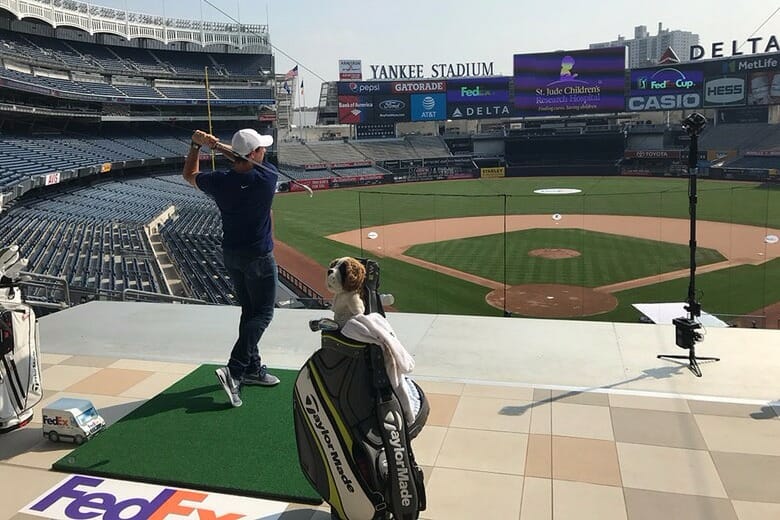 Rory McIlroy warmed-up for this week’s opening event of the lucrative FedEx Cup Series hitting a home run with a golf ball at famed Yankee Stadium.

There was no sell-out New York crowd in attendance given the Yankees were competing in Detroit and other than a few PGA Tour officials and FedEx Cup sponsor VIPs.
McIlroy first hit wedge shots from a corporate enclosure into the diamond area as part of a ceremony involving FedEx making a $US 1 million donation to St. Jude’s in McIlroy’s name, the four-time major champ took on cancer survivor Mary Browder Howell in a friendly competition involving targets set up around the diamond and in the outfield grass.
“It’s inspiring to see someone come through a battle like that and be as achieved and successful as she has been since, it’s incredible,” said McIlroy.

“She’s come through a battle 100 times harder than anything I’ve had to do in my life.”
But then when the official dignitaries had left McIlroy pulled a 6-iron out of his bag to hit a shot out of the ball park.
McIlroy last competed a fortnight ago at the PGA Championship and leaving North Carolina for Belfast expressing uncertainty, and due to his on-going rib injury concern, that he may not play again for two weeks, two months for the start of the New Year.

However, the PGA Tour released the draw also yesterday (TUES) for the opening two rounds of the Thursday starting Northern Trust on New York’s Long Island and McIlroy will tee-up in the fourth group of the day at 12.53pm Irish time.
“It’s a funny one as I played two weeks in a row and I hit balls everyday so it was a heavy schedule, so I’ve really tried to rest and it’s felt better and manageable,” he said.

“I want to get a win before I shut it down for the season, so I’m excited for the next few weeks, but I’m excited for the next three months after that. Because more than likely I’ll take some time off and regroup. When’s the last time I’ve been able to take that much time off and focus on myself and my game. We don’t get an off-season anymore, so to be able to get that time to afford myself, I’m really excited about that as well.”

In fact, McIlroy will tee-up on the Glen Oaks course in Old Westbury, and the first the course has held any event of stature, not having won this year and heading into the four-event Play-Offs as defending Tour Championship winner.

And McIlroy will have Harry Diamond still on the bag after his ‘Best Man’ carried the clubs both in Ohio and the PGA Championship.
“Harry will be on the bag through the Play-Offs and then I have a good few months to meet some guys,” he said.
“I’m at the point where I want to spend a couple days with a few people first to see how the chemistry is. People’s minds work differently on the golf course and that needs to match up properly. I don’t want to go through trying out caddies week to week, that doesn’t work for me.”