Harrington and Dunne excel as Rory struggles in Dundonald

The stroke average for the field for the opening day of the Aberdeen Asset Management Scottish Open may have been slightly over par at 72.54 but that didn’t stop Paul Dunne and Padraig Harrington post steady opening rounds at Dundonald Links.

Harrington carded seven birdies in his opening 67 to sit in a tie for second on -5 while Dunne who is chasing one of the last three places available for next week’s Open Championship was one shot further back after a 68.

Harrington’s score was made on the front nine as the Stackstown professional was out in 32 with no blemishes on his card. The back nine was a much tougher affair and the two time Open champion showed his class around the greens to grind out a score.

“I played okay through the first 12 holes, or certainly early on, and made the most of it.” Said Harrington. “You know, whatever opportunity came my way, I kind of took it early on and I holed a good putt on the first, which, in these conditions, you’re always happy if you can get under par early on. I moved forward from that. Then I struggled a lot over the last couple of holes in the rain. I kind of panicked coming home but my short game saved me the last couple holes and I have to say the four on 16 was a minor miracle.”

“It looked like I was going to take triple-bogey on 16. We were really struggling to find the ball, and my provisional was stuck in the bunker. So I would have been hitting my fifth shot from a long way out, and seven would have been a good return. All of a sudden, I turned it into a four. When things are going your way, they go your way. Thankfully I was doing well enough that it counted. Making a four instead of a seven kind of makes my day.”

Dunne brilliantly recorded 12 one-putts in a tally of just 24 putts for his 68.
Like McIlroy, Dunne also found his way last Monday across the Irish Sea by ferry and for a first return to Dundonald since 2008 when he represented Ireland in the Duke of York Young Champions Trophy.
“I was aged 15 when I first came to this part of Scotland and it was on Dundonald, and I qualified having won the Irish Boys joining national winners from around the world”, he said.

“I cannot remember much about the back then other than Stiggy Hodgson won by 11 shots but in coming back I do remember the golf course and that has, in a small way, helped this week”.
Dunne kick started his round with back-to-back birdies and holing putts of 20-feet and 15-feet, and indeed one-putting the first three holes after parring the third.

“Fortunately, the first two holes were straight downwind and if you took driver, as I did, you could kill the holes with a wedge into both”, he said.
“So, it was nice to start birdie, birdie because when I turned back into the wind it did make it feel a bit easier.
“The biggest challenge though is around the greens as they a little funky with a lot of little slopes with some subtle run-offs, and with some double-breakers.”

“So, this golf course is not as demanding off the tee like a lot of true links courses and it is around the greens where you have to have your wits about you.”
There are only three places left for Dunne to qualify next weeks Open Championship and he knows all too well not to let that distract him.
“I knew last week at the Irish there was only three spots and it is the same this week, so all I can do is my best and finish as high as I can to give myself a chance to get in”, he said.

“But then I have been asked a lot about qualifying for The Open and really, I am going to have to win the tournament to be really guaranteed one of the spots. If not, I will just take next week off”. 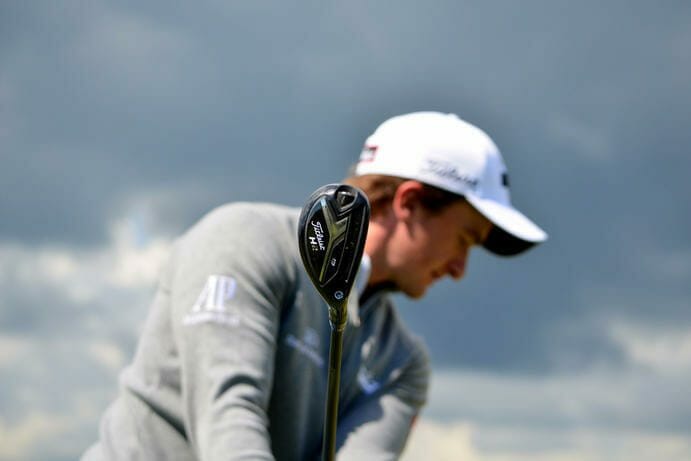 However, Dunne’s most immediate wish was a long lie-in ahead of his second round.
“Because of a pro-am both Tuesday and Wednesday afternoon this week those of us not in the pro-ams have had to go out early, so I have not been able to sleep pass 6am like in about six days now”, he said.
“So, really looking forward to long rest tonight before I am out just before 2pm”.

And Graeme McDowell, and similar to McIlroy, seemed no closer to turning around his poor run of form in signing for a three-over 75.
McDowell was three-over through six holes and while he got one back on his 11th hole he then doubled his 13th before birdies at 14 and 15 but a bogey at his 16th.
It has the now World No. 102 trailing well down in a share of 12oth place.
Sadly, Darren Clarke finds himself again in last spot after a round of 80 and two days after his pro am team finish bottom.

At the top 2014 Irish Open Champion Mikko Ilonen rediscovered his form in stunning fashion to fire an opening 65 and take a two-shot lead. The Finn arrived at Dundonald Links for the fourth Rolex Series event of 2017 on the back of four missed cuts and with just four sub-70 rounds all season.

“A 65 is the round of the season for me, really. It’s nice to get something going, make a few birdies and no mistakes on the card.” Said Ilonen
“I actually changed my irons on Tuesday to Titleist 718s. It can be just little things like which that give you a little extra confidence. I didn’t really miss one shot – well, one tee shot I missed on the eighth – but other than that, I struck the ball better than I have in probably the last two or three years.”

“Well, it’s a long way to go, it’s Thursday, isn’t it? You’ve got to take advantage of what you get. When you have those chances, you’ve got to make some birdies. I missed a couple of short-ish birdie chances in the beginning, and luckily I didn’t get frustrated there because there were plenty more holes to come. So, it was just a matter of staying patient.”

“Last week was fantastic and The Open coming up next week, I’m not in for that yet, but it’s always been one of my favourite tournaments. I just think the Irish Open, the Scottish Open, should definitely be on links courses, every year.”

World Number ten and 2015 Scottish Open champion Rickie Fowler of the USA is in a group of six players at five under alongside fellow countryman Paul Peterson, Padraig Harrington, the English duo of Ian Poulter and Callum Shinkwin, and Australian Andrew Dodt.
The Scottish pair of Stephen Gallacher and Richie Ramsay, Swede Magnus A Carlsson, Paul Dunne, Frenchman Benjamin Hebert and America’s Matt Kuchar are all one further back at four under with former Masters champion and World Number One Adam Scott among the ten-strong chasing pack on three under.