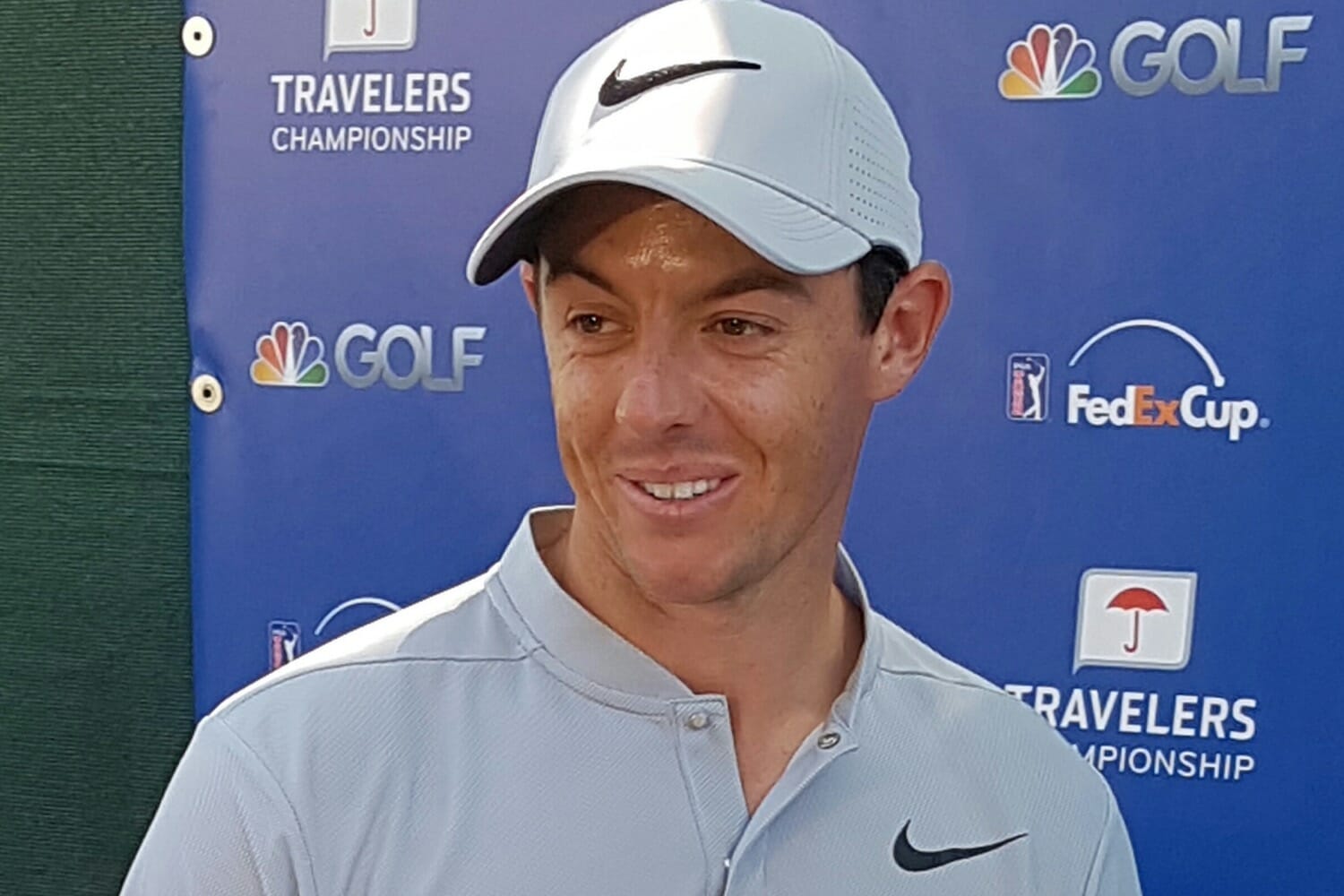 Rory McIlroy joked he may turn to using his father’s putter after the frustration of 30 putts in a score of 67 on day one of the Travelers Championship in Cromwell, Connecticut.

The World No. 3, contesting the $US 6.8m event for the first time, grabbed four birdies along with a bogey in the company of USA Ryder Cup Captain, Jim Furyk who had just 24 putts a year ago to shoot the Tour’s first score of 58, with Furyk backing up that effort with a similar three under score as McIlroy’s.

In fact, McIlroy found himself upstaged by fellow Irishman Padraig Harrington who returned to competition following a freak left elbow injury last fortnight to snatch seven birdies in a four-under 66 in ideal scoring conditions on the TPC River Highlands course.

Harrington was in jovial mood but in contrast, McIlroy had nothing much to laugh about having burned the hole a number of times in his round leading to his downbeat mood before it all changed as he met wife, Erica, who was waiting for her husband before the pair headed into the Player’s Lounge for lunch.

“I have come off the golf course a little disappointed because I gave myself so many chances but it should have been three of four better as there was a good few putts that hit the hole but didn’t go in,” said McIlroy.

“If a few of those go in, it’s a different story, and all of a sudden you’re shooting something in the low 60s and you’re feeling really good about yourself. So, it is just about staying patient as I know the game is there with my tee to green game very good.”

“I could have made a lot more birdies than I did but a 67 is still a decent start and it is nice to see a few red numbers there on the card. Also, I just feel much better about my game out there than I did at Erin Hills and I do feel a lot more comfortable in these surrounds as it is tree lined and there is course definition, so you can visualise your shots better”.

But after missing the cut in last week’s U.S. Open McIlroy was on the phone last Monday to UK-based putting coach, Phil Kenyon and is still striving to find the touch on the greens that has earned him four Majors.

“We have been working on green reading a little bit as my green reading was off as Erin Hills as the surfaces last week were perfect, so you had no excuse,” said McIlroy.

“So, I have been working on that a little bit. But my right forearm gets a little high at address. So just trying to keep that sort of nice and tucked in.”

“So, trying to keep my right hand a little stronger on the club and sort of have my palms facing each other a little bit. And just trying to be really strict with my posture and getting into good position before I stroke it.”

McIlroy indicated he has just the one putter with him this week but joked he could be tempted to try a putter TaylorMade left in McIlroy’s locker for use by his father, Gerry.

“I am taking the putter left for my dad back home with me but then I may just have a dabble with it”, he said smiling.