Hats off to Gavin Moynihan. After a tough rookie year as a professional he is certainly making up for lost time this season.

Already with his EuroPro Tour win at Close House the Island professional was depending on invites to get him limited starts on the Challenge Tour this season. All that uncertainty was put to bed today for the Mount Wolseley touring professional.

The two-time Walker Cup star was delighted with his week at La Cala Resort for the Match Play 9 event this week. Moynihan might have lost the final to England’s Aaron Rai 2&1 but the second place finish has changed the course of his season.
“I played really well this week and am very happy with the weeks work, even in the final I have no regrets.” Said Moynihan. “My ball striking was great again today and even In the final I was actually inside Aaron all day with my approaches but he just holed everything, he was like a machine on the greens, it was very impressive to watch. I was three under for the eight holes we played but he had seven one putts in the eight holes and that kind of putting gets the job done.”

Speaking from the airport Moynihan was making an unexpected trip to this week’s event in the Czech Republic and the Mount Wolseley touring professional has all but secured his Challenge Tour card picking up €22,000 and jumping from 81st to eighth in the Road to Oman rankings following his runner-up finish in Spain.
“To be honest, I would have bitten the arm off you for second spot coming here at the start of the week.” He said. “ That result means I pretty much have a full playing schedule now on the Challenge Tour for most of the season. I can play pretty much everything from mid-June on as there is a special category for players in the top 45 of the order of merit not already exempt, so I’m delighted with that.”
“I’m going to play this week in the Czech Republic and then Switzerland the following week although I might have to take a flying trip home in between the events, I only planned to be out here for this tournament so I only packed enough gear for this week! All I brought was a few tops trousers and only one pair of golf shoes so I may go home and stock up.”

“It’s been coming,” he added “The win a few weeks ago was great. But I knew I needed a good week on this tour to get more starts. That was the goal. I’m not one bit disappointed at all leaving here,  I didn’t drop one shot in my five match play matches and was -18 for them, I know I am playing well and hope to bring that form with me over the next few weeks”

The winner Aaron Rai secured his second European Challenge Tour victory of the season by beating Moynihan 2&1 in the final. The Englishman, who won the season-opening Barclays Kenya Open, showed skill and grit throughout the final day at La Cala Resort, coming through three nine-hole match play fixtures to claim his second title in four starts on the 2017 Road to Oman. 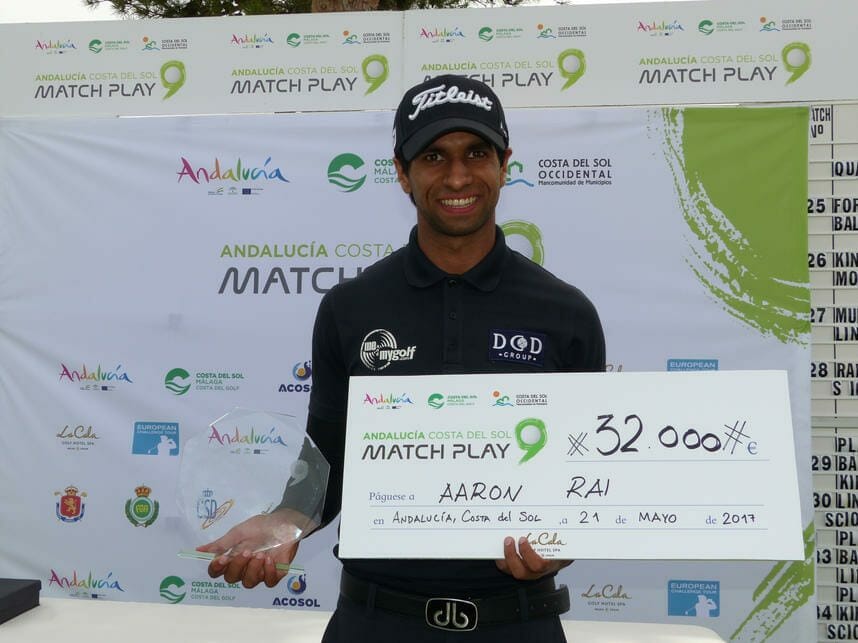 After a phenomenal start to his second season on Europe’s top developmental tour, Rai is well-placed to claim the three wins needed to guarantee automatic promotion to the European Tour – something he is well aware of.
“It is an incredible start and obviously puts you in a very good position for the rest of the season,” he said.
“I think to win full stop is also incredible, no matter when it is in the year. It is not too different from my first victory as a win is still a win and it doesn’t happen very often in a golfer’s career.

“I think the format this week was very good. It was short enough to make it interesting to watch, but long enough to give yourself a chance of recovering if you don’t get off to the best of starts – so it’s a very good mix.
“I obviously got off to a very good start in the final, but that was only two holes in and you have to stay focused as seven holes is still a long way to go in this format.
“Gavin came back at me, and even when I went 1up at the sixth I still felt as though there was a long way to go.
“It was a really close match, we birdied six of the eight holes between us, so I knew I couldn’t make any slip ups over the next few holes.

“When I saw Gavin’s putt just miss on the eighth I felt pretty confident. I knew it was for the match, but I just managed to keep my cool.”
Elsewhere in Andalucía Ford beat Murray 2&1 to take third place, Sciot-Siegrist beat Kinhult 3&2 to claim fifth place, while Matthew Baldwin swept aside Oliver Lindell 3&2 to finish in seventh place.
Rai’s victory on the Spanish coast takes him to top spot in the Road to Oman Rankings, with America’s Julian Suri sitting in second place.