Graeme McDowell was delighted to get to the air-conditioned comfort of the clubhouse after dealing with the meltdown conditions in posting a one under par 71 at his opening round of the Players.

McDowell grabbed four birdies and one less bogey to be trailing four strokes behind the leader American William McGirt at five under par.
GMac had been one over par early in his round in taking bogey at the 11th or his second hole but picked-up birdies at his fourth, where he holed a nine-footer, and then also at his eighth to turn at one-under par.
He then played the inward nine in level par with two birdies and two bogeys, and saving the best for last when McDowell landed a 70-yard wedge third shot to just four inches at the dog-leg par five ninth.

“A 71 is a good day’s work considering I didn’t play that fantastic”, he said.
“The breeze was starting to kick-up those last four holes, so looking at the general scoring I think anything under par this morning would seem to be okay.

“I probably should have done better but the pin positions out there today were fairly tough and they seem to be a yard or two closer to the edge of the greens that you are used to seeing them here at Sawgrass.
“I guess that is because the greens are now somewhat flatter and softer, and by that I mean in terms of the undulations, so they were a bit tougher to get at.
“So, like I say I didn’t play all that great but I wasn’t 100% at the races and sometimes you have to deal with that to see if you can put a score in because I would have taken one-under.”

It was a case of Rusty McIlroy as the Holywood man struggled off the tee on his return to action this week. With his new driver miss-behaving McIlroy only managed to hit 6 of 14 fairways on route to signing for a one-over par 73.

“Yeah, what can I say. I was a little rusty out there. I feel like I turned a 75 or a 76 into a 73, so it wasn’t all bad”, McIlroy said.
“But yeah, I didn’t hit enough fairways, didn’t hit enough greens. Felt like I was scrambling all day. But I scrambled pretty well, and I birdied two of the last three holes to make it somewhat respectable.”

Shane Lowry fired an opening round 74 leaving him in a tie for 83rd and with some work to do to make tonight’s cut. 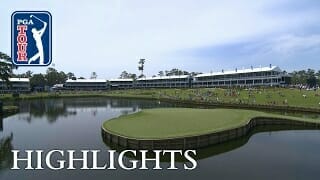