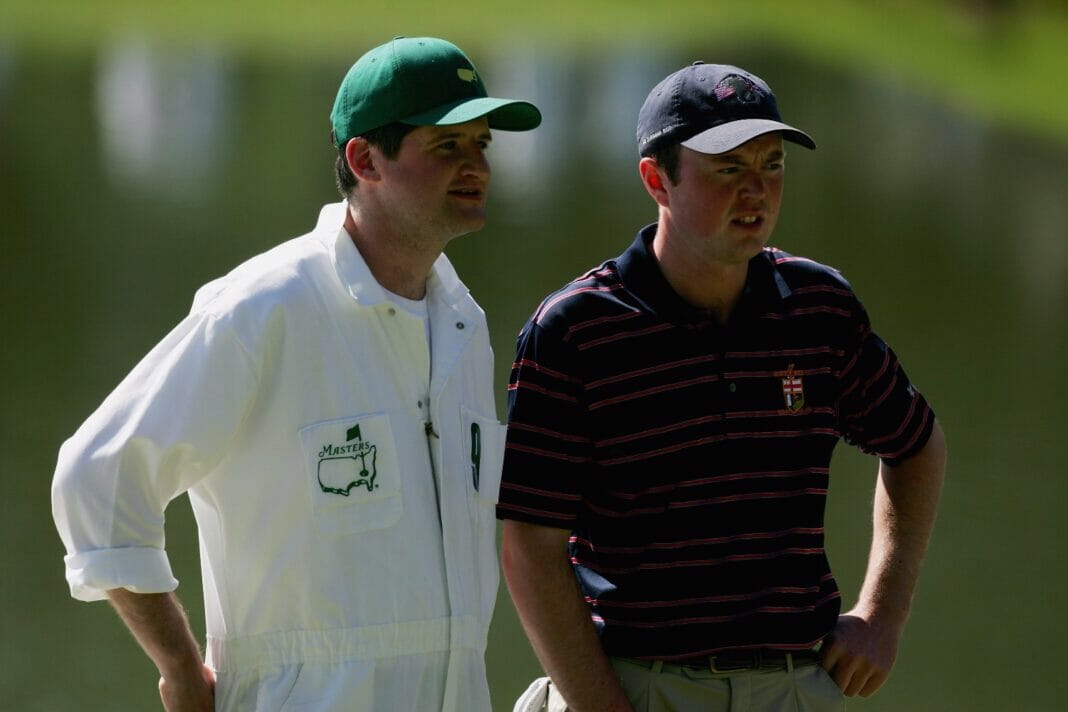 It’s 11 years since Brian McElhinney turned off Washington Road onto Magnolia Lane and the simple truth is that some Masters memories remain clearer than others.

A decade and more of life in the professional game can make one tournament seem very much like any other. A lot of water has passed under the bridge. Numerous events, thousands of shots, tens of thousands of miles travelled since he stepped onto the first tee at Augusta National.

“On the first hole of the opening round I hit a great drive and was kind of in between a six and a five and I hit the five, a lovely shot to the middle of the green but it rolled off the back,” said the Burnfoot born 34-year-old.

“I remember the pin was also near the back and all I was thinking standing over the chip was ‘if you can make five here, you’ll be doing well!’ I never even considered making four, it was such a tricky shot.”

Brian earned his place at the 2006 Masters courtesy of a 5&4 British Amateur Championship victory over Scotland’s John Gallagher at Royal Birkdale in 2005. A winner of the Individual European Championship at Nairn in 2003, he was recognised as one of the world’s best amateurs and went on to represent GB&I in the 2005 Walker Cup at the Chicago Golf Club.

“You are aware that getting to the Masters is a potential bonus for winning the British Amateur but you’re not giving it any thought at the time,” added the Donegal man. “You are thinking too much about the matches you have in front of you. When you’ve won it, you start giving it some thought and then the invite comes through the post around Christmas. That doesn’t happen very often, it was great.”

Brian flew out to America three weeks before The Masters to prepare for the tournament. He also had to play in the Georgia Cup – a one-off match pitting the Amateur Champion against the US Amateur Champion at the Golf Club of Georgia in Atlanta.

He actually managed to win the Georgia Cup, beating future Ryder Cupper Edoardo Molinari 3&2 but his focus was already on Augusta. “There were a few scrappy holes, but I was delighted to have come through,” said McElhinney to the waiting media after his win.

“It’s good preparation because the greens are so fast here and it makes you think about course management. It’s definitely going to be exciting next week, but nerve-wracking as well.” 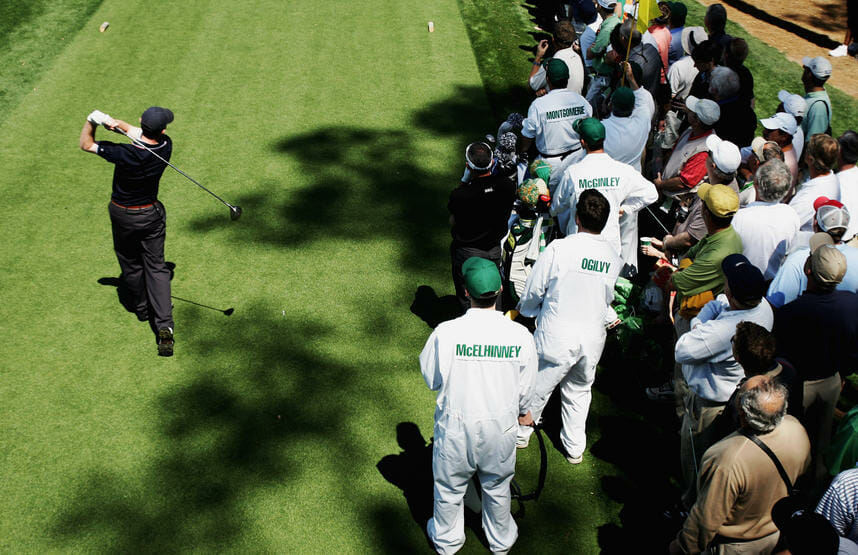 He also made sure to make a couple of acclimatisation trips to Augusta before tournament week.
“You have to take a caddy, you go out on the course and it’s strange because you’ve only ever seen it in pictures and on television and there’s always thousands of people around,” he said.

“In terms of preparations it was good and I got a good look around. It was obviously exciting and it was different and it was something that you never imagine you will ever experience, making that drive up Magnolia Lane and that sort of thing.”

He set out to savour every moment of the experience, stayed in the Crow’s Nest for a night and met up with Paul McGinley and Padraig Harrington for a practice round. “That was nerve-wracking, playing with top players but it was good from the point of view of getting ready for the tournament,” he said.
“I played in the par three tournament and I think I was three under after five but I had a bad finish.”

“I played with Stephen Ames and Zach Johnson (a future Masters winner). I wasn’t even aware of the tradition of asking family to caddy. My dad, my mum and my brother had flown over but my normal caddy Stephen O’Donnell did the job.”

“Stephen was great. When we were on the putting green he’d be asking guys who they were playing with so I ended up playing a few holes with Luke Donald, Rocco Mediate and Colin Montgomerie. I had played with Jim Furyk at the Open Championship in Troon in 2004 so I also joined him for a few holes as well.”

It all helped settle some of the nerves but when the tee times were released for the opening rounds McElhinney found himself paired with the reigning US Open champion, Michael Campbell, and golfing royalty in the form of Tom Watson.

“The only way you could deal with it was to try and take it like any other tournament,” said Brian. “They were both very good to play with and Tom obviously loved coming to Ireland. I was nine over after 12 holes of that opening round and I wasn’t doing an awful lot wrong.”

“I was hitting the ball well enough. I just seemed to miss the greens on the wrong side and struggled to get up and down.”

He carded an eight over par 80 which included just one birdie at the par three 16th but he improved significantly on day two, signing for a three over par 75 and a two-round total of 155, 11 over par, the same score as Paul McGinley.

He continued; “It’s not that I hit the ball any better on the second day. It was that my course management was much better and I was probably a wee bit better around the greens as well. I hung around and spectated for the next two days after missing the cut. That was The Masters Phil Mickelson won so I soaked up the atmosphere, it was nice to experience it from outside the ropes.” 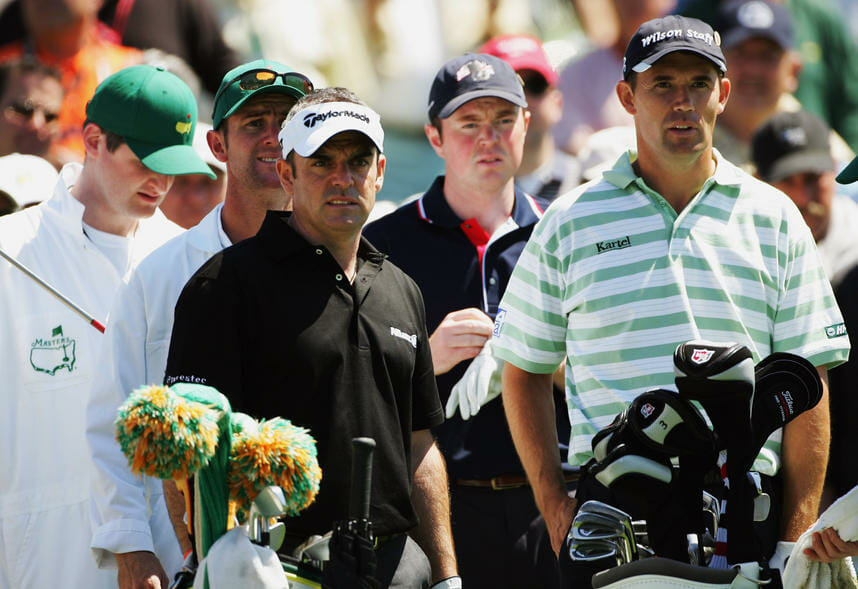 The Masters marked the end of Brian’s amateur career. At 23 and with nothing left to accomplish he turned professional, pitching up at the Tessali-Metaponto Open di Puglia e Basilicata on the Challenge Tour at the end April for his pro debut.

“I never had any doubts about turning professional. I had done everything I could in terms of amateur golf,” said Brian. “The funding from Team Ireland was there, I was ready to give it a go.”

He focused on the Challenge Tour for the rest of 2006 recording his best finish – a tie for 12th – at the Ryder Cup Wales Challenge but then failed to make it through Euro Tour Q-School. He turned his attentions to the EuroPro Tour and won at Roganstown in 2007 and then followed that up by winning again in 2008, this time at The Shire, outside London but the breakthrough onto the main European Tour eluded him.

“It’s hard to pinpoint why. It could be a lot of things,” he said. “Certainly when I initially turned professional I did find the switch from playing mostly links style golf to playing inland/parkland courses tough. I struggled a bit, even just visually.”

“There’s also a lot more travel involved and you are on your own a lot more. You leave that ‘team’ environment which is such a big part of the amateur game. I think Team Ireland have done the right thing by getting Des Smyth on board. It’s obviously good to have someone who has been there and done it and knows what’s involved.”
“For guys that are turning professional maybe they don’t totally understand exactly what is needed in terms of travelling, what you need at a tournament, how long you need to be there, even who you need to bring with you? So, it can only be of benefit to have somebody to possibly help along those lines.”

He continued “It is and was frustrating when you know that you are not producing the type of golf that you are capable of. Obviously you want to keep moving up the ladder but, at the end of the day, that’s the game, that’s the career path I decided to follow and I’ve done pretty well.”

Far from being deflated, Brian’s competitive instincts remain strong and having taken some time away from the tournament scene to focus on getting his PGA qualifications he is now gearing up for another crack at playing full-time tournament golf. “It’s all about how you look at it. I played in two Open Championships (2004/2005), The Masters and won the odd time. You always hope to do better but you never know. I’m going back to give it another go.”

Now married to Sharon and with a two-year-old daughter, Cara, Brian is a proven winner on the PGA in Ireland circuit. He has been based at North West GC since qualifying in 2015 and admits he has enjoyed teaching but he has now set his sights on a return to the Europro Tour. He has certainly been playing well over the winter, dominating Alliance and PGA in the North of Ireland events at links venues across Ulster.

“The PGA qualifications have given me some added security,” he said. “From the end of the 2016 Irish Region season and through the winter I have been playing quite well. Last year I intended to go back playing a bit, just to see how it went. I was playing well, so I played a bit more.”

“I haven’t been doing an awful lot of practice but I have been doing a lot of playing. I never really intended to try to get back on the EuroPro Tour. My plan was to play a bit more on the Irish region but then an opportunity came along – with the help of a sponsor – to go back and play.”

“I will try and fit in a few PGA in Ireland tournaments when I can and I may try to get into the Challenge Tour events in Ireland but really, I want to try and stick with the Europro for the next couple of years to see how it goes and give myself the best possible chance to make it there and with any luck onto the main European Tour.”

Its been a long road since 2006 but lets hope Master McElhinney has a great 2017.