What were two Irishman, both brothers and one a 2016 Olympian, doing sitting watching a game of cricket in a stadium that 60-years earlier played host to an Olympic Games?
No, this is not an Irish joke.

It was the penultimate day of 2016 and Seamus Power, the youngest of four brothers, along with Willie, his Aussie-based brother, found themselves with tickets to the fifth and final day of the Australia versus Pakistan Second Test match in Melbourne.

After four rain-plagued days, the Power brothers were heading to the Melbourne Cricket Ground (MCG) not for one second having any inkling of what would unfold.

The MCG holds just over 100,000 spectators and that was about the number back in 1956 who were in attendance for the Opening Ceremony in 1956 when Melbourne played host to the Olympic Games.

But on this day Seamus and Willie were among just a few thousand die-hard cricket followers who turned-up expecting a tame draw and an early finish.

After four frustrating rain-interrupted days Australia led by 22 runs before emerging on this fifth and final day and proceeded to add 159 second innings runs so as to lead Pakistan by 181 runs when they declared at 8-624 or if you live north of the Equator that’s 624-8.

For Pakistan to draw the three-Test series at 1-all they needed to score 182 runs.
“What then unfolded was unbelievable and it had my brother and me on the edge of our seats,” said Power. 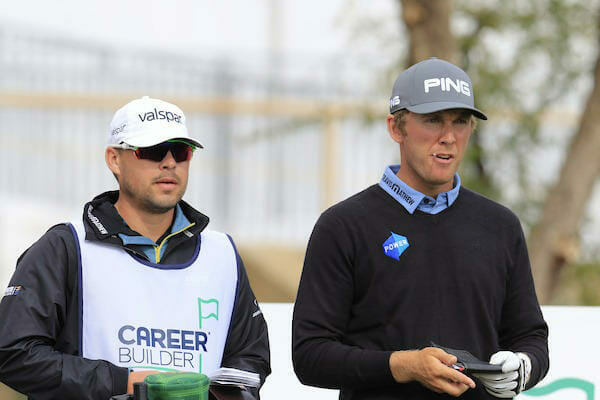 “There wasn’t that many at the ground given the foul weather the prior four days, and no-one really was expecting what would unfold, but the atmosphere was just electric,” said Power.
“Pakistan just buckled under a relentless Australian attack and it was one of those great days in sport where you didn’t have to be a cricket fan to enjoy it. So, after arriving at the MCG and expecting an average day’s cricket we got one of the most exciting sports events I’ve been to for a long time.  It was just amazing.”

“It’s again another example of the uncertainty of sport”.

Uncertainty!   That’s a word that Power will again use when I caught up with Ireland’s newest PGA Tour member at the recent CareerBuilder Challenge in Palm Springs.

But back to Australia as Power had travelled ‘Down Under’ to spend Christmas with one of his brothers. Of course, being a PGA Tour pro it was a case of ‘have clubs will travel’ with Power enjoying playing a few rounds at the renowned Lake Karrinyup course, host to a number of leading Australian and European co-sanctioned events including the most recent ISPS Handa World Super Six Perth.

For those who viewed coverage of the event there was the all too familiar sight that greets everyone taking to the Perth golfing gem – “We must have counted about 20 kangaroos on every hole,” said Power.

“They were everywhere and just lazing about all over the course. It was pretty weird at first as I don’t think I’ve ever played a golf course where you get so much wildlife wandering about.  You get alligators playing golf in Florida but nothing like what I saw in Perth”.

Refreshed and recharged Power left the world’s remotest capital city and headed back onto the 2016/17 wraparound PGA Tour schedule.  He had contested five events prior to Christmas missing the cut in the opening Safeway Open but then playing all four rounds in the next four, including a best finish of T28th in the OHL Classic at Mayakoba or ‘Mexico’s Major’ as it is commonly known.

Of course, Power had brilliantly secured his PGA Tour card on the back of eight top-25 finishes in 21 starts on the 2016 Web.com Tour including a victory and two additional top-10 showings. It was an effort that saw him finish ninth on the Web.com Tour regular season money list to earn one of the first 25 PGA TOUR cards. He was then placed 22nd in the final priority-ranking order after two top-25s in the Web.com Tour Finals.

In simple terms, it means Power now enjoys full PGA Tour status but just like his European Tour rookie counterparts, as a rookie member there is now various re-rankings or hurdles he faces.
In fact, the PGA Tour advises there will be six ‘reshuffles’ throughout the year.

Four from last year’s top-25 have automatic 2017/18 PGA Tour status in winning on the 2016/17 schedule and they include: Cody Gribble (Sanderson Farms Championship), Rod Pampling (Shriners Hospitals for Children Open), Mackenzie Hughes (The RSM Classic).
As at the Genesis Open reshuffle Power was ranked 11th and therein lies the uncertainty for the Irishman not knowing when he will compete on the main Tour.

Post the Christmas/New Year break, and up to an including the Genesis Open, Power competed in a further four PGA Tour events with a best of T21st in the CareerBuilder Challenge at Palm Springs.

That included a start in the Farmers Insurance Open, and the same week Tiger Woods returned to main competition for the first time in some 17 months, but then both he and Woods failed to win through to the weekend rounds.

As at the start of the Genesis Open Power was ranked 113th on the FedEx Cup standings with earnings of $US 201,963.

“The big goal this year is lock-up my Tour card. I still don’t have a full Tour card as it’s just conditional at this stage so the most important goal for me is to finish the year inside the top-125,” he said.

“If so, it just makes it so much easier going forward in my career but then the biggest problem is the uncertainty of when I am going to play next. It makes it tougher on your mind not knowing if you are going to be playing.”

“Of course, my biggest focus is trying to get that first PGA Tour win and that’s why it makes it so important that if I do get into a PGA Tour event I grab my chances strongly with both hands. I’ve had some okay performances in the starts I’ve got in this wraparound schedule and I know with the momentum of playing each week I can finish top-125.”

“I’ve been able to handle the first six weeks I’ve been out here but then the next six months are a little unclear given I just don’t know standing here where I will play next.”

“I will get into events such as the Reno Open but then it was great to get into the AT&T Pebble Beach Pro-Am but I didn’t play the Genesis and won’t be at the World Golf Championships. So, you just have to accept that and deal with it.”

Meeting the three-time Major winner in Rio for a first time ahead of both representing Ireland was definitely one of those bucket list moments for Power.
“It was the most nervous I’ve ever been for a long while standing there on the first tee in Rio and playing my practice round with Padraig”, he recalled.

“Padraig’s been an idol for Irish golf, always has been.  It was good to get to know him a little bit and play with him.  He was very helpful as was Paul McGinley, Ireland Olympic Team Captain, and Ronan (Flood). I just learnt so much that week and those guys couldn’t be any more helpful. They are not afraid to share what they have learned. They have confidence in themselves.”
And since they were paired in Rio, Power has sought to catch-up with Harrington in the two events they have each contested in 2017 proper.

“It was fantastic to catch-up with Padraig at Torrey Pines where he was starting his New Year”, said Power. “I had been picking Padraig’s brain quite a lot when I was at the Olympics and just getting some advice for the year, and then I had dinner with Shane (Lowry) last year during the Wells Fargo.”

“Of course, Padraig’s busy trying to figure stuff out as well so I never really try to annoy them too much but it is great now, knowing them as I do, that I can walk up to guys like him and Shane, as every little bit of advice I can get from those guys will be very helpful”.

And Harrington’s confident Power can make the grade and retain his PGA Tour card this season, and go on and forge a career for himself on the world’s greatest golfing stage. “Seamus is a strong player, a big hitter of the ball and it won’t surprise me at all that he will do very nicely here on the Tour”, said Harrington.

“I also think he can become a PGA Tour winner once he gets himself comfortable out here. I know what he’s going through at present, as I have been paying a lot of attention to him since we were partnered in Rio, and that’s trying to wrap-up his Tour for next year.”

“But my advice to him is to realise that he is a good player and just be patient because, as I said, when he gets himself comfortable in his new surrounds he will show all of us how good a golfer he can be.”

“He had that great season last year on the Web.com Tour and managing to win which, given the standard now on the secondary Tour is not easy, so knowing he can win out here will help enormously. So, I don’t worry about Seamus as he’ll be okay.”

And if Power needed any reassurance of the uncertainty in sport on that December 30th day in Melbourne, Australia he got another taste of that just a few weeks ago when his favourite NFL team, the New England Patriots came from nowhere to brilliantly capture Superbowl 51.
“I’m not on the PGA Tour just for one year just to compete and get off,” said Power.

“My goal is to win and what I’ve managed to achieve in the handful of events I’ve played is something to build on”.

There’s that old saying that everyone struggles at some point in his or her life with uncertainty.
And as Harrington rightly points out, just give Power a little time and he’s certain to be assured of a long and profitable PGA Tour career.