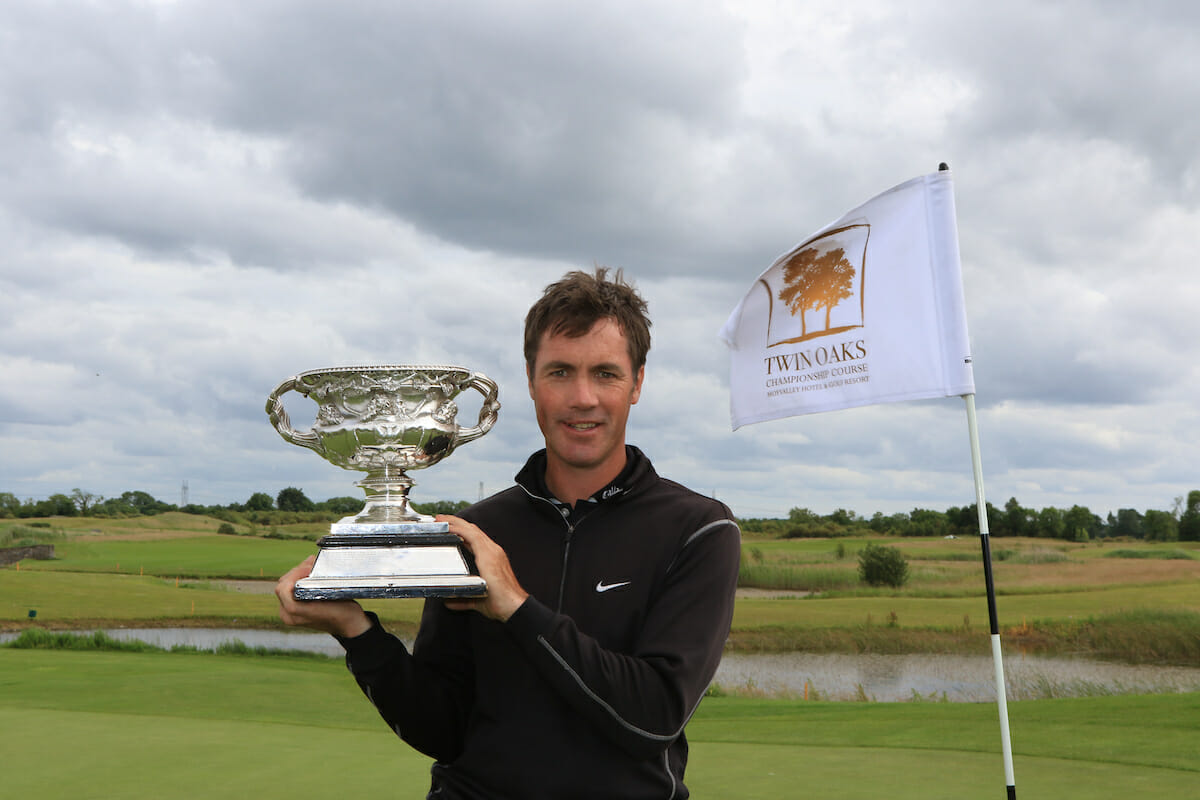 Tim Rice is in rejuvenated mood after his recent win at Moyvalley in the Irish PGA Championships and Ivan Morris caught up with him to find out what is the reason for this resurgence in form.

IGM – After such a long time in the doldrums can you put your finger on why, out of the blue, you performed so brilliantly at Moyvalley when winning the Irish PGA Championship?
TR- I would dispute that it was ‘out of the blue’ – I did put in 10-years of intense study and hard practice (smiling). But, seriously, I have always searched for better ways to swing a golf club. In September last year I hit on ‘something’ that has made a significant difference and unusually for me I have stuck with it. My golf has been improving ever since and I am now shooting lower scores more often.

IGM – Pray tell, what was the discovery?
TR-It revolves around my head position at address. In my youth, I learned to set-up with a classic reverse K – the left shoulder high and my right shoulder low – which quite apart from encouraging inconsistency – caused me terrible back trouble. Now my shoulders are level at address with one vital addition: my head is cocked to the right so I watch the ball with my left eye which is what Nicklaus and Hogan used to do.

IGM-So, you are a late disciple of set up and posture being the most important ingredient in a sound method?
TR-In a word – yes.

IGM-Were you nervous playing the last few holes at Moyvalley? Did it affect your swing or tactics in any way?
TR-I wasn’t nervous at all. I was well ahead most of the way until Colm (Moriarty) came at me with some low figures and closed the gap. But, I was in the ‘boring’ one shot at a time mode and only thinking of how my next shot was going to be the best shot I could play.

IGM-After hitting an ultra-defensive/conservative tee shot (5-iron) off the tee, were you thinking of playing an aggressive fairway metal with water in play for your second shot on the last hole?
TR-The 18th at Moyvalley is a fantastic, if complicated, hole with an unusual lay-up due to a meandering stream. It was an 8-iron or fairway metal decision. As Colm had driven into the water before me and I was essentially 4-ahead, I decided to finish the week by playing ‘a golf shot’. It was a match play situation. I had it won and I was comfortable.

IGM-Were you able to draw on your experiences of winning as an amateur and also on the EuroPro Tour all of 13-years ago?
TR- Thankfully I have a good memory. Above all, experience has taught me a certain immunity to the up’s and downs of the game and a realisation that I can only hit this shot here now at this moment. Buddhist Golf, I suppose?

IGM-What happened in 2004 that put a halt to your progress? You won three times on The EuroPro Tour that year. Was the step up to the Challenge Tour THAT significant?
TR-Nothing to do with that. By 2004 I was searching for a coach who would help me find a consistent swing that didn’t hurt my back. I tried all of the highly recommended coaches in Ireland and some abroad. All good in different ways but that was the problem. They all said something different. Serendipity brought me to Jimmy Ballard in Florida who was known for his ‘pain-free’ connected swing. I was blown over by the simplicity of his teaching. I won 6 weeks later on the Europro and mercifully have had no hint of injury in all the years since. Then came the winter of 2005 and I started to do further research into the theories of golf. I went ‘off the course,’ so to speak, on a mystery tour of the golf swing. It was a mistake to do this unsupervised in hindsight. While it has helped me greatly in understanding the game and I can use the knowledge gained when I am teaching others – you can’t be a ‘swing researcher’ and a player at the same time. That was my biggest mistake.
I blame the culture of ‘golf curiosity and a kind of madness’ I grew up with at Limerick Golf Club. My various mentors, including the interviewer in front of me here, and my father, had a fascination with the game. Perhaps, I should have paused before fully entering their golfing asylum?

IGM-Are you still too focused on technique and seeking perfection when we all know perfection isn’t possible?
TR-The word technique sounds complex and it gets a bad rap sometimes. Technique to my mind is simply preparing your body for action. The golf ball knows nothing and only reacts to the laws of physics. Physics is simple cause and effect and so is golf but it can take a while to discover that.

IGM-What is your attitude towards the pursuit of a watertight technique now?
TR-It’s essential for good golfers to have a simple technique that is watertight but it can be an uncomfortable journey getting there. Funnily, to get this watertight technique involves more deletion of information than addition (a la your Hagen dictum) – students are almost always tied up in ‘tips’ that don’t last.
It’s a joy to play golf now as I’ve eliminated the ‘destructive shot’ that ruined so many potential good scores. That reverse K position was partly to blame. It may have been designed for loopy draws for more distance when the golf ball didn’t travel as far.

IGM-Were you disappointed that your Irish PGA win did not win you a place in the Irish Open?
TR-Not really. It came too late – next year, maybe?

IGM-How aware of the history of the Irish PGA Championship, are you?
TR-I’m very aware and slightly in awe that my name will be on the plinth beside some of the greats.

IGM-What are your plans and ambitions for 2018 and going further forward into the future?
TR-My new approach has lasted all of 9-months already. It must be a record! I’ll see where that takes me. Maybe I have finally run out of mad ideas? I would definitely like to help aspiring pros to avoid the dark alleys I found myself in.

IGM-What would be your advice? Why do you think so many fail to achieve their goals?
TR-There is no simple answer. It’s a big grey area. To be fairly sure of succeeding (have any chance, really) one would need to be at the very top of the tree as an amateur, first of all. The problem area is for people below this level who badly want to give it a go. It can definitely be done but I think only through good coaching and mentoring; on your own it’s nearly impossible. You start with the fundamentals and go from there. That’s why the Swedes, French and Australians are so successful. If you can find the ‘right technique’ that suits you and work hard who can say if you will succeed or won’t?

IGM-Are you still in love with the game or, has it become a chore?
TR-I must love it! To be honest I cannot ever see myself giving it up even if there were times when it seemed the game gave me up.

IGM-Thank you, Tim, and the best of luck always.

This article is from the latest edition of Irish Golfer Magazine.  To read the full magazine digitally click here