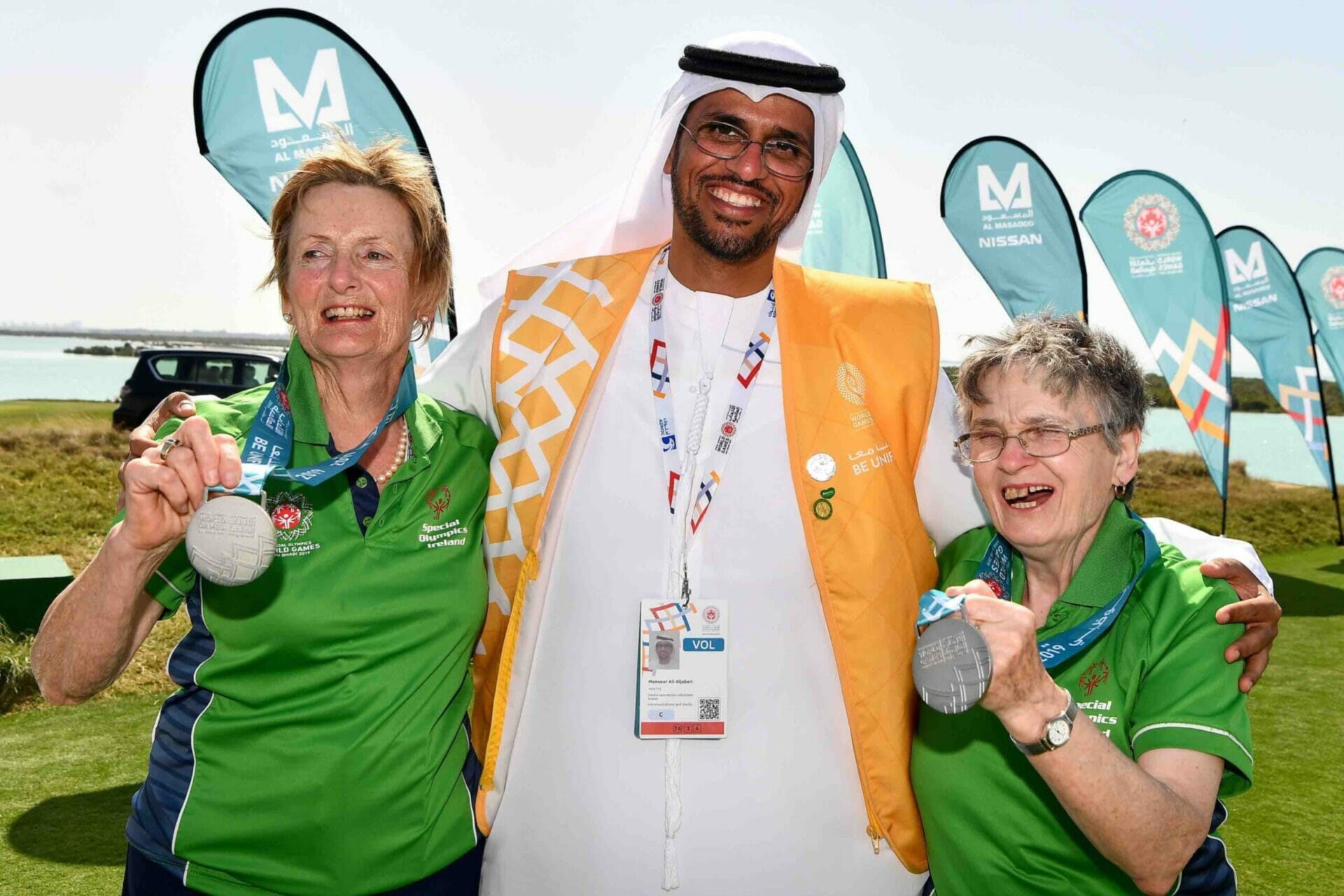 Special Olympics Volunteer Mansoor Ali Aljaberi with Team Ireland's Mairead Moroney, a member of the Ennis SOGC, from Ennis, Co. Clare, who has the distinction of being the oldest athlete at the Games, and her Alternate Shot Team Play Partner

Ireland’s golfers received a hero’s welcome in Dublin following an incredible medal count at the Special Olympics in Abu Dhabi.

As the final day of competition concluded, Team Ireland emerged victorious with an incredible medal haul of 86 medals. Having secured 30 gold, 29 silver and 27 bronze medals across a variety of sports, Team Ireland athletes have had huge success in what has been a remarkable week of sport.

Competition concluded this afternoon in a number of sports, including swimming, athletics, gymnastics, badminton and golfing events, which teed off at the Yas Links Abu Dhabi Golf Course.

And golf was without question the highlight of the day, with four gold medals, a silver and a fourth-place ribbon for athletes in their individual events.

Claiming gold for Team Ireland were Simon Lowry from Loughrea, Co. Galway who went one better than his namesake Shane in winning a coveted Olympic medal. Dublin athletes, Mark Claffey from Blackrock and John Keating from Templeogue also triumphed while Andrew Simington from Dalkey alongside playing partner, Phyl Kelleher from Rathfarnham also struck gold for Ireland.

Meanwhile, Co. Clare athletes Mairead Moroney and Jean Molony, both from Ennis, claimed a silver medal at the event.

The Clare golfers travelled east as part of Team Ireland’s 91 strong squad and added to an already colossal medal haul as Ireland continue to strut their stuff on an Olympic stage with one more day to go.

The duo will undoubtedly inspire athletes for many moons to come but perhaps Moroney eclipses her partner in crime having not picked up a golf club until she was in her 60s. 69 years young now and she’s an Olympic silver medallist and the oldest disabled athlete out of roughly 7,000 competitors at the Games. 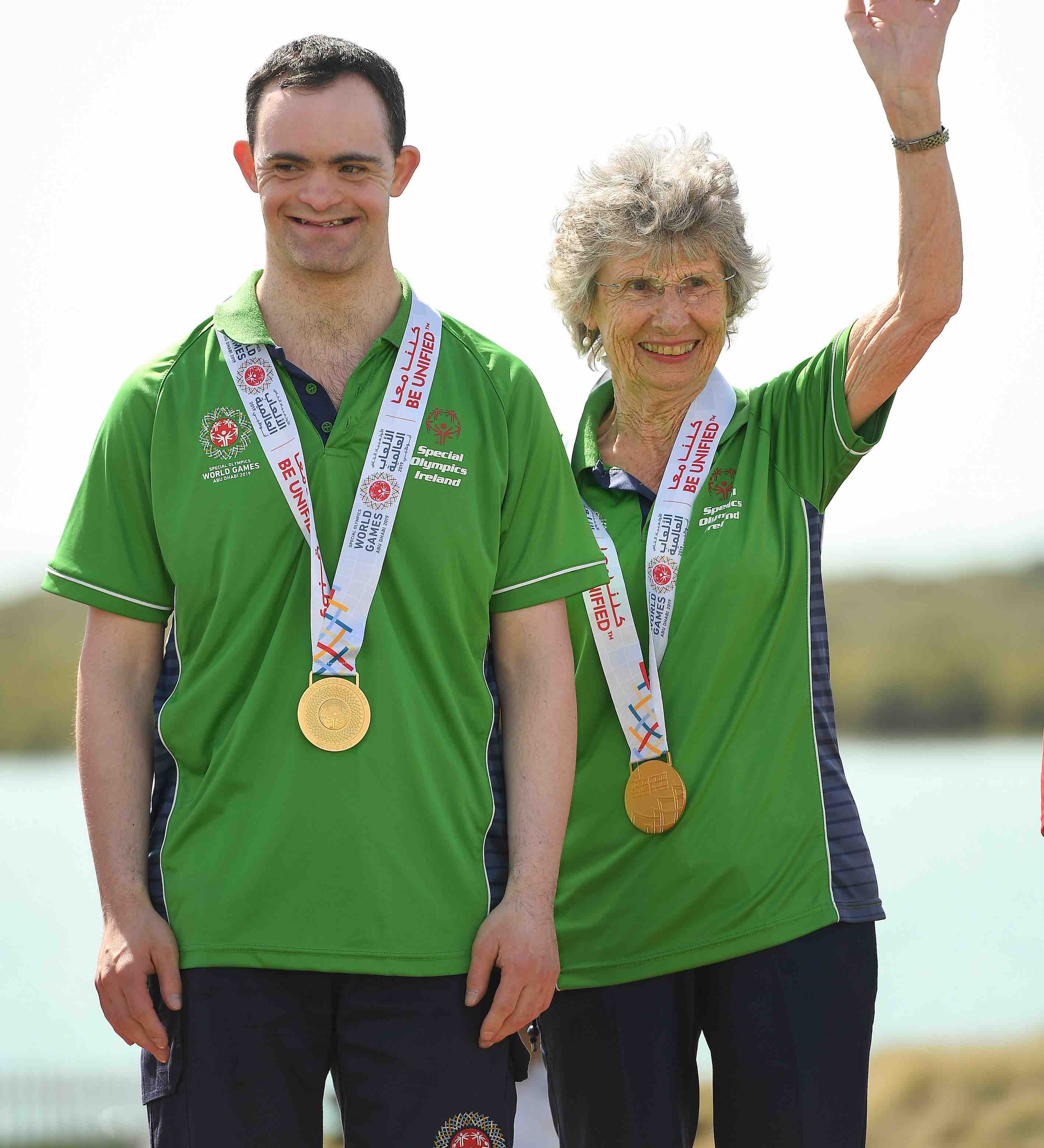 “This week has seen fantastic results from all of our athletes and we couldn’t be happier with the hard work and determination they have demonstrated in each of their events. It has been inspiring to watch our athletes compete with integrity and to come home with such an incredible medal haul is the cherry on top of what has been an unforgettable week for all of us.

“We have had a wonderful couple of weeks in the beautiful surroundings of Abu Dhabi, and we are certain that our athletes will travel home with much more than just medals. They have made lasting friendships and memories that will stay with them for a lifetime and that is exactly what we hoped to achieve.”

Final results and medal ceremonies will be confirmed tomorrow, ahead of the closing ceremony, which will take place at the Zayed Sports City Stadium. The event will bring the Games to a close, with a star-studded line-up including performances from Special Olympics global ambassador Nicole Scherzinger, and Keala Settle, star of The Greatest Showman.

Team Ireland will return home on Friday, 22nd March, arriving into T1, Dublin Airport at around 2.30pm with medals, friendships and memories to last a lifetime.

It’s 7,624 kilometres from Abu Dhabi to Dublin and here at IGM Towers, we hope our heroes enjoy every metre of the journey home. Great playing Team Ireland. You did the country proud.