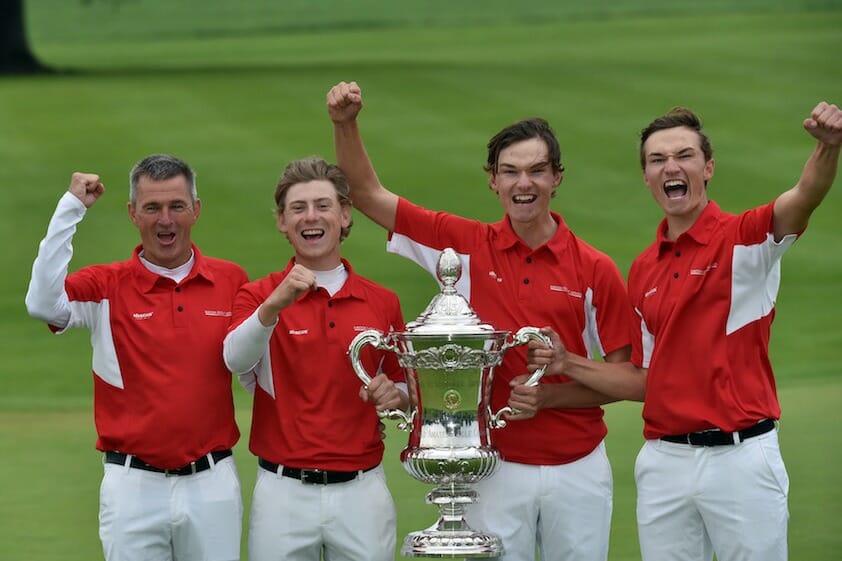 Ireland finished with aplomb in the closing round of the World Amateur Team Championship to share 10th place as Denmark claimed the Eisenhower Trophy by one shot on 39 under par.

The Danes posted 13 under on the O’Meara Course to win gold ahead of the United States. Spain edged New Zealand for the bronze with Ireland tied for 10th on 27 under par alongside Germany.

For the hosts it was a memorable championship even if their title dreams were dashed during Friday’s third round on the Montgomerie. Twelve shots off the lead at the close of day three, Ireland’s best hope was a top-10 finish. Thanks to a 68 from John Murphy and a 69 from Robin Dawson, Ireland improved by nine strokes as they signed off in style.

“It was a great week,” said Ireland captain John Carroll. “Unfortunately yesterday knocked us out completely. Three players didn’t play up to scratch and that happens in golf. There’s nothing you can do about it.”

Unable to keep pace with the front-runners in the penultimate round, Ireland found themselves falling from second to 12th and such was the standard in this championship, a nine-under return on day four could only move them up two places.

“I’d have thought 27 under par around these two courses would have put us higher than we finished,” said Carroll. “I saw some guys playing out there and they certainly wouldn’t be lost on the tour.”

A bogey-free round of 68 from Kinsale’s John Murphy proved the highlight for Ireland at the end of a memorable week. In true showman style, Murphy birdied his final hole, the 9th, to secure Ireland’s place in the top 10. The 20-year-old kept the galleries entertained throughout, sinking long putts at the 17th, his eighth hole, and the 7th, much to their delight.

While it was a disappointing day for Portmarnock’s Conor Purcell, who finished over par for the first time this week, Tramore’s Robin Dawson kept the good vibes going, signing off with 69 to finish as Ireland’s leading individual on 14 under, which earned him a share of 13th place. Spain’s Alejandro Del Rey topped the individual standings on 23 under.
Ultimately, golf was the real winner at Carton House. Kind weather certainly contributed to the occasion but the performances were simply phenomenal, the combatants redefining the nature of elite play.

When Ireland won bronze two years ago their final tally was 18 under. Nine shots better this week, Ireland just about cracked the top 10. The home side might have been aiming to better that third-place finish in Mexico but this result still represents a significant achievement, and what’s more, for two days they were right in the hunt.

“Just being up in contention was probably the most enjoyable bit of it,” John Murphy reflected. “After the first round, we were all just in such good form. It was just a great day. It was a pleasure to be part of it.”

There were some lighter moments too, not least during the final round when Murphy spotted a familiar face in the crowd. Waiting his turn to putt at the 16th green, Murphy could not restrain a smile.

“My friends came up to watch,” Murphy explained. “They don’t have a clue about golf. I gave one of the lads a golf top and a hat and he was wearing it and going around tipping the hat. I was laughing at him because he just looked so out of place on a golf course. It was great to have him there. It was so nice to play in front of my friends and family. We’re not going to get the chance to play Eisenhower Trophy in my home country again.”

Asked for his highlight of the championship, Conor Purcell returned to the scenes at the start of the second round on Thursday.

“I was so nervous,” said Purcell. “There was such a big crowd and I was kind of feeding off them. I was the most nervous I was all week and I still played well. I just didn’t feel confident in what I was doing and I still pulled off the shots so that was pretty cool.”

For Robin Dawson, the golf was only part of it. His memory will be framed as much by what happened off the course.

“I like having the craic with the lads in the evening time, going for dinner and stuff like that,” said Dawson. “After the first day, we were all on a high after shooting a good round and we were all out in Avoca having something to eat. I like little moments like that.”

Wednesday’s opening round seems so far away now and yet the four days since have passed by in a flash. The time just flew. They must have been having fun.

The World Amateur Team Championships were hosted by the ILGU and GUI with support from Sport Ireland.