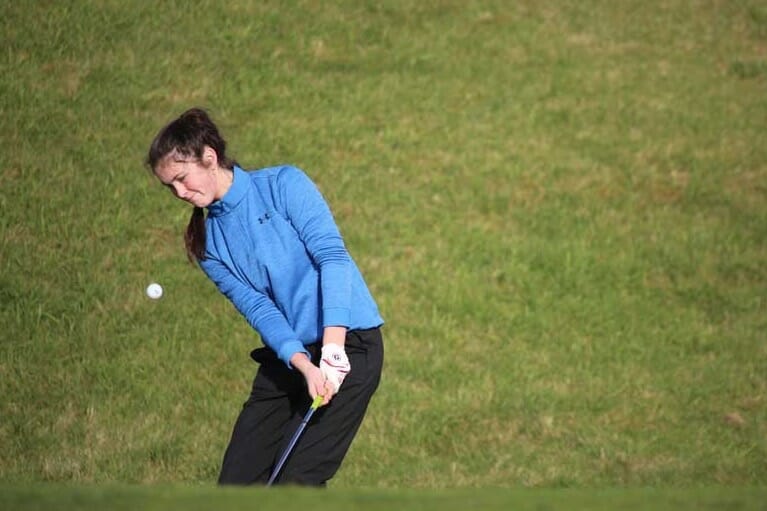 Aine Donegan (16) from Woodstock GC, leads the Irish challenge after progressing on four-over-par in a tie for seventh with the leading qualifier being Sweden’s Ingrid Lindblad who finished in style to top stroke play qualifying at the 90th Girls British Open Amateur Championship.

“I made double bogeys on both the 15th and 16th which was disappointing but I made a really good par with a 10 footer on the 17th and thankfully birdied the 18th,” said Donegan.

“It’s good to have a few more people around supporting me and I’m used to the wind and the links, even though I hadn’t played Ardglass before,” she added.

On a blustery day over the renowned links at Ardglass in County Down, Lindblad emerged from the third last group to be the only player under par and lead 64 qualifiers to the match play stage.

Claisse, also 18, who played in last year’s Junior Solheim Cup, posted two birdies and three bogeys in her 71 for a level-par aggregate.

Earlier, South African Caitlyn Macnab produced the round of the day on her championship debut. The 16-year-old from Johannesburg, who has Scottish heritage through her great grandfather, shrugged off a double bogey at the 11th to reel off seven birdies in her superb 67.

Macnab’s one-over tally was matched by another Swede, Ester Fagersten, who posted a 69 as she seeks to build on four domestic wins this season. The 16-year-old finished eagle-birdie, holing her 80-yard approach to the 17th from the rough.

The cut mark went out to 13-over-par, with the exact top 64 qualifiers progressing without the need for a card countback.

The highest-ranked player in the field, Italy’s Alessia Nobilio kept her title hopes alive on five-over after four birdies on the back nine, while Scotland’s Hannah Darling – winner of the inaugural Girls Under-16 Open Championship – qualified on seven-over.

Each match play tie consists of 18 holes, including Saturday’s final, with the qualifiers looking to follow in the footsteps of notable past champions Anna Nordqvist, Suzann Pettersen and new Ricoh Women’s British Open Champion Georgia Hall.