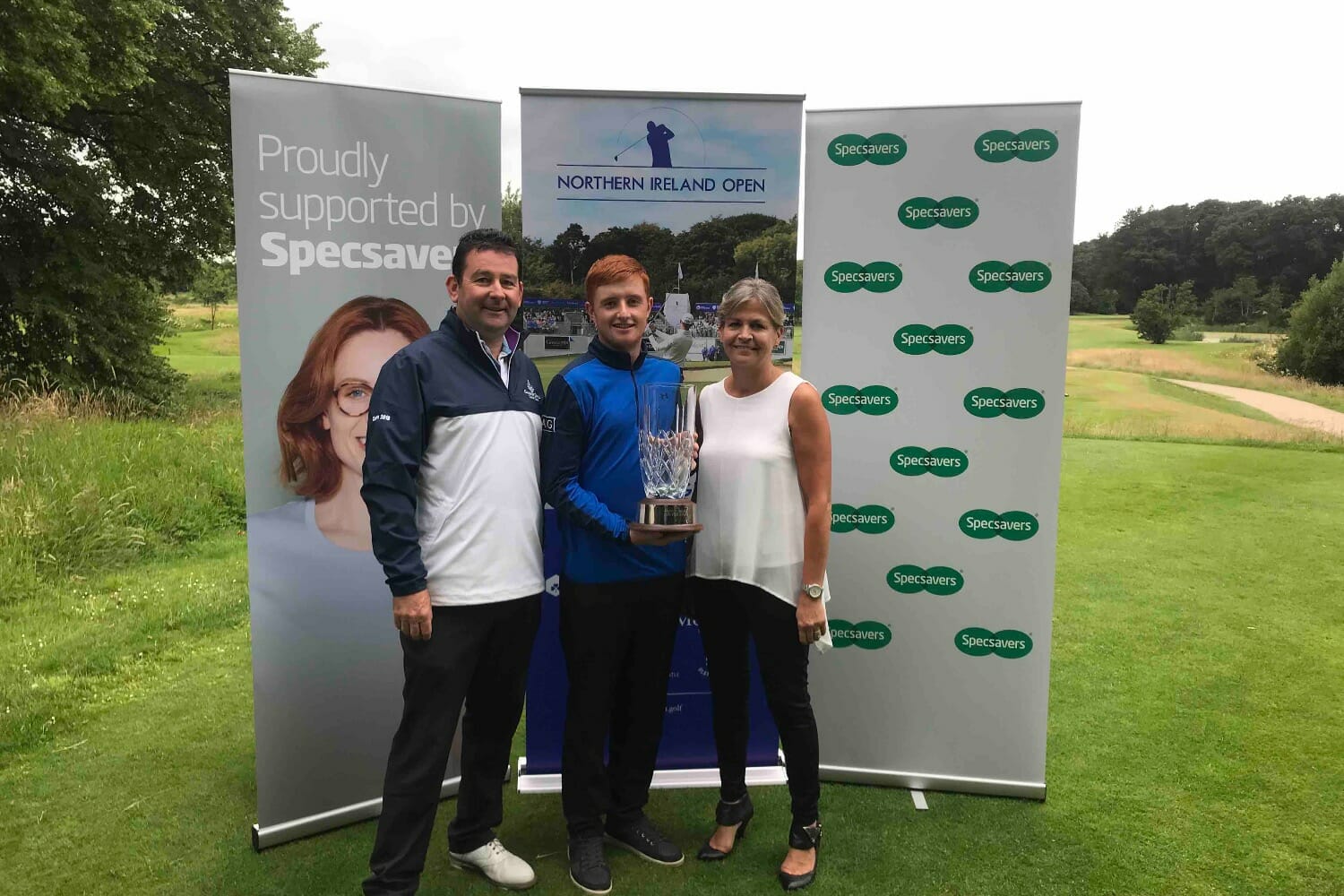 On a day of low scoring Ronan Mullarney came out on top to win the 2018 Modest! Golf Northern Ireland Amateur Open, sponsored by Specsavers Ballymena and Cleveland Srixon, at Galgorm Castle and with it booked his place in next month’s NI Open.

The Galway international was in sensational form, carding rounds of 67, 66 for a nine-under-par total 133 to win by three from Forrest Little’s Jack McDonnell (68, 68) in second. Local favourite and Galgorm Castle member Michael Reid took third with rounds of 70, 67.

Reid’s better afternoon card edged out Ardglass’ Adam Mulhall (68,69), who also finished on four-under 137. Mulhall continued his great form of late just days after reaching the semi-final of the North of Ireland at Royal Portrush.

Mullarney hit the front after his opening 67 and went on to shoot the best score of the afternoon too by going one better for his 66 to win comfortably.

The winning strategy was simple. “Keep it out of the water, the rough, the trees and hole a few putts,” said the plus four handicapper afterwards. Having started on the 10th, Mullarney covered the back nine in four-under 31 in the final round before picking up a sixth birdie of the afternoon at the par five ninth, his final hole.

Mullarney was part of the International Palmer Cup side that lost to the United States at Evian Resort, France two weeks ago and is now looking forward to teeing it up with the professionals at Galgorm Castle when the NI Open takes place from August 16-19.

“The invite to the NI Open was the main reason for playing here today. I really wanted to play in a professional event this year and I’m delighted to secure my place in the NI Open.”

The Paddy Harrington scholar at Maynooth University will now seek out Jordan Hood, fellow Maynooth scholar and Galgorm Castle member, for some extra practice at the Ballymena venue in the coming weeks.

“I might have to get a few more games here with Jordan. The course really suited my eye and I knew yesterday that I liked the place. It’s not a million miles from my home course,” added the winner, who is busy combining golf with his studies.

“I’ll play the South (of Ireland) and the (Irish) Close and some club golf, Senior Cup and Barton Shield between now and the NI Open. I actually have a college assignment to do to as well. I’m doing a Masters in Strategy and Innovation. It’s going ok, the golf is going better than the studies.”

Entry to the NI Open is free, simply register online at www.niopen.golf.