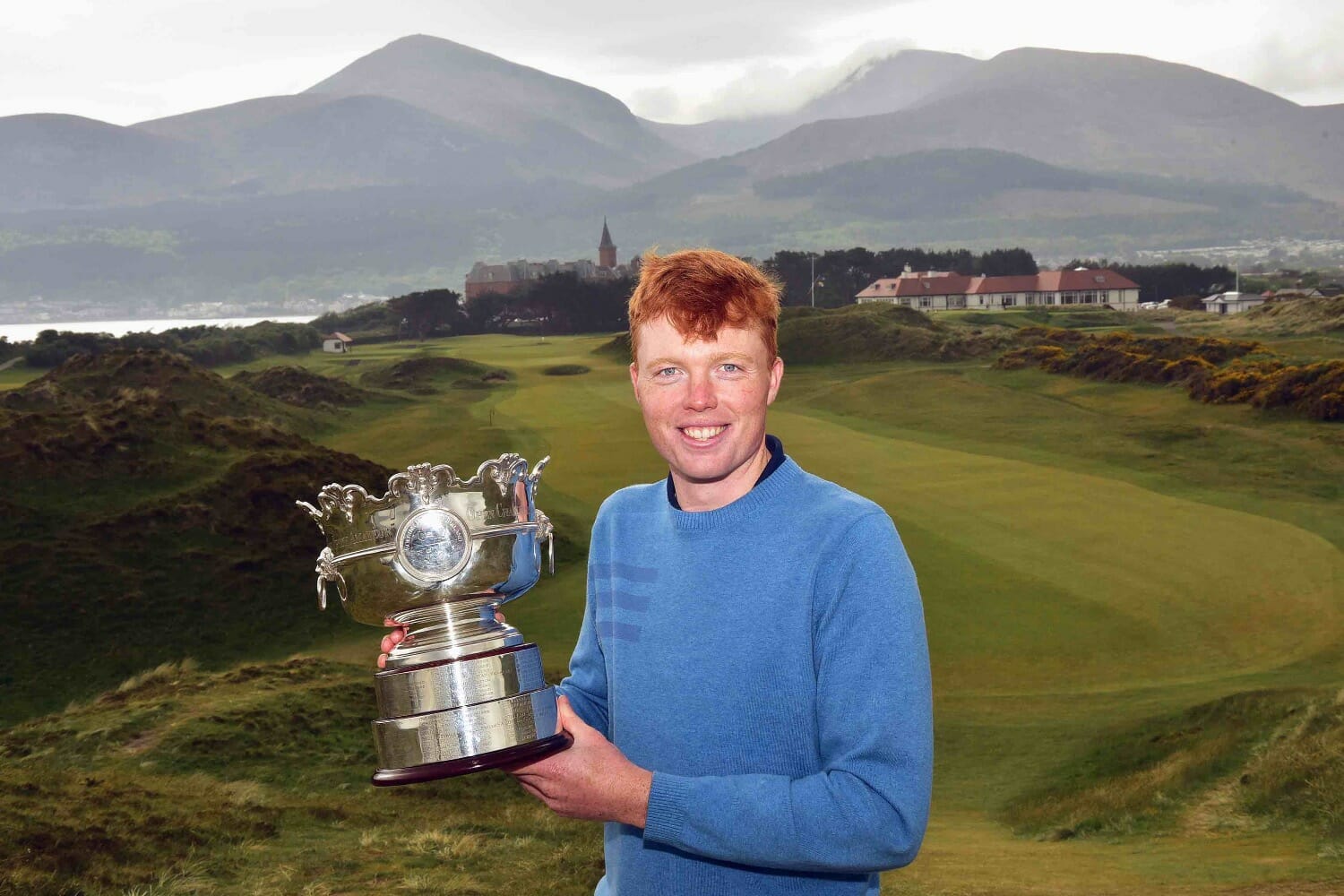 Tramore’s Robin Dawson held his nerve to claim a pillar to post victory at the Flogas Irish Amateur Open Championship at Royal County Down finishing four strokes clear of the field on-two under-par after carding a final round of 77.

The 22-year-old Irish international began the day with a six-shot cushion and while it was plain sailing for much of the afternoon, he very nearly lost his grip on the tournament at the 15th where he ran up a triple bogey seven after sending his shot into the gorse.

From what had seemed an unassailable position, Dawson saw his lead halved from six to three. Castle’s Alex Gleeson, playing alongside Dawson in the final group, was now in the picture but his hopes were dashed at 17 when he three putted his way to a double bogey.

Dawson could unwind at last: “I can finally relax after four days. There have been a few sleepless nights the last couple of nights, and I am just relieved. That’s the word.”

The champion emerged from the moment of victory with mixed emotions. Elation was obvious and relief was palpable. This win has been a long time coming.

“I have just been knocking on the door for so long,” said Dawson, who was Irish Boys Champion in 2013. “I have so many top-10s in these championships, especially in match play.

“I have gotten to quarter-finals and semis and been beaten on the last or something like that. But even with stroke play qualifying I know I am always up there. It was nice to do it over four rounds, especially at a venue like Royal County Down.”

Dawson was in control of his destiny from the first day. A superb opening round of 65 put him three clear and his position at the top was rarely threatened. England’s Alex Fitzpatrick, fourth overall on three over, briefly got within one shot during Saturday’s third round. Otherwise, Dawson has had it all his own way.

Measured in his approach, he has played smart, sensible golf and focused on precision over power. And if patience was his mantra, strategy has been the buzzword.

On Thursday he said: “It’s just about placing the ball in the right positions.” Following Friday’s second round he talked about the need to ‘plot your way around here.’ Approach play was key to Saturday’s 69 when he talked about playing with ‘discipline.’

That strategic frame of mind has been evident all week on the first tee. Instead of taking driver down the opening par five, his weapon of choice has been a two iron. He made birdie two rounds out of four and was unlucky not to gain another on the final day when he lipped out from 12 feet.

His playing partners, Gleeson and Fitzpatrick, both made four to gain a shot on the leader but Fitzpatrick gave his back at the second after finding the greenside bunker. Dawson coughed up a shot at the third when he failed to get up and down.

Dawson’s lead was cut to four when Fitzpatrick birdied the sixth but the leader responded by holing for a two at the seventh. After parring the eighth, Dawson had a seven-shot cushion as Fitzpatrick ran up a double bogey.

It was only then that the drama began. Both players came to grief on the ninth. Dawson lost his tee shot left and had to reload. Fitzpatrick went right and never saw his ball again. While Dawson managed to limit the damage with a six, Fitzpatrick’s challenge collapsed under the weight of a triple bogey.

Meanwhile Gleeson was inching his way into contention with birdies at eight and nine. On six under, Dawson led Gleeson by seven at the turn.

Gleeson gained another shot with a birdie at the 12th only for Dawson to hit back with a birdie on 13. Bunkered with his tee shot on 14, Dawson had to settle for bogey while Gleeson made par.

Standing on the 15th tee, the gap was six. By the time Dawson walked off the green, his lead had been reduced to three.

“I was basically comfortable until I got out ahead of it on 15 and hit a wayward shot to the right,” said Dawson describing a second shot that disappeared into the gorse. A triple bogey seven resulted.

“I am good at gathering myself and getting going again,” he insisted and although his tee shot was far from convincing on 16 he found the green with his second and made par. Gleeson matched him to remain three behind with two holes left.

After 17 the tournament was settled. In trouble off the tee, Dawson and Gleeson had to pitch their balls back into the fairway and try to make par the hard way. Gleeson caught the front edge with his third but Dawson came up short. From there he pitched it to four feet and escaped with a bogey. Gleeson, who had been so good with the blade throughout, three-putted, handing his opponent a four-stroke lead going down the last.

“I enjoyed that walk up the 18th,” said Dawson. “I know I shouldn’t have but I kind of got into a match play against the lads. I was watching what they were doing too much, and kind of got sucked into that with a couple of holes to go.”

Completing his round with a par at the last, Dawson signed for a 77 and at long last joined the list of championship winners in Irish men’s golf.

“There were a lot of players with championships and I wasn’t one of them, which really bothered me,” he reflected.  “I was practising hard, so I am delighted to get the main one, the Irish Amateur Open.”