Team USA got off to a great start in the singles on Friday when Brad Garrett won his opening tie against Martin White but there was no sign of a dramatic fight back.

Bob Daddano beat Liam Byrne and Matt McDevitt beat Colin O’Leary, who managed a hole in one at the third, but that was as good as it got for the USA.

“It has been a wonderful trip, the people are amazing, the facilities, the tournament it is very professional and we had a great team,” said California based McDevitt.

Ireland dominated the fourball and greensomes session on Wednesday and Thursday to take a huge lead into the final day where under King’s Cup rules, players receive two points for a hole won, one point each for a hole halved and nothing for a lost hole. Ireland needed just 176 points from the final 12 singles matches to pass the winning mark of 433 points.

“It was a brilliant week, really, really enjoyed it,” said Sean O’Gallachoir, the GM at Dunmurry Springs GC in Kildare. “It was a great chance to meet up with lads from across Ireland and of the of course the US. We’ll keep in touch now in the future. I won four up today. I just had a good day on the course, every once and while you have those days.”

Ireland set about chipping away at their points target and wins for O’Gallachoir, Pat Creamer, Michael Ryan, Declan McKeever and Darren McKeever set up Martin Smyth to grab the winning points from his halved match with Bob Silvestri.

“We would have loved to win but the camardarie that developed amongst the players is the most important thing,” said US Team Captain, Bob Butte.

“The values that Mr Palmer displayed throughout his career, his integrity, sportsmanship and commitment to excellence is at the heart everything we try to do with this event We always had ambitions to bring this event to the States and we’d love to see that happen next year. We will have 90 degree heat, we will play on bermuda grass and we will turn this thing around.” 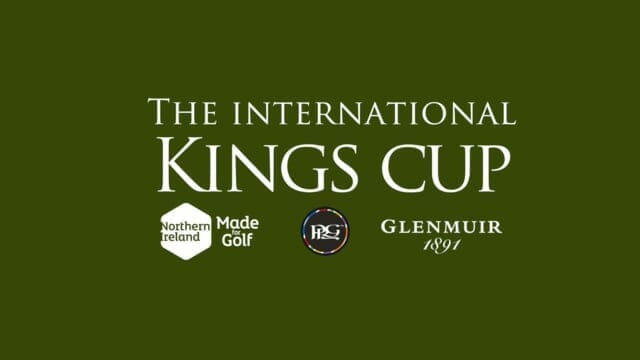