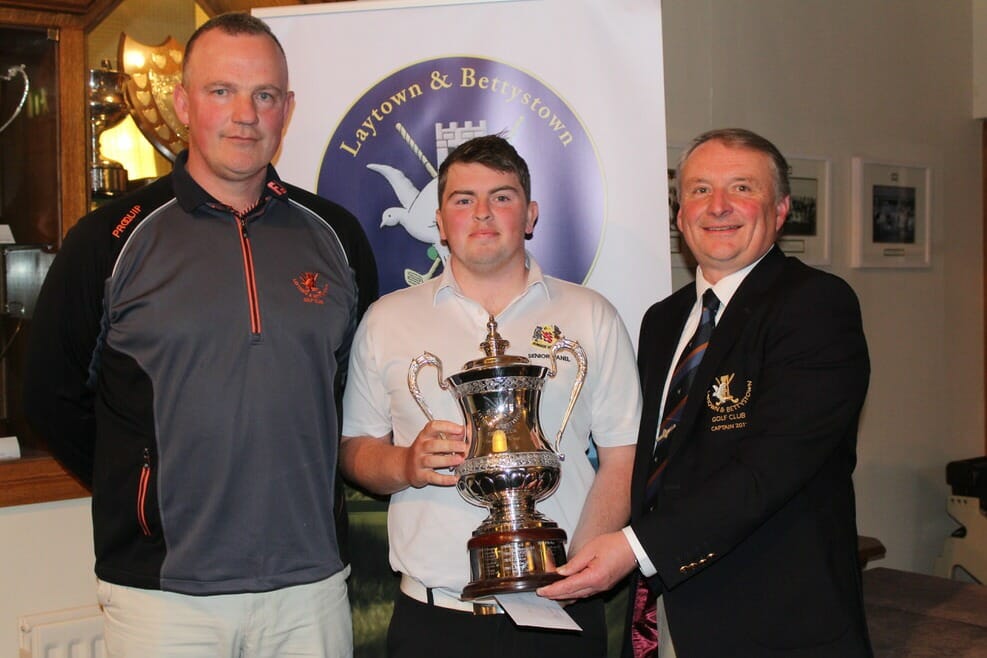 Dundalk’s Caolan Rafferty produced a strong finish to win the Laytown & Bettystown Scratch Cup for a second time on Sunday.

The 25-year-old birdied his final three holes to capture the 36 hole competition by one shot after shooting rounds of 70 and 66.
A shotgun start saw Rafferty teeing off both his rounds on the second hole and he admitted he was surprised to find himself only one shot off the lead after the first round.

“It was a cold morning and there was a bit of a breeze but I didn’t hit it that well and I just scrambled my way around with five birdies and four bogeys. I couldn’t believe it when I found out I was only a shot behind a group on two under as I thought somebody would have posted a decent score.”

Relieved to be still in contention, Rafferty knuckled down in the second round and produced some excellent golf as he roared around the famous Co Meath links with a five under par 66 that included seven birdies.

After parring his opening two holes, he then birdied the fourth, fifth and sixth, to move to four under for the tournament. A dropped shot at eight was cancelled out by a birdie 11 but he then bogeyed the 12th to move back to three under.

Last Tuesday in Portmarnock, Rafferty returned the best gross score in the Winter Alliance when he birdied two of the last three holes for a 69 and on Sunday he once again produced some sparkling golf over the final three holes.

After birdieing the 17th, Rafferty hit a drive and an eight iron to set up a birdie on 18 and he then birdied the first, his last, to finish on six under and take the tournament by one shot.

It was his second victory in the competition having won it previously 2013 and he was delighted with the way he played and finished the final round.

“It’s always nice to finish strong and to do it twice in a week is great. Winning the Laytown & Bettystown Scratch Cup in 2013 was a big breakthrough moment for me and it means a lot to have won it again,” said Rafferty

“To win in Laytown is a nice boost heading to St Andrews. I played there last year in the St Andrew’s Cup and made the cut so I’m hoping that experience will stand me to this week.”