There is a three-way tie at the top of the Bridgestone Boys International Order of Merit following Ireland’s season opening matches against France and Wales.

Maguire, Walsh and O’Neill each earned 25 points in the order of merit table for their efforts. Charlie Denvir from Elm Park is fourth in the table with 20 points having won both of his singles matches in France.

Overall it was a mixed week for the Irish boys. The trip to France yielded an impressive 11-9 success at Terre Blanche. Ireland led 3-1 after the foursomes in France but the hosts edged the first singles session 4.5-3.5 and trailed by one point at the end of day one. Ireland reversed that score-line in the second singles session on day two to secure victory.

Wales captured the Cardigan Cup on home soil, winning 12.5-7.5 thanks to a dominant display in the two singles sessions.

In total, there are nine counting events in the race for the Bridgestone Boys International Order of Merit. The next two tournaments in the series are the Peter McEvoy Trophy (11-12 April) and the Fairhaven Trophy (18-21 April). 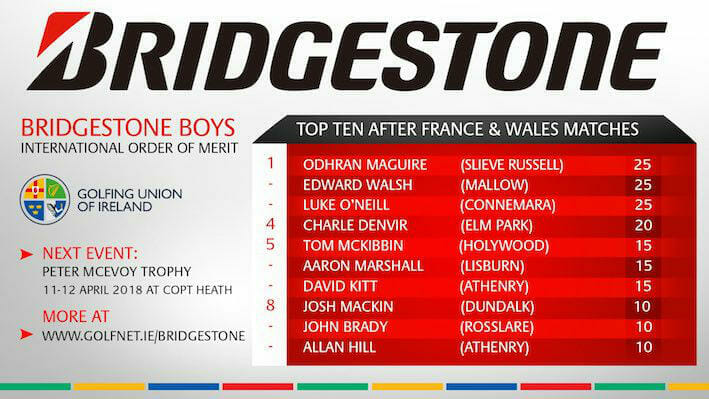