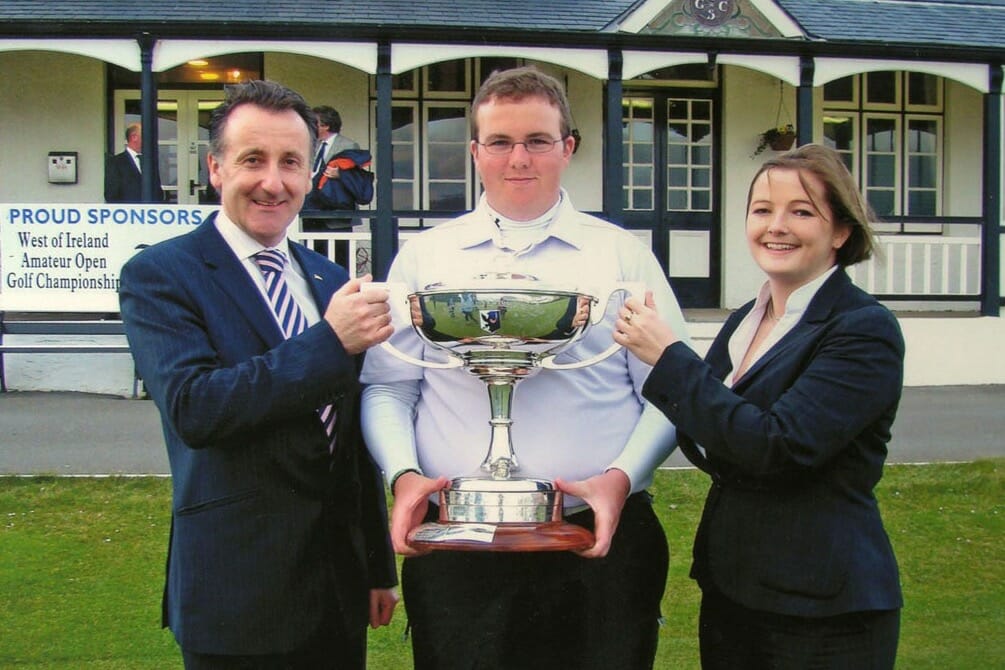 Shane Lowry, West of Ireland amateur championship at County Sligo, March 27, 2008. The Clara golfer takes the title courtesy of a 2&1 victory over Dessie Morgan of Mullingar GC in the final, a week before his 21st birthday on April 2 that year.

Relief is his dominant emotion. A winner of the 2007 Irish Close championship, Lowry had lost in the final of the ’07 North of Ireland and the ’08 West decider was his first chance to claim another amateur ‘major’ since then.

“It was important for me to win. I was beaten in the final of the North last year, and if I got beaten again today, you’d start to doubt yourself,” he says afterwards.

In retrospect, that West win a decade ago was something of a turning point in Lowry’s career.

His emerging talent was noteworthy but a couple of bizarre incidents in 2006 and 2007 had earned him headlines for the wrong reasons.

Rosses Point was the venue for his first senior amateur championship in the ’06 West when he was only 18. Lowry shot 66 in the second round of stroke play qualifying and would have won the leading qualifier accolade had he noticed that his marker had transposed scores on two holes. The total was correct, but DQ followed because Lowry had signed his card before discovering the error.

Worse was to follow a month later at the Irish Amateur Open in Portmarnock when he forgot to sign his card in round three after shooting 74 in a gale, the joint-best score of the day.

And just to round it off, he left his clubs beside his car after the final round of the East of Ireland championship in 2007, only to discover when he got home they had been stolen.

The golfer left Baltray assuming the clubs had been safely stored in the boot of his car by his caddie. Instead, they had been nicked by some opportunist thief.

All in all then, that 2008 West victory was important because it heralded the real beginning of a career that took off spectacularly with his Irish Open win on the European Tour as an amateur in May 2009, followed by his turning professional soon afterwards.

Ten years later, the forthcoming Easter period also finds Lowry at a point where he needs something to ignite the next phase of his season, and arguably his career.

The move to the USA in January has yielded little joy so far.

At 77th in the World rankings right now, he is only guaranteed a place in one Major championship, the Open at Carnoustie.

Lowry’s history, however, suggests that he is not all that far from a turning point.

After all, those stutters and mishaps in 2006 and ’07 were followed by some spectacular performances and a fine career to date in an ultra-competitive environment.

Lowry has earned around €12 million, won a WGC championship and two European Tour events, and came very close in 2016 to winning the US Open.

He may be somewhat stalled and frustrated right now but Lowry’s history suggests that these relatively barren periods are a prelude to a revival.

Watch this space, and don’t rule Shane out of a Ryder Cup place.