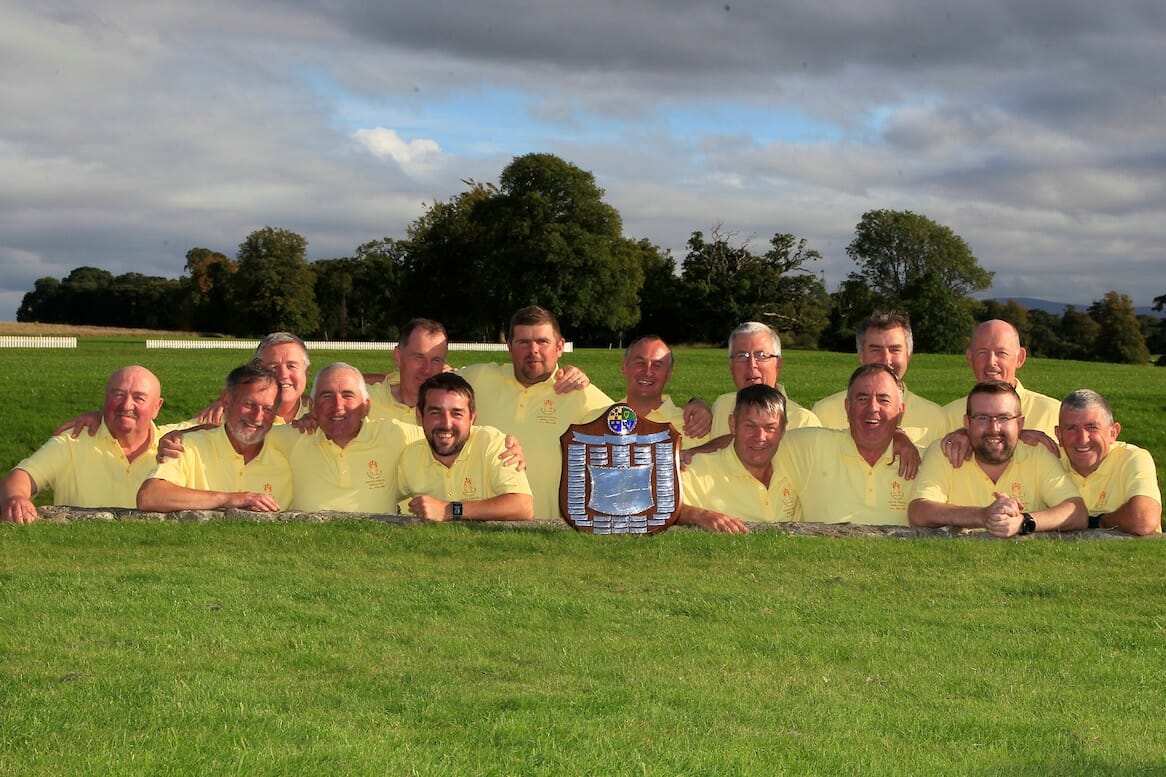 It may be a long way to Tipperary but Thurles won’t mind the spin home after claiming All-Ireland glory for the second time in three years in the Pierce Purcell Shield at Carton House.

Stephen Quigley and Martin Fahy delivered the winning point for the Stone Throwers having come through a nail-biting encounter with Royal Curragh. All square playing the last, Quigley and Fahy combined to seal a slender win that secured a third All-Ireland crown for the club.

“I’m still not right,” said Thurles team captain Jimmy Ryan. “My heart is thumping at 100 to the gallon at the moment.”

Ryan’s reaction captured the mood. Even if Thurles have been down this road before, winning in 1997 and 2015, nothing prepares you for the tension that unfolds when the title is on the line.

“We were dead and buried for a long time but these boys, their battling qualities are something else,” said Ryan. His anchor pair were two down through 13 and with two points on the board for each side, Thurles simply had to turn it around.

Father and son duo, Tommy and Shane Quigley, had taken the top match 4&3 for Thurles but John Looby and Gerard Maguire were taken all the way and scraped home with one hole to spare. Royal Curragh, beaten in the GUI All-Ireland Four-Ball Final last Sunday, were not about to give up on their All-Ireland dream.

Eddie Trant and Jimmy Murphy combined for a 2&1 win while Anthony Ryan and Thomas Powell took the penultimate match by two holes. Now Royal Curragh needed Brenny Murphy and Paul Dempsey to come through in the anchor leg. Thurles had other ideas.

“A brilliant pitch from Martin Fahy sealed the deal for us,” team captain Ryan explained. Fahy played a neat shot over the greenside bunker at 18 while their opponents three-putted. Those short game skills have been honed all season in Thurles Golf Club.

“The secret of all this is practice,” said Ryan. “The hours they put in this year was unbelievable. I was with them all the time. Every other Wednesday evening we were out there, rain, hail or snow. That’s where it all began. That’s how these boys are so good. They’re chipping and putting all the time. That’s their forte and they proved it today.”

As Thurles prepare to host the AIG Cups and Shields Finals in 2018, this success tasted particularly sweet. Remarkably Tommy Quigley, who played in 1997 when Thurles won their first title, collected his third gold medal.

“There is nothing as good as this,” said 59-year-old Quigley. “This is what it’s all about.”