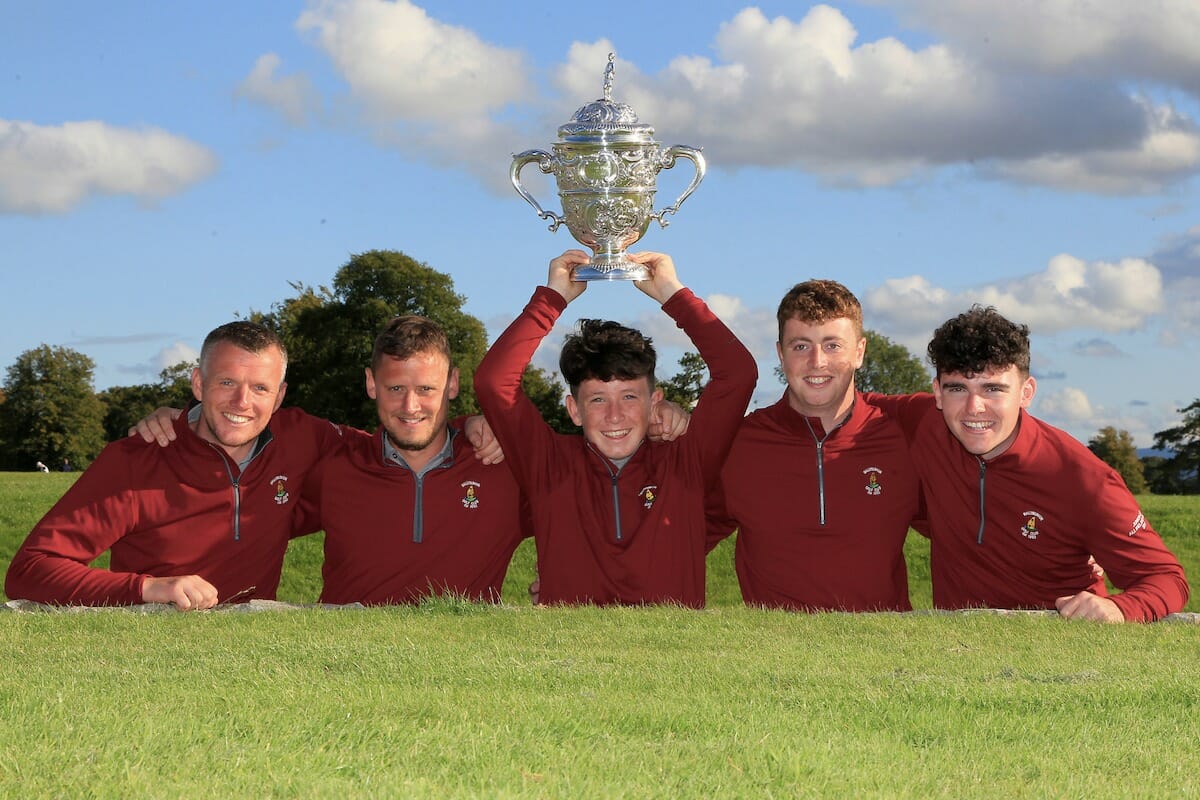 Ballybunion have beaten Grange to claim the AIG Junior Cup for the second time in five years, and in some style too.

Brian Slattery sealed the decisive point by overcoming Jack Ward in the crucial anchor leg after both sides sat on two points apiece. With big wins for Kevin O’Meara (6&5) and Graham McDonnell (7&5), Grange looked on course to win their first AIG Junior Cup since 1946 before the tide turned against them in a dramatic finale.

Frank Geary, sole survivor from Ballybunion’s 2013 AIG Junior Cup triumph at Royal Tara, got the comeback underway with a 3&2 win, and a second point came their way when Adrian Walsh matched Geary’s winning margin. That left the contest tied and so Brian Slattery and Jack Ward were pitted against each other in the crunch clash.

The signs were not promising for Slattery when he fell three behind after eight holes. Unperturbed, he won the 9th to take some momentum into the back nine. He clawed back the deficit again at the 10th and then won 13 and 14 to turn the match in his favour.

At 16, he went two clear when Ward found the water. With victory in sight, 17 staged a dramatic denouement. Both players missed the fairway and after a three-minute search, Slattery found his ball sitting deep within the rough.

“I hit his caddy car, his, not mine thankfully,” said Slattery. “I’ve had a lot of practice hitting out of heavy rough in Ballybunion, so I got it out.”

Those travails meant that Slattery faced a par putt from 100 feet. His opponent had chipped to within five feet and looked odds on to keep the match alive.
“Get it close,” was Slattery’s thought standing over the putt. “I knew he was nearly in gimme range.”

From there, the scene played out like the reel from a Hollywood movie.
“About five or six feet out I thought it was in. The boys behind were roaring that it was in the hole,” said the match winner, describing the moment his miracle putt hit the hole.

For Slattery, who turns 38 next week, it was an early birthday present.
“It’s fantastic,” said the Limerick native. “I know I was down early but I got a bit lucky, a couple of putts went in and Jack (Ward) had a couple of unlucky lip outs. I suppose it is just the nature of things, when they are going your way, they’re going your way.”

And for the second time in the club’s history, the AIG Junior Cup went Ballybunion’s way.