Maria Dunne steps out of the international golf arena

After a stellar career on the international stage Maria Dunne has called time on her days representing her country and while she will still compete in the national competitions she can look back with pride on her achievements.

On returning home from Daytona Beach, Florida, as a Bethune-Cookman College Graduate, thoughts of Curtis Cup triumphs and International representation were far from the mind of Maria Dunne. The then 24 year old had just spent 5 years stateside and had been struck with an injury that put doubt on her ever competing again. “I had just graduated college and was already in a point of my life where I didn’t know what I was doing career wise so it was difficult to deal with two and a half years of back injuries after I had gotten to a point where I thought I could play for Ireland on a regular basis.”

It was a family affair for Dunne in her early golfing days as Dad, Damien, would take her and her sisters to the driving range in Lusk or to the pitch & putt course beside their house in Skerries. “From about 8 or 9 I was hitting balls on the range and I joined Skerries Golf Club at 11, they have been a massive support to me over the years since. I wasn’t particularly talented but I just loved it and loved playing all sports. I continued playing football and GAA but maybe knew there was something special about golf that I loved. There was very few girls in Skerries but there were a couple my age who, although they don’t play anymore, I am still quite pally with. We played the Smurfit girls together and I would play with them and my sisters but I also played a lot with the boys – challenging them to chipping or putting competitions!”

If there was one deciding moment for Dunne that she wanted to represent Ireland one day it was a day trip to watch the 1998 Girls Home Internationals at Mullingar. “Our Junior Convenor at the time Mary Leonard took us to Mullingar for the day. It was watching those girls that I decided I really wanted to wear the green uniform one day! I had forgotten how much that trip meant to me and I called Mary recently after going back for the Irish Close to thank her, it definitely spurred me on.” Dunne didn’t have to wait long to get her first taste of representative golf, “about a year later I got a call that I was going to be representing Ireland at the European Young Masters in Italy alongside Heather Nolan, I was 15. That was such an amazing experience at the time. After that I started making Interprovincial teams and then played two girls Home Internationals, I was always looking to make the next step up.”

And make the next step up she did, at 21 years of age and at the Women’s Home Internationals at Cruden Bay in Scotland, Dunne made her first appearance on an Irish Women’s Team, a dream she had had since first competing in green as a 15 year old in Italy. Alongside team members such as Tara Delaney, Claire Coughlan and Tricia Mangan, Dunne assisted Ireland to an unbeaten week and a Home International title. Her golf career looked to be on the up, a European Team Championship spot in 2003 and two more Home International caps in ’05 and ’06 were followed by “the injury years”. “Some days it would be fine and others I would sit down and not be able to get back up again,” explained Dunne, “it was very unpredictable so that was difficult to deal with. I was trying to compete at the time and as you can imagine it wasn’t going very well, I was losing a lot of confidence. I worked through it with physios and consultants, but that took time. Once I had it under control it was a case of working on my fitness to make sure the injury didn’t return. My physical fitness has been a big part of my life since then.”

The Comeback:
When asked what she attributes her comeback and following success to the answer is clear; “Roger.” Roger Yates, her coach since 1998 has massively impacted her golf career. “We sat down in 2011 and he asked me did I want to be Maria Dunne – ex Irish International or did I want to play for Ireland one more time, I wanted to compete and play again, I didn’t think I was done! Once I was willing to put in the work, Roger was willing to work with me.”

At 26, some may have been content to live with their past success but even with dented confidence, Maria had more to give. From there it was a long road to continue working on her fitness but maybe more importantly, regaining that pre-injury self-belief. “I always had the work-ethic, but at the time Roger had more belief in me than I had in myself, I have a lot to thank him for.”

In 2012, Maria’s goal of playing for Ireland “one more time” came to fruition – she had earned her spot on the Home Internationals team, the bug had returned. “It was like when I was younger and was just trying to make the next step up, so from Homes in 2012 I thought maybe I could make the European Team Championships again, which I did the following year, then I thought maybe I could make the World Amateur Team, which I did the following year again, finally I then thought… ‘Oh, could I be a Curtis Cup player?’ From Roger’s belief in me I took out that anything is possible and I probably wouldn’t have made that Curtis Cup team without that.”

Finishing on a high:
Although she had already come to the decision that she was going to step back from International Golf at the end of this year, the win at Little Aston, fourteen years after her first Women’s Home Internationals, made it even more special, “it just confirmed that the time was right. I am making the decision for me and not anyone else, not many people get to choose to step away on their own terms so that’s special.”
Irish Captain Danielle McVeigh, a great friend of Maria’s, was a source of inspiration for the Skerries girl during her comeback. McVeigh spent some time as a Professional Golfer after a stellar amateur career and according to Maria “the sound of how she hits the ball is nothing I’ve ever heard!” Unfortunately due to personal reasons, McVeigh was unable to travel with the team to the Home Internationals. “I felt for Danielle not being able to come with us, she was one of the reasons that I wanted to stay playing this year – to play for her as she has been such a good friend to me.”

The week at Little Aston itself started on a positive note as, on meeting at the airport, Maria and Helen Jones, this year’s Irish Girls Team Manager, reminisced of the win in Cruden Bay – a win Jones was also a part of. “I just had a good feeling from the start of the week, even from after our first few minutes in the airport. The team were fantastic, we gelled really well and everyone was working for the same goal. Donal (Scott) is a great coach and Clodagh (Hopkins) stepped in in the absence of Danielle and really did such a great job all week. The youth of the team especially gives great hope for Ireland for the future.” 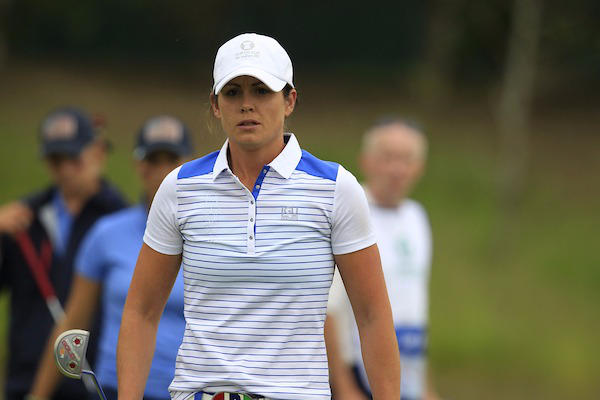 Career highlights:
While a Curtis Cup win with her Great Britain & Ireland (GB&I) Team and this year’s Home Internationals win for Ireland are an obvious choice, the Irish Women’s Open Stroke Play Championship at Baltray this year sticks out in Maria’s mind as being a special moment in her career; “Having a big personal victory I think alluded me for all the years of trying and competing, it was magic to get that win because I was really under pressure at that point, the season hadn’t started so well and I was questioning if I should have finished up at the end of 2016. My expectations of myself were much higher having made Curtis Cup last year. Not until I just let those thoughts go did I play some really good golf at the Stroke Play, get the win and kick start my 2017 season.”

That win at Co. Louth included a 9 under par opening round, “a good friend reminded me to ‘enjoy the walk’ before I teed off on Friday morning and I especially did that day. For the rest of the season that became my mantra and I enjoyed every walk in all remaining tournaments as I knew it was coming to an end soon.” This was her first individual win since the Leinster Women’s Championship in 2002 and lead to another GB&I cap at the Vagliano Trophy in Italy – again alongside Leona Maguire and Olivia Mehaffey with Annabel Wilson adding to the quartet of Irish representation on the team.

Giving Back:
Maria acknowledges that there have been a lot of people who have helped and guided her over the years. From long-time personal coach Roger Yates, the ILGU High Performance team, who she was able to contact at any time and the Skerries Golf Club members, to her husband, Bryan, who, she laughs, she might get to go on a honeymoon with after three years! Golf has also allowed Dunne to travel the world, from Japan to Peru, and has presented her with life-long friends whom she wouldn’t have met otherwise. In her own way, Maria is now able to give back to the game as a Golf4Girls4Life Ambassador and hopes to inspire the next generation; “To be a role model in any phase of your life is really special, I appreciate so much being asked to be an ambassador as I know how role models have inspired me over the years. I’m excited to attend some of the Golf4Girls4Life Festivals later this year and to be involved. What I think is great about the programme is that it doesn’t aim to find the next Leona (Maguire) or the most talented person in the group, it’s about giving the girls the opportunity to see what golf is and getting everyone to take part – that’s what matters”.

What’s next?
By her own accord, Maria will not disappear completely from competitive golf and aims to continue playing in the National Championships, however her days of playing internationally are in the past; “I will definitely continue to play weekly and try to win a medal or two in Skerries as well as play the home events. I’ll also have a lot more time on my hands now so you never know what is around the corner!”