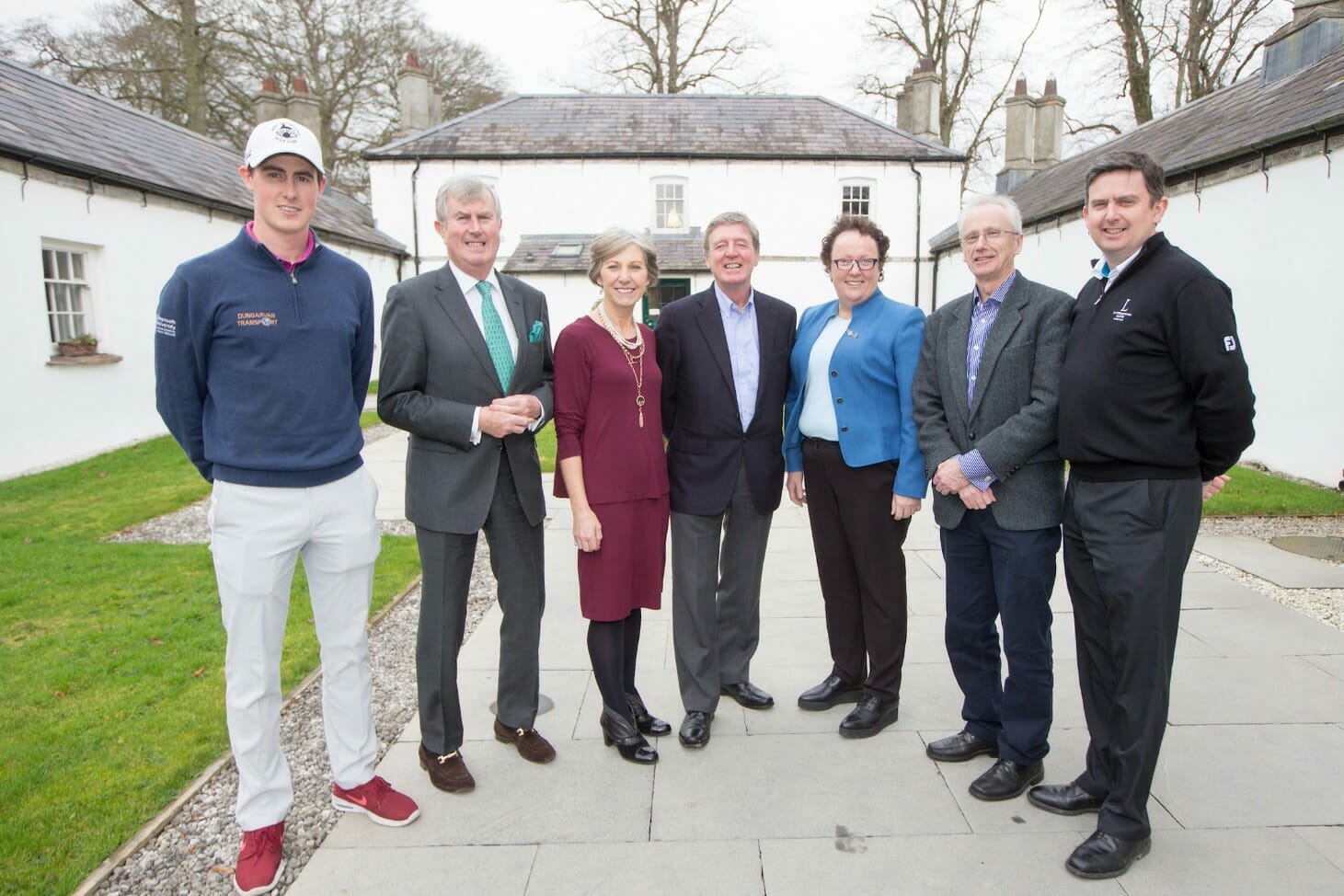 In a major boost for Irish golf, two-time Ryder Cup star Des Smyth has joined the Confederation of Golf in Ireland as Leader of Team Ireland Golf.

Smyth will oversee the development of Ireland’s fledgling professionals during their transition to the paid ranks. And in an exciting new departure, Smyth is spearheading a major fundraising drive at this year’s Team Ireland Golf Pro-Am, which takes place at Luttellstown Castle on Monday, 10 July – the day after this year’s Dubai Duty Free Irish Open at Portstewart.

“I feel now the time is probably right for me to be giving something back to the game that gave me so much,” said Des Smyth, speaking about his new role.

“I think it’s incumbent on us to make sure we have enough finance in place to support players coming through from the amateur to the professional ranks. There is a grey area for a few years where guys and girls need support if they’re going to try and break through and make it on tour because it’s a very tough place,” said Smyth, whose fundraising efforts will begin immediately as he gets to work on the planned Pro-Am at Luttellstown Castle in July.

“I’m happy to say that I’ve spoken with Paul McGinley on this and he’s 100 per cent behind it. He’s assured me that he’ll be there on the day,” Smyth confirmed. “We’re aiming for the day after this year’s Irish Open and we’re looking at between 20 and 24 teams. We’re going to try and make it a high-profile event with as many players as possible present who have been beneficiaries of Team Ireland Golf.”
Smyth added: “Professional golf, like all golf in Ireland, has added fantastic value to the sporting life of this island. We’ve had many wonderful ambassadors and if we want this to continue, we have to get on board and support this.”

During his amateur career, Smyth won the West of Ireland Open Championship in 1973 and played 16 times for Ireland at international level. He turned professional in 1974 and spent his early years playing tournaments as far away as Kenya, Nigeria and Zambia.

“I came from a different era when there was practically no support,” Smyth recalled. “I’ve made many mistakes and it’s cost me along the way so I’d be happy to pass on my experiences so as the players can avoid these things. I understand the mind of a professional golfer, they really have to be focused on what they’re doing. You have to have good advice and good people around you so that you can get on with your job. That’s why it’s important we get the finances in place. It’s no guarantee of success but it’s about giving these players a leg up and getting them on their way.”

Team Ireland Golf which provides financial and coaching support for emerging Irish talent on professional tours across the globe, is funded by Sport Ireland and administered by the CGI. To date, 92 golfers have been supported by Team Ireland Golf including former Irish Open Champion Shane Lowry.

Lowry, still an amateur at the time, famously won the Irish Open at Co Louth in 2009. Upon joining the professional ranks later that year, he received a development grant of €20,000 and has since won twice as a professional, most notably at the WGC Bridgestone Invitational in 2015.

Olympians Stephanie Meadow and Seamus Power are among the most recent beneficiaries of Team Ireland Golf. Meadow, who finished third on her debut at the US Women’s Open in 2014, and Power, who is currently playing on the PGA Tour having won his tour card last season, represented Ireland at the 2016 Olympic Games in Rio.

European Tour winners Peter Lawrie, Damien McGrane and Michael Hoey have been supported by Team Ireland Golf in the past.

As well as establishing the Team Ireland Golf Pro-Am, Des Smyth will now serve as a mentor for emerging and future professionals. Revered and respected across the world during a career spanning five decades, Smyth won eight times on the European Tour and famously captured the Alfred Dunhill Cup playing for Ireland alongside Ronan Rafferty and Eamonn Darcy in 1988 at St Andrews.

Redmond O’Donoghue, Chairman of the Board of the Confederation of Golf in Ireland said: “To have someone of the calibre of Des Smyth working with Team Ireland Golf is a huge boost for everyone associated with the scheme. As Des is well aware, establishing yourself as a professional golfer is extremely difficult. It can be a costly and lonely experience. We, at the CGI, do everything we can to make this transition as seamless and as painless as possible. The objective of Team Ireland is to support golfers who have the potential to become established players on the main international tours, such as the European Tour, US PGA Tour, Ladies European Tour and LPGA Tour. The success of professional golfers on international tours also helps to promote Ireland as a golf tourism destination.”

John Treacy, CEO of Sport Ireland commented: “Sport Ireland welcomes the appointment of Des Smyth as the new Leader for Team Ireland Golf. Des has immense experience in the professional game and will be a great source of inspiration and advice for Ireland’s emerging golfers. It is vitally important that we continue to support our individual golfers to ensure that the game remains healthy and that Ireland has a strong representation in professional tournaments around the world. The investment by Sport Ireland in the Team Ireland Golf Scheme is essential to assist our top golfers to make the transition from elite amateur to the professional ranks.”

Speaking about the Pro-Am at Luttellstown Castle, Peter Lawrie, recently appointed as Director of Golf at the venue, said: “I know only too well the importance of having a good team behind you. Team Ireland Golf provides vital financial assistance and practical support for young men and women who choose to embark on a career as a professional tour player and we are delighted to be hosting the Team Ireland Golf Pro-Am”