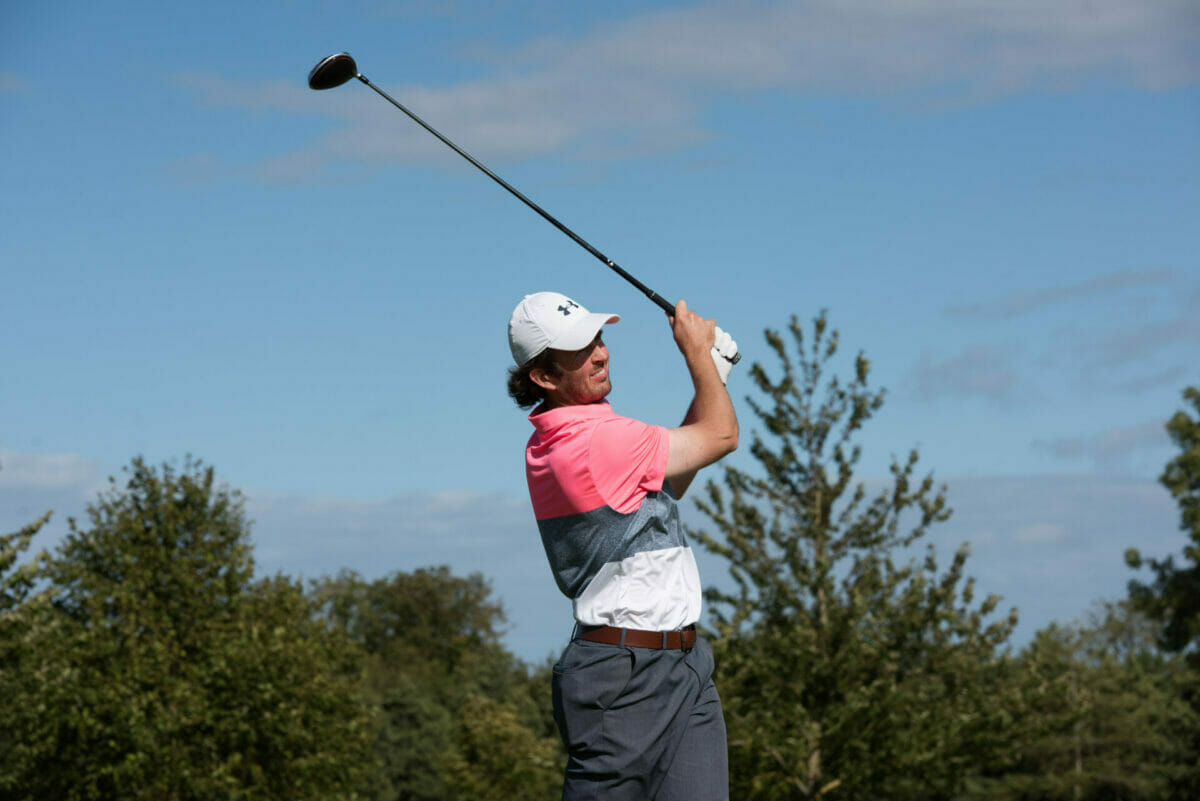 On a dramatic day in Newlands Golf Club it was three of the best as Michael McGeady, Sean O’Donoghue and Richard Kilpatrick were locked together at the top of the leaderboard at the Ballymore Newlands Pro-Am.

The Dublin club hosted a full PGA pro-am for the first time since 1997 and it’s safe to say they served up a classic.

Derry’s McGeady looked for a long time like he was going to come out on top after a birdie on the 18th saw him ascend to the summit.

A flawless front nine saw him take the early lead after birdies on the second, third, eighth and ninth helped him to the turn in 31. He stalled slightly with a dropped shot on 14 but responded in style at the finish.

Tullow’s O’Donoghue also birdied 18 for a 67 after dropping a shot on the 17th. He had moved to –4 after a birdie on 13 following a front nine of 32 that brought birdies on the second, third and seventh holes.

Banbridge’s Kilpatrick secured his fourth win of the season and the second gong he has shared after he also finished bogey, birdie to grab a share of the spoils.

Like his counterparts he also registered birdies on the second and third in another bogey-free front nine of 33. Birdies also followed on 11 and 13.

“First time I’ve ever played here,” said Kilpatrick after his round. “I find it very similar to Elm Park, always in great condition, not overly long but tight and tricky and it tests all aspects of your game, got to drive it straight and putt well and have a good short game.

“I didn’t take on any shots I didn’t need to, didn’t take on any corners and was never in any trouble, it was stress free golf, five birdies one bogey. I held a few putts and there wasn’t an element of my game that stood out or anything that was really poor it was just a solid day.”

Kilpatrick described his round as ‘stress free’ and feels that has been the key to his excellent form this season which has seen him scoop titles at the Philip Walton, Carlow and Bunclody pro-ams and he is primed to contend at the PGA Championship in Carne.

“If you can play 18 holes of stress free golf you will generally have a good score and that has stuck with me this year. Generally I have been very aggressive and that has cost me this year so I have tried to be a wee bit more conservative and it seems to be working.”

With The Irish PGA Championships only weeks away Kilpatrick is relishing taking his current form out west to Carne for another tilt at that title.

“Can’t wait, looking forward to getting over there (Carne) for the PGA, finished third last year, I like the golf course. Hopefully get good weather and see what happens.”

Former Newlands professional Peter Lawrie who was involved in hosting the pro-am finished on four-over after a 75 that included a quadruple bogey 8 on the 11th while The Island’s Jenkinson will rue an early triple bogey on the 5th which ultimately put paid to his chances despite a gallant fightback.

After a twenty-five-year hiatus Newlands finally welcomed PGA Professionals from around the country and Newlands professional Brian Cosgrove was delighted with how the day unfolded and hopes this is the start of a bright future for the event with hopes it can become a regular staple of the regional calendar.

“It was very successful, very happy with it. This is the first official PGA in Ireland one, 52 teams, sold out very quickly so very happy with it, a huge success a great day. The members really got behind it. Hopefully next year is on the cards it’s looking good already there was a great buzz the whole day.”

To resurrect a Pro-Ams like this after so long off the PGA calendar is a huge team effort and requires great financial support too. That support came from Ballymore as they were headline sponsors of the day.

“I bought a Ballymore house myself” added Cosgrove “they are good people, work hard and are a very professional company, they have been great sponsors to have on board and hopefully we can make this event bigger and better in the next few years.”

The team prize went the way of Peter Morgan of Elm Park Golf Club and his compatriots Charlie Conlon, Damien Dillon and Aleen Shine with a terrific score of 99 points.