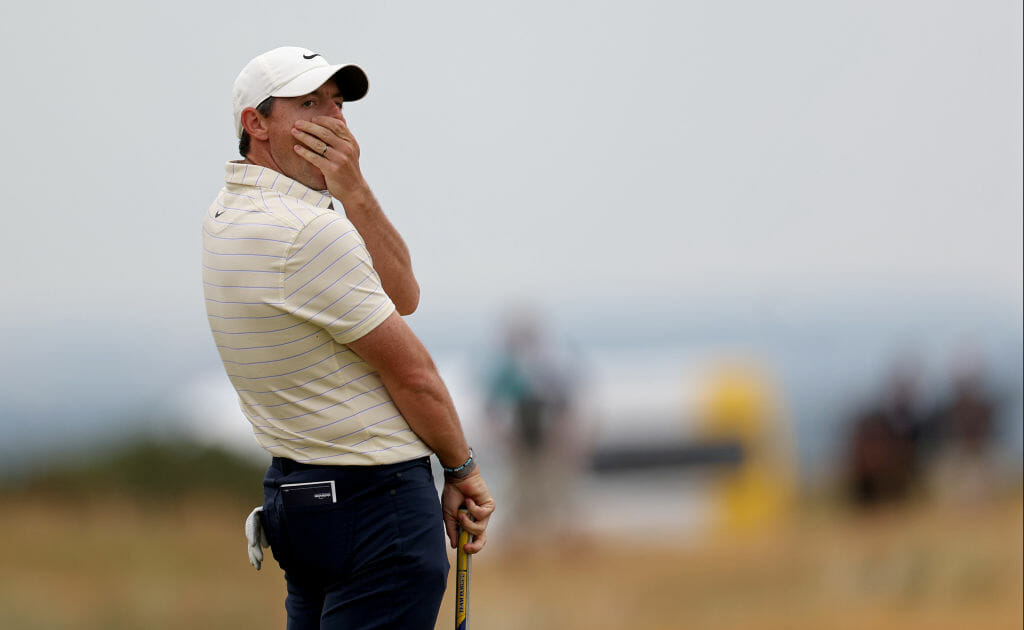 Rory McIlroy was left to rue a cold putter on the final day of the Open Championship but he insists he will break down the major door again after what he described as his best major performance since winning the PGA Championship in 2014.

“Yeah, it’s up there. I don’t know. I go back to the couple U.S. Opens in the last couple years, I feel like I played really well and gave myself good chances. I was tied for the lead with nine holes to go at Torrey Pines. I got myself in with a great chance at the PGA and the U.S. Open this year.

“Augusta is going to end up being my best finish of the four, but I never really felt like I was in contention there.”

All the pre-round hype was about could Rory get over the line and arrest an eight-year major championship drought that has defined his career in that period and the scrutiny will only increase after his latest near miss.

Teeing off with a four-shot lead alongside Viktor Hovland on a very vulnerable St Andrews the narrative seemed that he and the Norwegian would go toe to toe in a shootout or both bring eachother down, allowing one of the chasing pack to steal a march.

It was the latter as McIlroy saw a three-shot lead evaporate by a simply awesome Cameron Smith who went on an unassailable five birdie charge on the back nine.

McIlroy was two-under for the day after birdies on the 5th and 10th but when the gauntlet was laid down to him, he couldn’t respond on the greens and he was forced to settle for a two-under 70 and an eighteen-under total that remarkably gave him third place, two shy of Smith.

Left was the trend with the putter for McIlroy who will have to wait until the Masters next April to add to his four major titles.

“I wish I’d have holed a couple more putts. I missed an opportunity on 3. I guess I had sort of half looks on 6 and 9. The putter just went a little cold today compared to the last three days.

“It’s hard, like, there’s a lot of putts today where I couldn’t just trust myself to start it inside the hole. I was always starting it on the edge or just outside thinking it was going to move. More times than not, they just sort of stayed there.”

The 2022 major season has been an encouraging one for the Holywood native despite coming away empty-handed. He has made good starts in the championships without really putting four rounds together and while he held a share of the lead after 54 holes for the first time since his last major triumph, a final round of 70 will undoubtedly sting.

Rory has posted top-5 finishes in all of the majors this term but a second Claret Jug definitely slipped through the fingers. Missing out on an opportunity to return to the top of the world rankings for the first time since 2020 will be lost in translation but it does seem a case of when rather than if the world number two will lift another major gong in the future, even if he lacked the killer instinct on an Old Course that was there to be demolished on Sunday.

“Augusta is going to end up being my best finish of the four, but I never really felt like I was in contention there.

“I’ve been close and I keep knocking on the door. I can’t get too down on myself because the game is there. It’s just a matter of staying patient.”