McIlroy hoping his dreams can come through at St Andrews 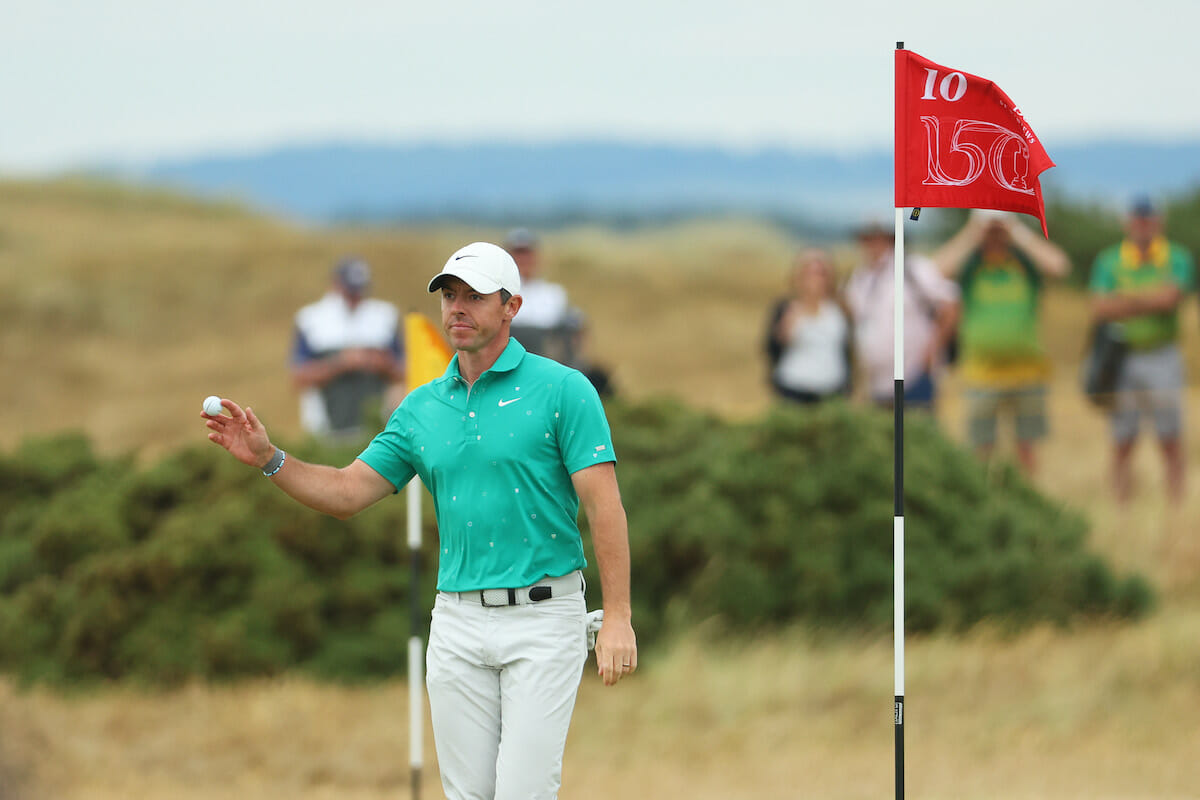 Rory McIlroy of Northern Ireland reacts on the 10th hole during Day Three of The 150th Open at St Andrews Old Course on July 16, 2022 in St Andrews, Scotland. (Photo by Andrew Redington/Getty Images)

If ever a Saturday felt like a Sunday, it was this one as Rory McIlroy and Viktor Hovland shook hands on the 54th green, looked each other in the eye and nodded that they would go again tomorrow after they ended round three tied at the top of the leaderboard at the 150th Open Championship.

McIlroy who missed a chance at a jaunt at the Claret Jug when the Old Course last hosted the Open has a great chance at arresting a major championship drought that has spanned eight years since the 2014 PGA Championship which is the last time he held a 54-hole lead.

Despite the drought McIlroy insists he will continue to “stick to the process” as he looks to get a fifth major title under his belt.

“Because it makes me play better [being in a bubble]. But it really does. Going all the way back to Augusta in 2011, I got out of my process. I got out of what I did for three days and it was a tough lesson. It was a really tough pill to swallow.

“The golf that I’ve played within the cocoon the last year has been a bit better.”

On a day where Cameron Smith held a two-shot lead at the halfway stage, round three soon turned into a ding dong battle on the back nine between McIlroy and Hovland and it ended with both locked together on sixteen-under after a pair of 66s.

They are four shots clear of Cameron Young and Smith who shot rounds of 71 and 73 respectively.

McIlroy began the day three shots adrift of Smith and after Hovland stole a march on the field with four successive birdies on the front nine, he eventually leapfrogged his Ryder Cup teammate and took the lead for the first time this week with a birdie on 14, his 50th hole of the week.

The four-time major champion started slowly but burst into life as he entered the St Andrews loop in form akin to Friday’s 68. A brace of birdies on 5 and 6 helped him keep tabs on Hovland at just two behind before the first key moment of the round went his way.

Both players drove the ball into the heart of the ninth green and while Hovland three-putted, McIlroy walked off with a birdie. Roars of encouragement for Rory after Hovland’s miss and his birdie were a sign of things to come.

It looked as if Hovland was still in control of things when he drove to the front of ten and Rory found the right bunker.

Just a couple of hours earlier, Shane Lowry had produced the moment of the day with back-to-back hole-out eagles on the ninth and tenth, but he was completely eclipsed by McIlroy who saw his bunker shot disappear for an eagle two.

The four-time major champion has made a habit of thrilling the galleries in major championships this season and he certainly played to the fans with his celebration.

“The support I have gotten this week has been absolutely incredible, I appreciate it and feel it out there but at the same time I am trying my hardest to stay in my own world.

“I try to acknowledge it as much as I can while staying in the process and my bubble.”

After the birdie on fourteen, things took another twist. Hovland found the road with his second shot on 14 but while Rory had grass under his ball he proved that perhaps the grass isn’t always greener after his second ricocheted off the adjacent wall leaving him with no option but to chip to the heart of the green and take his five while the Norwegian two-putted for a par to level affairs going down 18.

“I was saying to Harry, if I had the lie that Viktor had I could have tried to play a similar shot and go with the pin or even go left. But it was sort of on the edge of an old divot. And honestly like if I went left with it, I could have seen myself put it in the burn over there in the left. So I tried to pitch a — I had 127 to the front — I tried to pitch a wedge about 135. And it just came out really hot on me and obviously got up and over the green.

Hovland hit the best drive of the day into the 18th green as he pierced one down the right side of the fairway leaving him with a makeable eagle putt from above the hole. McIlroy’s ball trickled through the valley of sin and just held on to the green and both players walked off with tap-in birdies to send the fans home gushing with excitement and thoroughly satisfied after a thrilling day of entertainment.

“I thought it was really good. I missed some opportunities early,” said McIlroy. “Watching Viktor hole a couple of long ones early on. But stayed really patient. Got my first birdie of the day on 5. And I feel like my patience was rewarded around the turn with a couple of birdies and that hole-out on 10.

But overall, really good day. We sort of fed off each other, and navigated the last few holes well. It was sort of tricky coming in there.  So, yeah, overall, when you’re a couple off the lead going into the third day of The Open and you go out and shoot a 6-under you’re always going to be pleased with that.”

As for the support, McIlroy has allowed himself to soak up the atmosphere at times and take it all in.

“I think all week I’ve been trying to do that,” he said. “The galleries have been massive. The ovations coming on the greens, with the big grandstands. Walking up 18 and that whole scene and trying to look for my parents and Erica and Poppy in the windows of the Rusacks, because I know what rooms we’re staying in.

“I think it’s appreciating the moment as well and appreciating the fact that it’s unbelievably cool to have a chance to win The Open at St Andrews. It’s what dreams are made of. And I’m going to try to make a dream come true tomorrow.”

Elsewhere from an Irish point of view there was disappointment for both Lowry and David Carey who saw their slim hopes of winning come to an end.

Lowry had threatened to lift himself into the mix after he brought Saturday to life with back-to-back eagles on nine and ten.

The Clara native held out twice from off the green to move to nine-under and within four of the lead. However, dropped shots on 12, 15 and 17 saw him play his way out of contention as he settled for a 69 and seven-under.

“I played good, but I just didn’t putt good enough. It’s not good enough when you put in all those hours every day to give yourself those chances on the back nine of a major on a Saturday and Sunday and you don’t perform, you need to look at something.

“Look, I’m going to go away. I’m going to have to go to the putting green this afternoon and try to figure out something for tomorrow because it hasn’t been good enough all week. If I had holed anything all week I would still be out there playing. I’d be thereabouts with the leaders. Like I said, it just ain’t good enough.

“Pretty annoyed and pretty pissed off, to be honest.”

Darwin Escapes golfer, Carey teed off within eight of the lead but he slipped to a one-over 73 to lie back on four-under and a share of 35th.