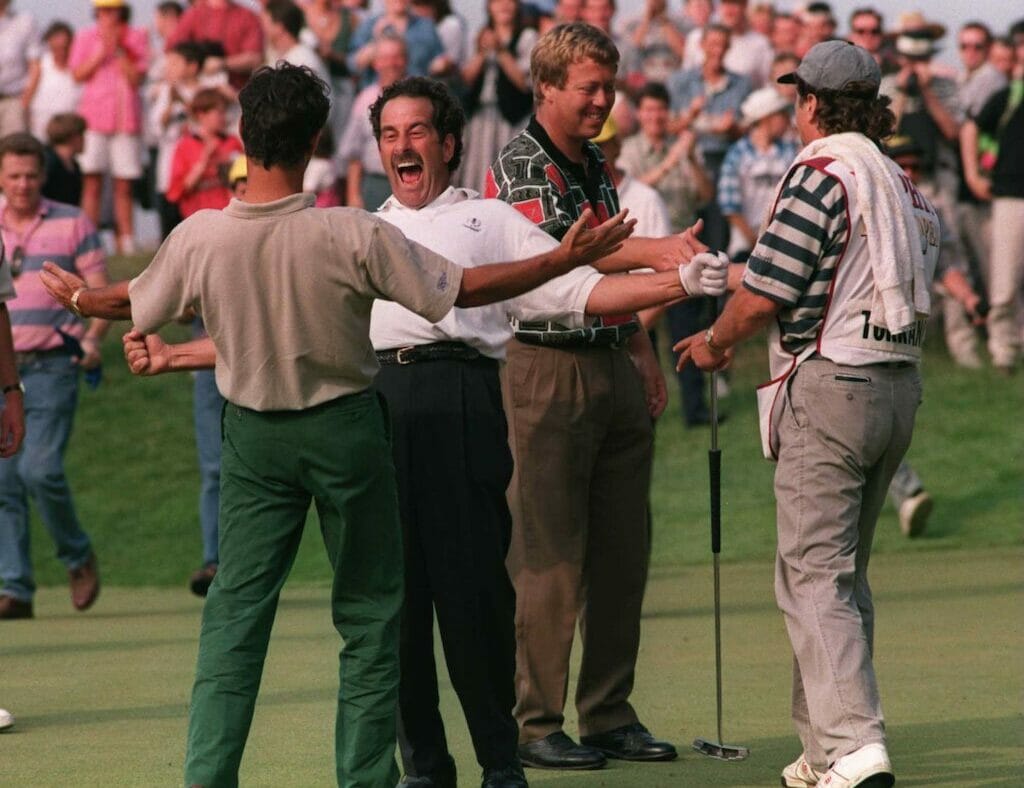 My attendance at the second and third hosting of the Irish Open as a member of the golfing media was clearly more memorable than my first.

I first attended the Irish Open in 1993 when it was staged at Mt. Juliet for the very first time. It was also the last to be sponsored by Carrolls.

Nick Faldo made it three Irish Open wins in a row having won back-to-back in 1991 and ’92 at Killarney, and therein lies part the reason in not treasuring the first in 1993, while apart from an incident in 1994, the 1995 edition and the following 23 or so were wonderful experiences at an Irish Open.

For 1994, Murphy’s was announced as the new Irish Open major sponsor and they sponsored the event up to and including 2002 when Dane Soren Hansen won in a play-off at Fota Island.

The fact that Murphy’s was on tap in the Mt. Juliet media centre to coincide with those nine years was a huge plus for a thirsty media contingent, and a good reason why my second Irish Open showing was a delight and besides, Murphy’s is a little sweeter to my liking, if I can use that expression, than its great rival Guinness.

Sticking with the Murphy’s theme I recall vividly the 1995 Murphy’s Irish Open, as Scot Sam Torrance won the event in a play-off.  He was handed the stunning Waterford Crystal trophy and, naturally in holding it aloft, he received a huge reception.

However, Torrance was then handed a pint of Murphy’s. The wily ole Scot proceeded to down the pint in one gulp, albeit spilling a small droplet on the front of his shirt. Then in holding aloft the empty Murphy’s glass, Torrance got triple the roar than moments earlier in raising the victory trophy. 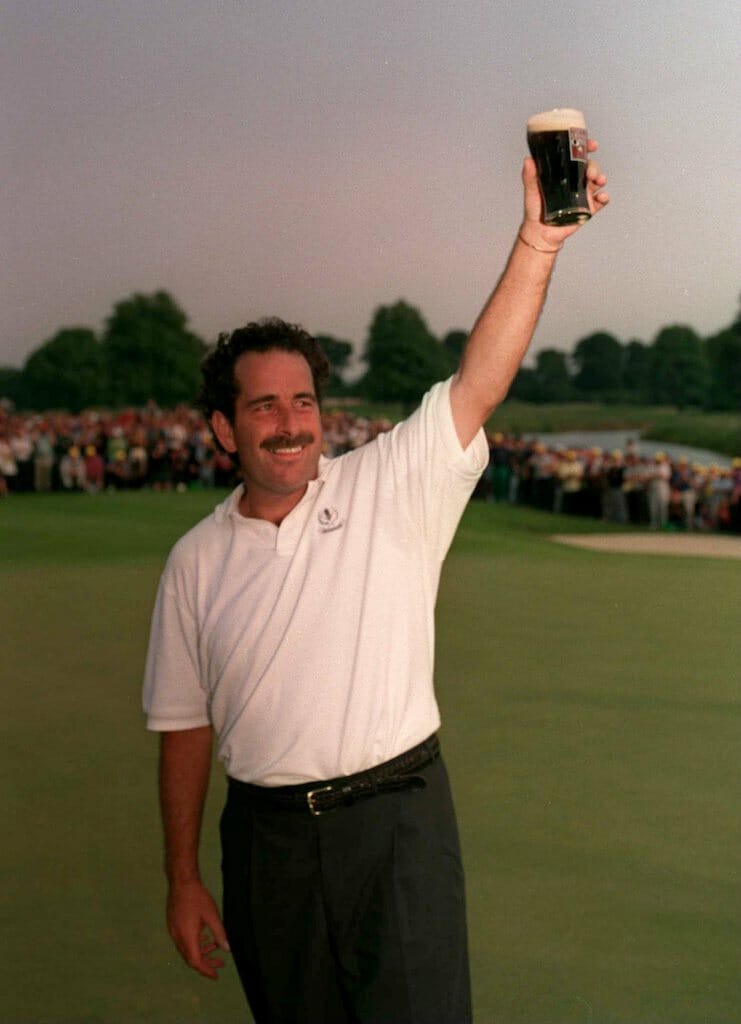 My second Irish Open appearance in 1994 had been spoiled by crashing the car I had borrowed, owned by a young Dublin woman I had met, and who had a small tattoo of a black cat just below the line of her belt. It was a tattoo I did not see very often, if you know where I am coming from. She was one tough cookie!

Anyway tattoos aside, the media parking was always via the back entrance at Mt. Juliet and it was a scary road very narrow and lined by these high, can’t see over, hedges that are so common on Irish and UK back roads.

Well, I took one corner too fast on this Sunday morning and in hitting the brakes of Mary’s vehicle slammed into a bus. The accident I later learnt caused huge chaos as it was the route being used by the official cars taking players to the course.

To cut a long story short, I was taken to the outpatients ward of the local hospital and did not get to return to the media centre till very late and just as fellow Aussie Robert Allenby had posted a closing round of 72 to let slip victory to Bernhard Langer.

Robert looked at this bandaged and bruised golf journalist and kind of remarked: “What the **** happened to you?”  Writing at the time for the Australian and New Zealand media, I responded: “Well? I was going to ask you the same question”.

The funny thing, in looking back, I was not missed by any of my media colleagues. No-one seemed to bother where I was until I turned up looking like I’d gone 10 rounds with Sonny Liston.

Suffice to say Mary also was not impressed that her car would not be returning to Dublin but I paid her the expenses to have the car repaired but that was my last chance of also getting a better look at the black cat tattoo.

The 1995 Irish Open was brilliant as I had befriended my still good friend Pierce Cullen, who resides at Thomastown and just a few miles from Mt. Juliet. Pierce owns Cullen Steel, and is still operating the business. He also loves his golf.  We played many games at Kilkenny GC, where Gary Murphy was a member.

On the Saturday morning of the 1995 Irish Open, Pierce and I were joined by Ian Baker-Finch who had asked to join us earlier in the week for a round at Kilkenny. Finchy was at the tournament commentating for TV. I’ve known Finchy since his days playing the Australasian Tour when we were both starting out on our respective golfing careers.

It’s funny, by the end of our round that Saturday morning, the club captain had come out to carry Finchy’s bag while we had a good few of the members following our group.

Pierce was great as he introduced me to many of his friends and, of course, we would go for a pint or two down to Parliament Street in Kilkenny.

I think there are six pubs in a row in Parliament Street and separated by just one shop. In all my times meeting Pierce and then being invited to stay with his wife, Rita and family during any visit to Mt. Juliet, I never once made it out of the first of those six pubs – that being Reidy’s.

The 1995 Irish Open was also memorable as Greg Norman teed-up. It was Norman’s first visit for some time to an Irish Open. He teed-up as the World No. 1 having won twice already that year on the PGA Tour. There was ‘Great White Shark’ signage all around Kilkenny and area, including one poster I remember of the fin of a shark cutting a path through a green to the flag,

I recall an incident where Norman’s piercing blue eyes were like a laser cutting through this heavily-freckled TV journalist, whose name I cannot remember, but Norman’s tone was in response to a question or remark he had asked. And if Norman got asked once: “Greg? What score do you think will win?” he responded just as many times: “The lowest!”.

Norman and Colin Montgomerie were, from memory, in the penultimate group or the final group in 1995 and late in the round Monty lost the plot with the crowd. Monty could hear and see things in the crowd five rows back. Norman was a picture of concentration and not at all bothered.

So, on this one hole Monty took a camera off a spectator and walked-up to a marshal to hand him the camera but saying: “No here marshal! Do your job”.

The Irish Open, and probably aside for the winner of my first in 1993, has always been extra special.  I’ve not only got to be present at some 25 Irish Opens but also tee-up on some many Irish courses, along with ‘being on the ground in Ireland’ in helping to my dear departed father source the McGuire heritage, as well.

Most importantly, I’ve made lifelong friends such Pierce, Rita along with so many Irish-born colleagues who I count as many of my dearest friends and colleagues.