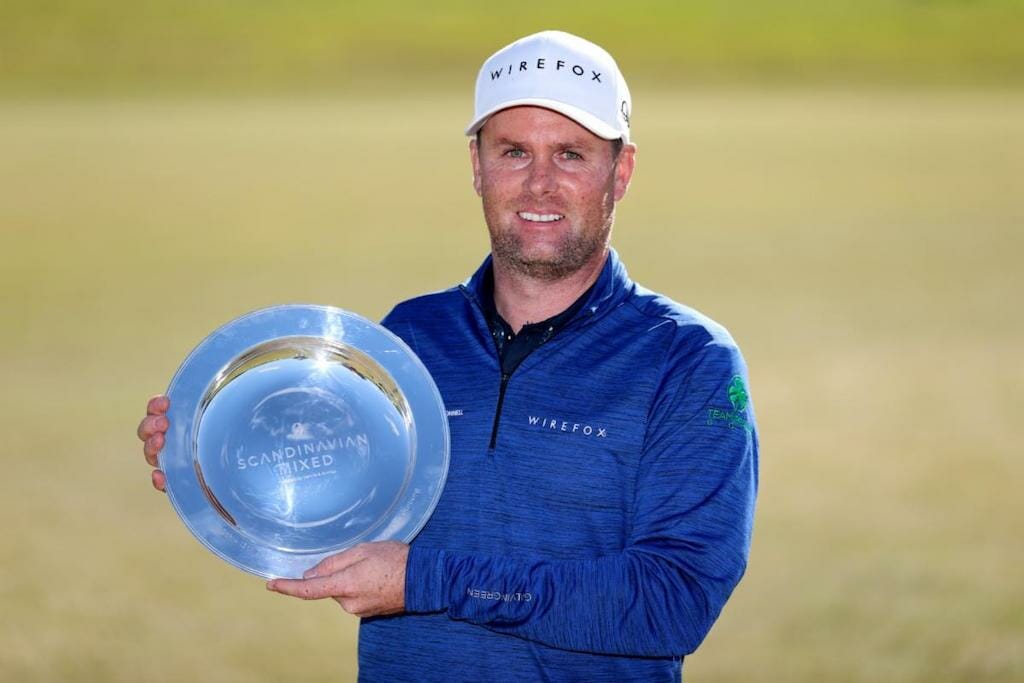 Defending champion Jonathan Caldwell would love to go toe-to-toe with a woman on the back nine on Sunday as he makes his first DP World Tour title defence at the Volvo Car Scandinavian Mixed.

The Northern Irishman carded a closing 64 almost 12 months ago to lift the trophy, finishing two shots ahead of Ladies European Tour player Alice Hewson, who finished in third.

The inaugural staging of the event – which sees 78 men and 78 women battle it out over the same course for one prize fund and one trophy – was a huge success in 2021 but had to be played without fans due to the Covid-19 pandemic. This season, spectators will be lining the fairways at Halmstad Golf Club but Caldwell is hopeful that a new venue can yield similar results.

“I have been thinking about last year a little bit, obviously we are at a different venue this year, a beautiful venue mind you, but it would have been lovely to go back to where I won last year but yeah, I have been thinking about it a little bit so I will try and get it out of my head on Thursday morning when I need to get back to playing golf,” said Caldwell, who has made just three cuts this season and has an afternoon tee time today.

“Obviously lots of satisfaction. It was a dream come true from being a small kid at home, to then win on Tour, to do it and feel that, not the relief but the excitement of winning and knowing that you can do it and compete was hugely satisfying.

“It gave me that belief that I could win. My form hasn’t been great since, I haven’t given myself too many chances to win, but knowing that I have done it under the pressure of having a chance and having been able to see it out gives me great belief.

“It is great to be able to play against the girls and the prize money is up this year, so I think the field has got stronger, and hopefully the course stands up for both men and women and they get the setup correct, and we can have a good battle with the ladies. We can compete together and hopefully it comes down to a man and a woman on Sunday fighting it out for the event.”

Meanwhile, Henrik Stenson and Annika Sörenstam are delighted to have the fans back as they host the second edition of the tournament on home soil.

Stenson is playing his second event on European soil since being appointed Ryder Cup Captain, having produced one of the moments of the week last time out in Germany as he made a spectacular eagle on his 36th hole to make the cut. And while he admits he is busy with Ryder Cup business, he is still very much focused on competing.

“It’s great to be back home playing in Sweden and the sun is out, hopefully big crowds,” said Stenson. “That would be the one big difference that we really missed last year at the first event, we couldn’t have crowds due to the pandemic, so really looking forward to playing in front of the Swedish crowds again.

“We are in for the long term with all the partners and everyone involved, we just try and make it better and better, and it was a success last year and we had a lot of fun, so excited to get going again for the second time.”

“I have been working a lot on the long game over the past six months and I feel like it has been trending in the spring, I haven’t really had any results to show of that, but it has been moving in the right direction.

“Maybe a little bit of a setback last week, it didn’t quite feel as good in Hamburg, but we keep on working away and patience and hard work normally pays off.”

Sörenstam herself knows what it is like to lead your continent, having been Captain at the 2017 Solheim Cup, and she was proud that the men can now also boast a Swedish leader.

“I’m super excited for Henrik and his family, he’s such a great ambassador for the game in a lot of ways and to be the first Swedish Captain is a great honour,” she said.

“He’s been a trailblazer for men’s golf so I think he’s going to do a great job. He’s a very likeable guy, and I think he will be prepared. I’m sure he’s got some good Vice Captains and a team around himself so I’m happy for him. It’s big step in his career so if he needs any tips or any advice or any pointers, he can always call me.

The 51-year-old teed it up professionally on home soil for the first time in 13 years at this event last season, going on to win the U.S. Senior Women’s Open just weeks later. That earned her a place in the field for last week’s U.S Women’s Open and she is happy to get the competitive juices flowing again.

“I’ve enjoyed the last year-and-a-half playing and practising so we’ll see. It’s great to be here. Obviously this is a tough competition, some of the best European players on the men’s and women’s side but I feel pretty good about my game. I just want to have a good time, play the best I can and be a good hostess, so we’ll see.”