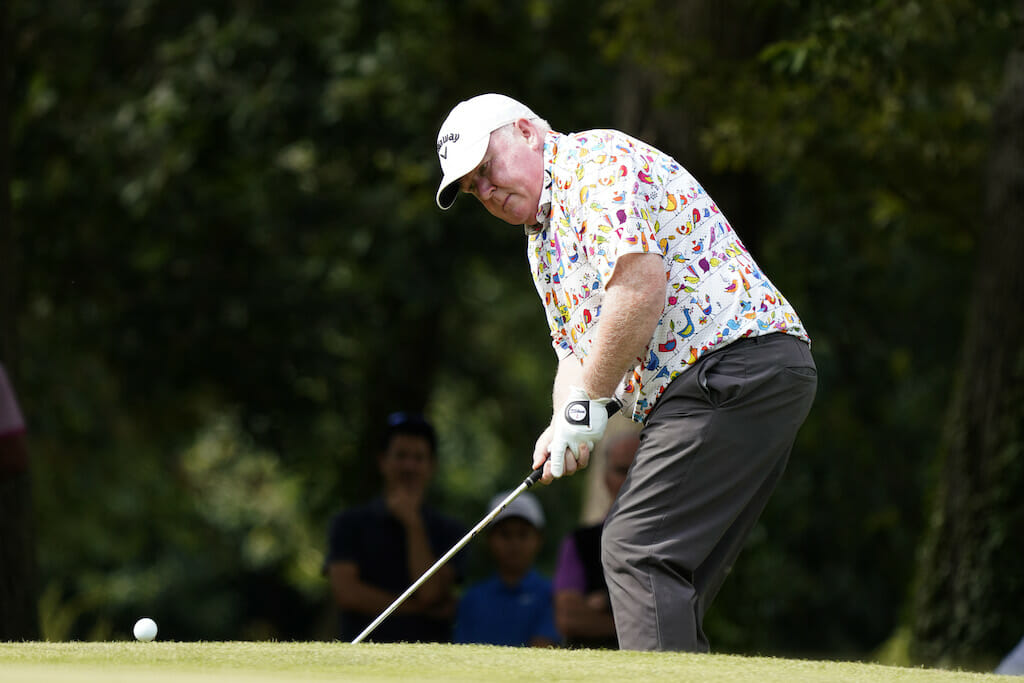 Former Ryder Cup star Peter Baker turned back the clock at Romford Golf Club in the second round of the Senior PGA Professional Championship and goes into final day buttressed by a three-shot lead over Ireland’s Brendan McGovern.

Reprising the form that has earned him victories on both the European and Legends Tours and a place in Europe’s 1993 Ryder Cup team, the head PGA pro at South Staffordshire Golf Club posted a five-under par score of 66.

That took him to six-under for the tournament and three shots clear of the chasing pack led by a trio comprising Headfort’s Brendan McGovern, Peter Scott and David Brunton.

That seemed an unlikely scenario, however, when Baker left the 15th hole having recorded the solitary bogey of his round.

It left him on four-under for the tournament and the top of the leader-board over-populated.

Round the M25 at West Essex Golf Club, Wraith Grant was laying the foundations to win this tournament for a second time.

Grant, who represents Horne Golf Centre, was on five-under after the 12th hole while Northenden Golf Club’s Brunton was on four-under midway through his round at Romford.

Both, however, lost momentum, Grant in spectacular fashion.

Baker, by contrast, responded with a birdie, par, birdie, finish and reflected: “I’m very pleased with the finish and the whole day really.

“I played a lot better today and made less mistakes, so I’m delighted. I had not played either course before and I was OK in places yesterday but there were lots of mistakes and I hung in there a bit.

“I’m looking forward to playing tomorrow, it’s going to be a challenging day. It’s a tough course with small greens so you’ve got to be on your game. It’s nice to be in with a chance and hopefully I can have another good day.”

Given some of the scores posted at West Essex, ‘tough’ is clearly an apposite description and a three-shot lead could prove fragile.

Barry Austin, the overnight leader on four-under after his round at Romford, is now four-over and Grant finished on one-under for the tournament.

It also proved a card-wrecker for defending champion Liam Bond on day one. He signed for a round of seven-over but hit back in style at Romford with a six-under par round of 65, the best in the tournament thus far.