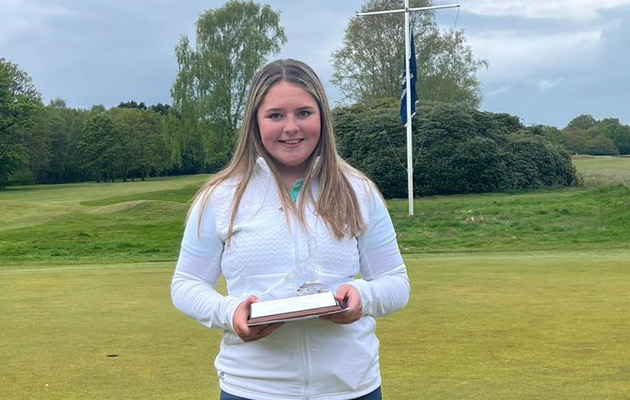 A back nine birdie blitz saw helped her to a final round 72 and a two-shot victory. The Knock golfer was the only player to finish under-par after rounds of 77, 77, 73 and 72 gave her a one-under total.

Poots played 36 holes on this Bank Holiday Sunday with an eagle-three on her opening hole setting up a morning effort of two-under 73 before she went one better in the afternoon.

Having turned in one-under 36 in the afternoon, Poots took the tournament by the scruff of the neck on the back nine with three birdies in five holes.

Katie pulled away from the field with birdies on the eleventh, twelfth and fifteenth and she could even afford a bogey-six on the 18th.

Clandeboye’s Rebecca Gardner saw her hopes disappear on Sunday morning with a six-over 81 but she recovered well with an afternoon effort of 73, her lowest of the week to secure third spot on seven-over.

England’s Isla McDonald-O’Brien shot a final round 73 to finish second on plus one but Poots managed to keep her at arms length.

Meanwhile in the men’s section, Roganstown starlet Sean Keeling secured a top-10 finish on level-par after rounds of three-over 75 and level-par 72 on Sunday.

His compatriot James Walsh finished two shots further back in twelfth on two-over after final rounds of 70 and 76.

Adam Buchanan fired Sunday rounds of 73 and 74 to remain in the top-20 on six-over while Noah Bickerstaff was eleven-over in 30th position.