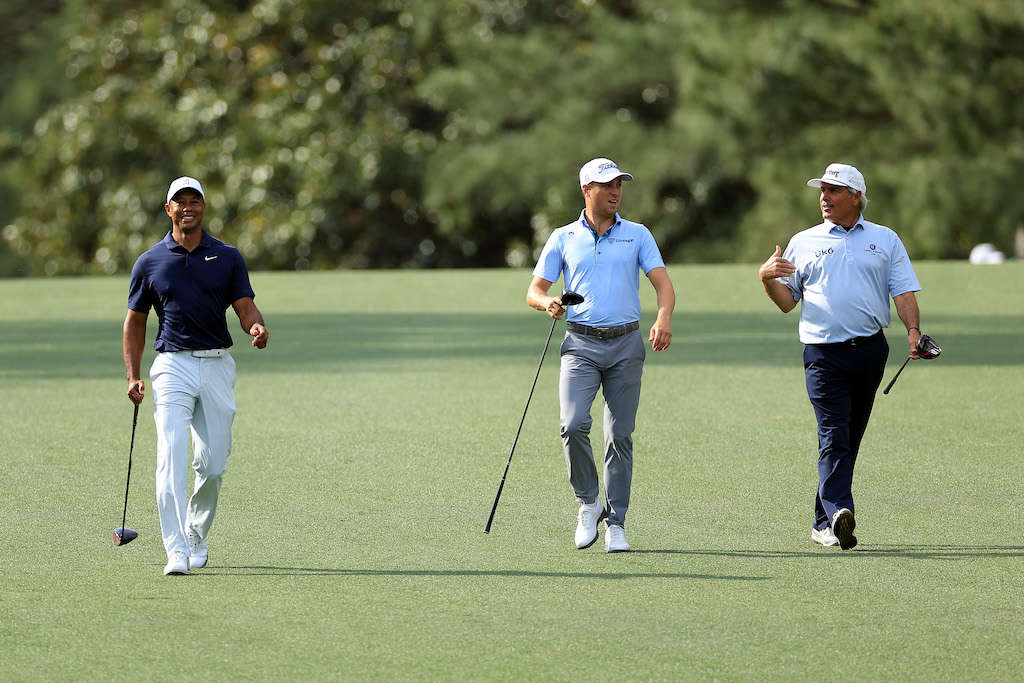 Woods, Couples, and Justin Thomas had just played a casual nine-hole Monday afternoon practice round at Augusta National, though you could have been mistaken, given the huge number of patrons that also walked the nine holes, that it was Sunday afternoon at the 86th Masters.

The out-pouring of patrons’ support is something that has not been seen on a Monday afternoon at Augusta for many years.

Couples, now aged 62, this week is celebrating the 30th anniversary of his 1992 Masters win, and alongside him caddying for Woods, was Joe LaCava, his winning caddy from Couples’ Augusta triumph who’s now calling the shots for Woods.

“If he can walk around here for 72 holes, he’ll contend,” Couples said when asked by reporters what he thought of Woods’ chances of competing this week.

“Tiger was bombing it. I know JT is not the longest hitter on the tour, but I know he’s damn long. Tiger was with him flushing it.

“I watched it today, and as I said, he looked phenomenal.”

This year marks the 25th anniversary of Woods’ maiden Masters and a first major championship victory, in 1997, in his first Masters as a professional.

Couples revealed, aside from the daily text messages from Woods about his son Charlie’s new clubs, and his daughter Sam’s soccer game and fabulous Golf Hall of Fame induction speech, how he learnt Woods would be taking his clubs to Augusta this week.

“I got this text from Tiger saying ‘I’m going to Augusta’,” said Couples.

That was late last week when Woods played a practice round with his son, Charlie, and Thomas, and played the back nine Sunday, catching up to a 27-year-old Aussie and Masters rookie Cameron Davis, who took the opportunity to pick Tiger’s brain about the course.

Davis thought Woods looked “pretty solid” but added that he was walking “a little slow going up a couple of hills on 17 and 18″.

Couples then got another text on Sunday night from Woods. “Dude,” read the text, “we’re playing 3 o’clock tomorrow. See you on the tee.” “You bet,” Couples responded.

It seemed like everyone who followed the trio on Monday afternoon must have been cced on Tiger’s text to Couples.