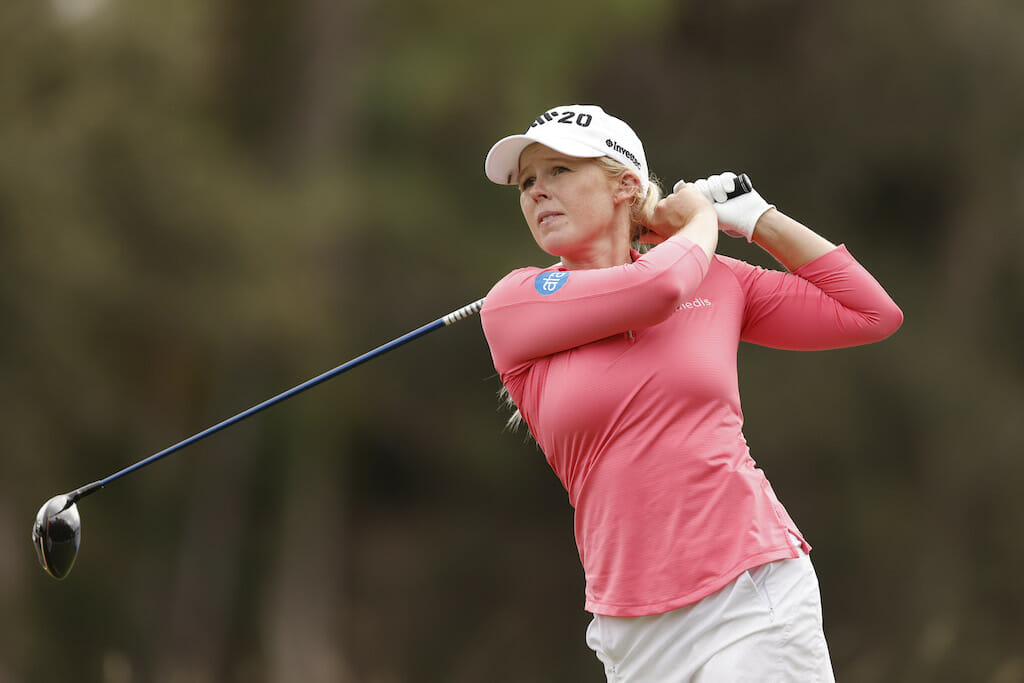 Stephanie Meadow and Leona Maguire had to content themselves with top-40 finishes as Jennifer Kupcho celebrated her maiden Major victory at the Chevron Championship at Mission Hills Country Club in Rancho Mirage, California.

Maguire finished her week with an under-par round as one-under 71 saw her move just inside the top-40 into a share of 39th at two-under-par, with Meadow a shot better off as a two-over 73 dropped her back to 35th at three-under-par.

That only tells a fraction of Meadow’s story, though, with the Jordanstown woman having been inside the top-10 at one point of the final day, only to collapse and slide rapidly down the leaderboard with five bogeys in her last eight holes.

While she was never challenging for the title, the 30-year-old had been riding a wave when birdies at the second, third and seventh had her out in 33 strokes and up to seven-under for the tournament, however things quickly unravelled after the turn as she bogeyed her first hole of the day at the 11th and that snowballed, with four more arriving alongside one more birdie as she slipped outside the top-30.

Maguire looked all set to join her at the same mark but she bogeyed the 18th to finish one shot worse off, four birdies and two more bogeys leading to a 73 and two-under-par for the week.

It’s not the ideal finish either player would want, but both players had solid weeks to start off their Major campaigns for the season and both will have a better idea what will be required of them moving forward on the LPGA Tour as a result.

Meanwhile, Kupcho rounded out a straightforward victory in Rancho Mirage, although she perhaps would have liked it a little more comfortable than what it finished.

The American started the day six shots in the lead and seized complete control with three birdies in her first five holes, although it turned out she would need those spare strokes coming down the stretch.

With Jessica Korda, sister of World No.2 Nelly, reaching the clubhouse at 12-under after a three-under 69 in her final round, Kupcho began to wobble slightly with three bogeys in the first five holes of her back nine, but a well-timed birdie on 15 was just what she needed.

With her four-shot lead renewed, Kupcho was able to bogey her final two holes and still enjoy the stroll down the 18th on her way to a maiden Major success and a dip in Poppie’s Pond.

“I think it’s surreal. To be a Major winner is really special, and to be the last person here at Mission Hills to jump into Poppie’s Pond, it’s all really special,” said Kupcho.

“I came out just trying to shoot a couple under. I had a six-stroke lead and I shot eight-under yesterday, so I figured if someone can do that, then they deserve to be in a playoff. That was my mentality and what I was fighting for all day. Obviously didn’t get there, but still pulled it out.”

The Chevron Championship will be leaving Mission Hills next year and moving to a new venue, believed to be somewhere near Houston.