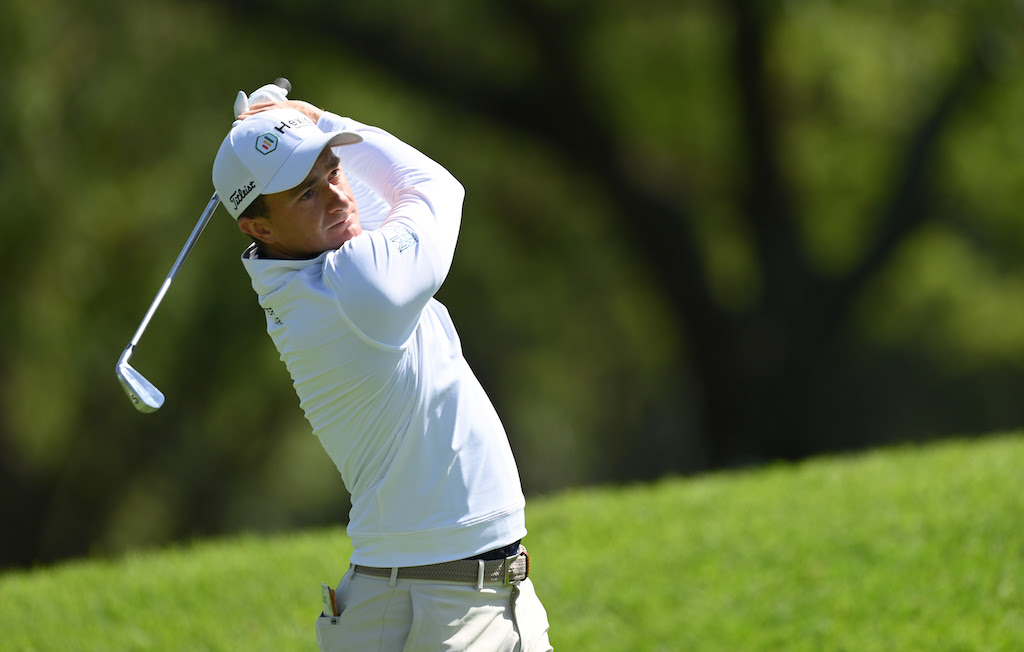 Paul Dunne was pleased to show signs of a return to form in the opening round of the Bain’s Whisky Cape Town Open as he fired a six-under 66 at Royal Cape Golf Club to hold a share of third place.

The Greystones man has plummeted down the world rankings and into the Challenge Tour due to injuries which have limited the number of events he has been able to play since hitting the heights of 65th in the world back in 2018.

But his first round in Cape Town was more than enough evidence that player still exists as Dunne carded seven birdies and just one bogey on day one in South Africa to trail Sweden’s Christofer Blomstrand and Spain’s Ivan Cantero Gutierrez by one shot.

The 29-year-old started the Challenge Tour season by missing the cut at last week’s Dimension Data Pro-Am, but he was content with his bounce-back performance on Thursday, especially off the tee.

“I was happy enough. The wind blew a bit but not as much as in the practice rounds, so the course was there for the taking and the greens were rolling nicely. I hit a few nice shots and capitalised when I could,” said Dunne.

“(The wind) definitely picked up on the back nine, that stretch of 13, 14, 15 are quite difficult. It was enough to make you think all day but not enough to get in your head and change how you play. I think it’s going to pick up a little more over the weekend but the scores are definitely out there if you play well.

“Last week I just didn’t drive the ball well, I got myself on the back foot straight away. It was there for the taking if you’re hitting fairways because the pins were easy and the tees were up, but I was struggling off the tees. It’s nice to feel like I have a bit more space this week, which has freed me up a bit and allowed me to hit some better shots.”

Dunne was five-under through his first 12 holes of the day before he made his only mistake, a bogey coming at the par-four 14th, but he brushed off that disappointment to make two more birdies coming in at the 15th and 18th for a 66.

His score at Royal Cape was only bettered by Cantero Gutierrez’s 65, with the former British Masters champion heading to the second course, Rondebosch Golf Club, for Friday’s second round.

“The other course is very wind dependent. The greens are tiny, much softer and the surfaces aren’t as good,” explained Dunne.

“The strategy is the same: keep it in play; but the wind direction can completely change how the course plays. Out here, if you can take your chances on the par-fives and then play sensible, keep the bogeys off the card, then the birdies will come. That’s my attitude anyway.”

Royal Dublin’s Niall Kearney is well in with a shout, too, after a five-under 67 at Rondebosch that has him tied-sixth following six birdies and a solitary dropped shot, with Holywood’s Tom McKibbin also starting brightly at the second course as four birdies led to a bogey-free 68 and a share of 12th.

Ardglass man Cormac Sharvin rebounded well from two early bogeys at Royal Cape with three birdies and no more mistakes to finish with a one-under 71, the same mark John Murphy finds himself on after three birdies and two bogeys at the same course. The pair are tied for 59th, just inside the cut line as it stands.

However, Donabate’s Gavin Moynihan will have to score well in his second round at Royal Cape as he started his round with back-to-back bogeys at the second and third before finishing with two more dropped shots at 16 and 18 on his way to a two-over 74 at Rondebosch and a share of 147th.

One stroke ahead of Dunne, Blomstrand was the best of the Rondebosch scorers as he notched nine birdies and two bogeys for his 65, a score matched by Cantero Gutierrez’s eight-birdie, one-bogey 65 at Royal Cape which has them in a share of the lead.

Dunne is joined by the leading local player Louis de Jager and Italy’s Matteo Manassero at six-under, with Kearney tied at five-under with five other players in a tightly-bunched leaderboard.

As it stands, the cut line is at one-under.