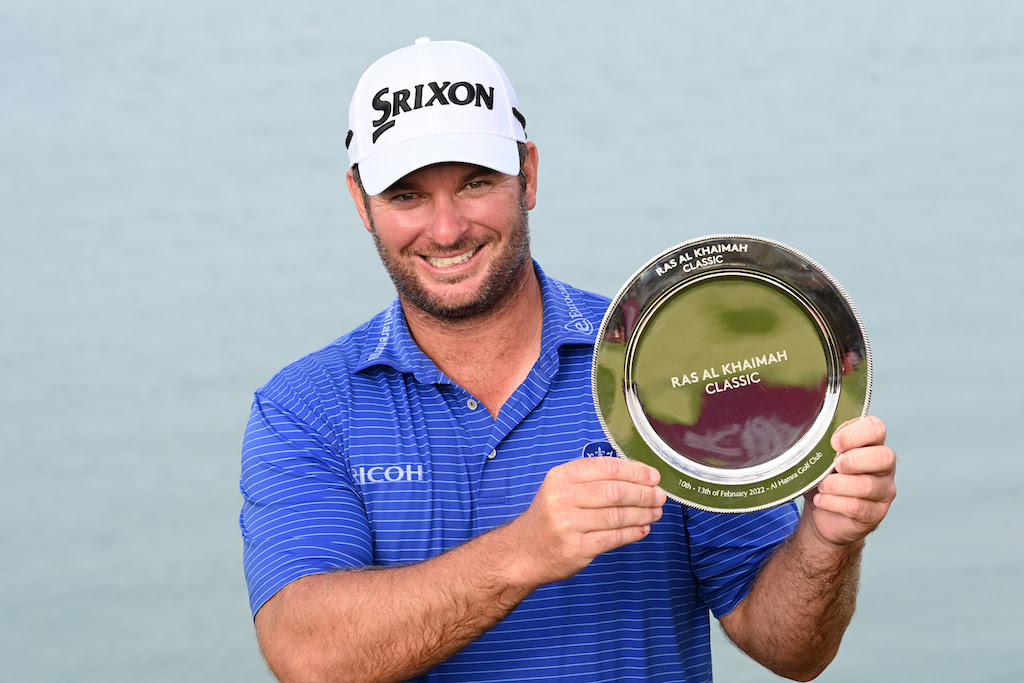 New DP World Tour winner Ryan Fox was not only staring at an 18-hour flight home to Auckland but also must undergo 10-days mandatory quarantine following his victory in the inaugural Ras Al Khaimah Golf Classic in the UAE.

Fox earned himself a unique slice of New Zealand golf history becoming the first Kiwi golfer to win wire-to-wire in 23-years to toast victory on the DP World Tour.

Fox, 35, was never headed over the four rounds of the second double-header at the Al Hamra club, posting scores of 63, 69, 65 and 69 to comfortably win by five shots at 22-under-par from England’s Ross Fisher, who signed off with a 66 to finish second.

And fair credit to Larrazabal who was at the back of the final green to applaud Fox’s effort after his own victory challenge faltered in leaking drives right off the 13th and 14th holes on route to par saves.

Also waiting for Fox following the formal presentation was a number of players along with fellow New Zealand-born Chris Hewett, who is Al Hamra’s President of Hospitality and no doubt responsible for Fox being left saturated in champagne.

“I’m standing here very proud. It’s been a great week with a fairly tough day, today and I don’t think I’ve slept on a lead for three nights in a row before in my career, and to be sleeping last night on a six-shot lead wasn’t very comfortable,” said Fox.

“I was awake a 4.30 am and not being able to get back to sleep, there was a lot of time to think about that. But I was where I wanted to be as going into a Sunday you’d take a six-shot lead anytime though at that early hour of the day, all you could think about was a lot of ‘what if’s’ like what do I do if I stuff this up.

“There was some interesting stuff out there but I am very, very happy right now.”

After three opening pars, it was a bogey, birdie, bogey run of three holes from the fourth for Fox. He birdied he par-5 eighth hole to get back to level ahead of three pars.

If there was a turning point in Fox’s favour, and when he virtually shut the door on his rivals and proved to the key to his victory, it was holing a stunning 43-footer pin-high right of the cup at the hardest hole all week and that being the par-4 12th hole.

The birdie on 12 was just the lift Fox needed as he then birdied the par-3 13th to get back to four in front of his rivals, with his tap-in birdie at the last handing Fox only his second Tour win.

“The birdie putt on 12 was huge and I’m glad it hit the hole, as it was going three or four feet past, and that birdie changed the momentum for me,” he said.

“I was hanging on for dear life at that stage and I also hadn’t played 12 all that well to that point, so to hold a 43-footer that just sealed everything for me.”

Fox’s win is the 13th of his pro career while he becomes the 26th New Zealander to win on the DP World Tour, and also first New Zealander since Michael Campbell to win from start-to-finish in this the 25th anniversary of the tour.

‘Cambo’ captured the 1999 Johnnie Walker Classic in Taiwan at the start of the then 1999/2000 European Tour season.

“Really, is that true,” said Fox when advised he and ‘Cambo’ have something in common.  If I can copy Cambo with a US Open win or something like that, and a bunch of other victories, I would be very happy.”

One of the first to congratulate Fox was Aussie cricketing legend Shane Warne with the duo often paired together at pro-am’s, including the Alfred Dunhill Links Championship.

“He is as mad on golf as anyone who I have ever met, so I look forward to catching-up with him as some point this year and having a celebratory drink or two with him.”

Fox was staying in Al Hamra, no doubt to enjoy a few celebratory ales, ahead of being picked-up at 1am for the hour’s drive south to Dubai Airport and his victory flight home to his young family in New Zealand.