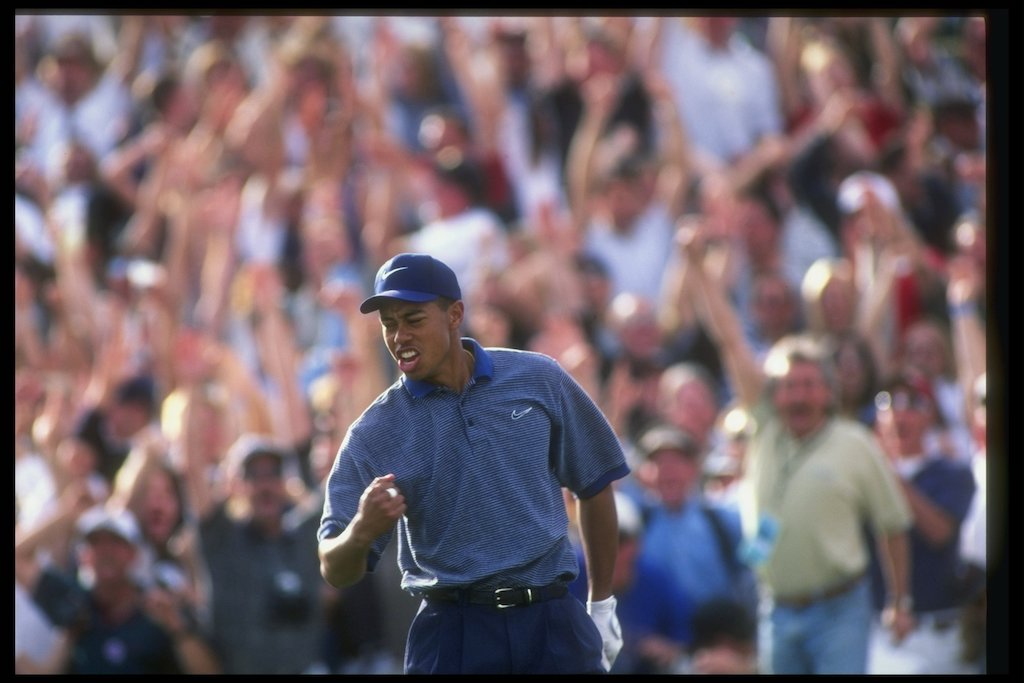 25 Jan 1997: Tiger Woods celebrates after making a hole in one during the Phoenix Open at the TPC of Scottsdale in Scottsdale, Arizona. Mandatory Credit: Craig Jones /Allsport

Tiger Woods was a couple of months away from winning a first of 15 Major Championships when he elected to contest the 1997 Phoenix Open at TPC Scottsdale in Arizona.

Woods had made his professional debut in late August 1996 at the Greater Milwaukee Open while a fortnight later half the press contingent covering the 1996 Presidents Cup in Virginia left on the weekend to head north to Illinois where Woods got himself in contention for a first Tour win at the Quad City Open.

Woods was playing the Phoenix Open final round in the company of Omar Uresti who had his brother, Rusty on the bag.

It’s estimated around 120,000 attended the third round that Saturday and who knows how many were gathered around the stadium hole when caddy Mike ‘Fluff’ Cowen handed Woods a 9-iron.

Woods’ shot hit the green, took two bounces, and disappeared into the cup. What then followed was pandemonium with the spectators, already fully beer-charged, raining beer cans onto the hole from all corners.

“I think I broke Fluff’s hand,” Woods said years later about his high-five to his caddie. “I missed Omar or was it Rusty? Omar? I missed his. And then old school, back in the day, raised the roof, you know, that was the thing in the day.

“Then on top of that, just smelling and hearing the beer hit behind me on the tee box. To turn around and see all this beer flying was crazy.”

It was Tiger’s second ace having grabbed a first on his debut in Milwaukee and the fifth ace at the 16th since the inaugural event in 1987 at the Phoenix Open.

Overall, there’s been nine aces on the 16th with the last being Francesco Molinari’s achievement in 2015, with Jarrod Lyle endearing himself to everyone with an ace on 16 in the 2011 event.

Bizarrely, Woods’ good friend Steve Stricker earned himself a gleaming new car on day four of the 1997 Phoenix Open for an ace also at the 16th, as the $35,000 Oldsmobile was only on offer for an ace on the final day.

Striker commented: “Well, that shows you who moves the needle.

“That’s Tiger for you. He raised the roof, but I won the car.”

It was Woods’ second ace as a professional — he made his first in his debut in the 1996 Greater Milwaukee Open. But you’d be hard-pressed to find a hole-in-one that produced as loud an aftermath as Woods’ ace in the history of the sport.