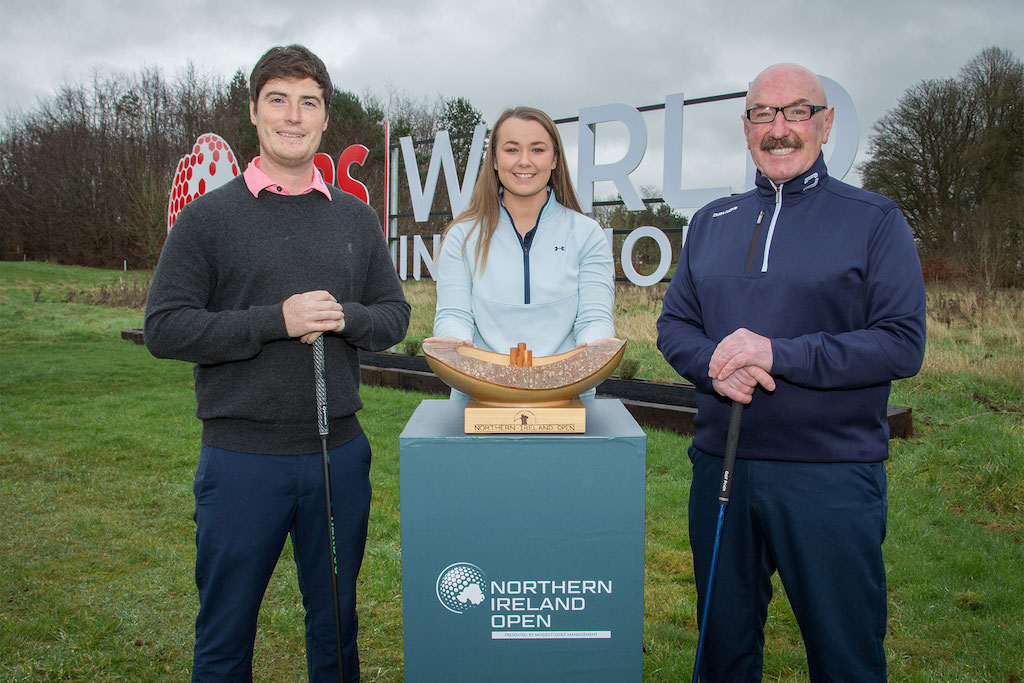 The 2022 Northern Ireland Open presented by Modest! Golf marks the 13th year of this renowned homegrown event where an exciting new format will be played over three venues.

The NI Open forms part of the Clutch Pro Tour for the second year and is a key stop-off on the tour’s schedule to be played over three rounds from July 4-6.

The first round will take place on the headland of Cairndhu Golf Club where Kinsale’s John Murphy won on his professional debut in 2021 to deny local favourite Dermot McElroy in second, with England’s Thalia Martin claiming the women’s title. The championship links at Castlerock Golf Club further along the coast will host day two before a two round cut takes place and qualifiers compete at Galgorm for the third and final round.

This year amateurs and celebrities will also compete alongside male and female professionals in an event similar in format to the successful Alfred Dunhill Links Championship played annually in Scotland on the DP World Tour.

In this revamped format for the NI Open, 104 professionals will compete in a 54-hole stroke play tournament, while a two-person Pro-Am team event (104 pairs) will run simultaneously. Amateurs will experience the pressure involved in trying to ‘make the cut’ with the top 10 Pro-Am teams progressing to Galgorm for day three, alongside the top-60 professionals.

“We are delighted to continue our involvement in an event we have been associated with since 2016,” said Niall Horan, owner Modest! Golf. “This year’s event is an exciting new format, and we look forward to working with Castlerock as one of our new venues.

“The NI Open is an excellent pathway for male and female professionals from across Europe to qualify and secure their place in the ISPS HANDA World Invitational presented by Modest! Golf Management.”

With the event being played over three outstanding courses, the new look NI Open will showcase the very best of golf in Northern Ireland. The action begins at the stunning headland of Cairndhu Golf Club, host to over 30 Irish PGA Region events. Day two will take in the outstanding links of Castlerock Golf Club, former host of the Irish PGA Championship when Ryder Cup player Des Smyth won there in 2001, and finally Galgorm’s championship parkland, home to the ISPS HANDA World Invitational and venue for the 2020 Irish Open on the DP World Tour (formerly the European Tour), will host the third and final round.

The NI Open will have a prize fund of £15,000 for the professionals and is also a pre-qualifying event where the leading professionals will earn a place at the ISPS HANDA World Invitational and a chance to compete in the global event tri-sanctioned by the DP World Tour, LPGA Tour and Lades European Tour.

“The NI Open was a great opportunity to kickstart my pro career and get me ready for what was to come,” said 2021 NI Open winner John Murphy, who will compete at this week’s AT&T Pebble Beach Pro-Am on the PGA Tour. “The NI Open was run incredibly well and the initiative to offer tour starts [into the ISPS HANDA World Invitational] is amazing. It benefited me and I’m delighted this opportunity continues for players.”

Murphy joins a host of illustrious former champions such as New Zealand’s Ryan Fox (2016) and other DP World Tour winners like Scotland’s Calum Hill (2018) and Sweden’s Joakim Lagergren (2014). For over a decade the NI Open was part of the European Challenge Tour where it set all attendance records for any event on the international schedule.

McElroy has enjoyed many strong outings in the NI Open over the years and is looking forward to competing on home soil again this year.

“I had a good run last year when I finished runner-up to John (Murphy) at Cairndhu. The event was extremely well organised, and we had the added incentive of trying to book one of the qualifying spots into the ISPS HANDA World Invitational, which I managed to do,” said McElroy, who went on to finish tied 19th on seven-under at Galgorm and end the week as leading Irish male player.

“I look forward to competing in the NI Open again this year and will obviously be hoping I can qualify and book my place in the ISPS HANDA World Invitational once more.”

And not to be outdone by their professional counterparts, many local celebrities and golf enthusiasts like event ambassador Liam Beckett MBE are also looking forward to playing in the NI Open.

“The NI Open has been a great event over the years and I personally am very proud to continue my association with the tournament,” explained Beckett, an NI Open Ambassador who has supported tournament golf at Galgorm for over a decade. “This year promises to be another great event, especially with the new format and being played over three great courses at Cairndhu, Castlerock then back to Galgorm for the final day.

“This really is the perfect way to showcase all that is good about golf in Northern Ireland.”

Tom Hayward from the Clutch Pro Tour added: “We are delighted to return to Northern Ireland for what promises to be another great event with such an exciting new format.”

“Cairndhu was an excellent venue last year where John Murphy was a deserving winner and this year we look forward to bringing the Clutch Pro Tour to venues such as Castlerock and Galgorm as amateurs get the chance to compete alongside male and female professionals.”

As a key sporting event within Northern Ireland during the summer, the NI Open is a strong economic driver for tourism and will generate extensive bed nights throughout the region due to the multi-venue format of the event. Spectators will be welcome at each venue and entry is free with more details to follow on the event’s dedicated website www.niopen.golf

The NI Open will gain extensive coverage beyond Northern Ireland through its partnership with Modest! Golf and Niall Horan’s tremendous social reach.