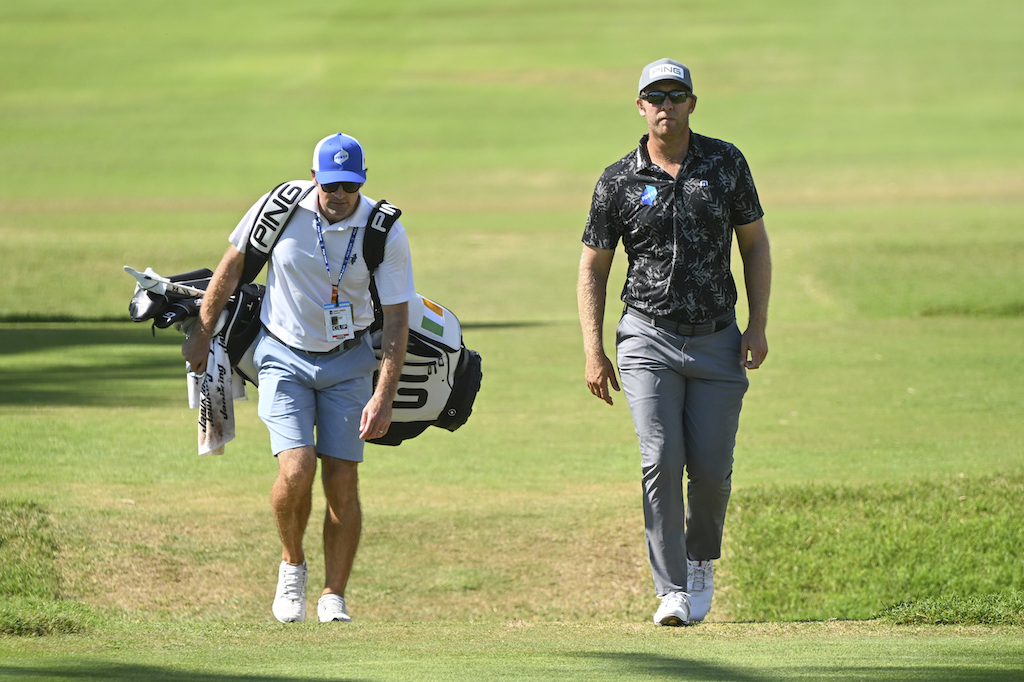 Seamus Power superbly muscled his way back into contention for victory at the Sony Open in Hawaii.

Power was laser sharp in birdieing three of his four closing holes in a bogey free five-under 65 and now heads to day four in a four-way share of third place at 14-under-par on the host Wai’alae course in Honolulu. The Irishman’s effort is his lowest 54-hole tally by two shots on the PGA Tour.

American and former Hawaiian champ (2013) Russell Henley continues to lead, moving to 18-under following his three-under 67. Masters winner Hideki Maysuyama was the biggest mover on golf’s traditional moving day in posting a 63 to be in second place at 16-under par.

The 34-year-old Power continues to impress and is now staring at a second PGA Tour victory in his fifth Sony Open showing.

A win would earn the West Waterford golfer an automatic invitation to the Masters while a top four finish would see him jump from his current No. 63 ranking and into the top-50 to help secure a maiden Augusta National tee time.

Power’s third round was mistake-free with birdies eight and nine ahead of birdies on 15, 16 and then a birdie at the par-five 18th for the third day running.

“Today was a good day on the course,” he said. “I felt like right from the start everything was in pretty good condition. Hit a lot nice iron shots.

“I didn’t get anything going. My first birdie was on No. 8 but I was able to stay patient and pick up three in the last four, which really changes the look of my round. So very pleased overall and looking forward to tomorrow.

“The wind was up a little bit but the tricky thing today was it was a slightly different direction and it was kind of moving a little bit here and there. I thought that was the kind of test with the wind today.

“Still not blowing what it normally does here, but just a little different test, like some of the holes just playing completely different directions.

“You just have to adjust. Simon (Caddy) and I were on top of it and were able to hit it pin high, which is always good time.”

It’s amazing what a first win does for any individual in their chosen profession and Power is no different. In capturing the Barbasol title, Power is an altogether different golfer from the one that had been struggling each year to retain his card.

In his last two Sony Open appearances he missed the cut. This year he arrived from the winners-only Sentry Tournament of Champions and with a round to play on Oahu he could very well be returning to Maui in ’23. Though first thing’s first!

“Ever since I was lucky enough to get the win, you always think you are good enough to do it or otherwise you wouldn’t be out here,” he said. “But knowing (you’ve won) and having that on the resumé, it does give you a little extra and hopefully I can use it tomorrow.”

So, what’s been the key to unlock this superb form?

“A couple of things have helped,” he said. “Playing last week is a big help to be honest. Even showing up last week. What’s funny is you kind of forget what you were doing, the registration and all the little things forget you have to do.

“So to kind of get that out of the way last week and come here feeling ready to go instead of not wondering what you’re going to be doing. So that’s it’s a big help.

“And then my game is in a good spot. It’s the best it’s been coming here, so like those two factors together lead to some better scores.

“I am finally figuring some things out. Golf, everyone who has ever played it, sometimes it just kind of makes more sense than others. But I been able to get it in a good spot. Kind of controlling my flight a lot better and being able to drive it a lot better.

“My short game and putting has always been a strength but add in some slightly better ball striking and it goes a long way.”