Power regroups from ‘loose’ second day start with 68 in Hawaii 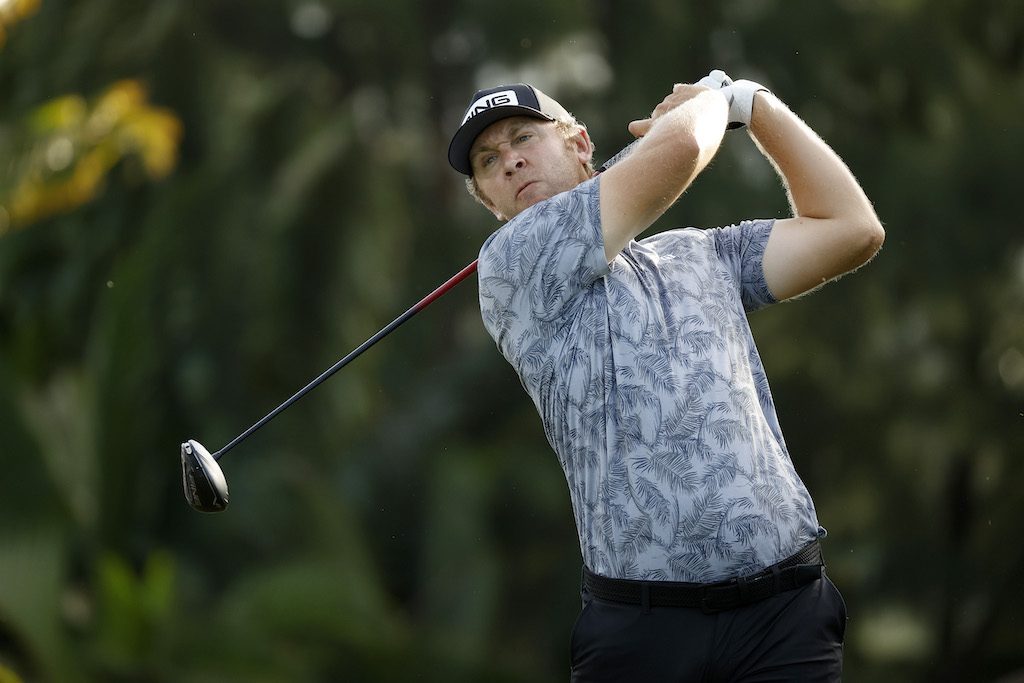 Despite a few ‘loose shots’ early on, Seamus Power stayed in sight of the lead heading to the weekend rounds of the Sony Open in Hawaii.

Power, who was one-over through four holes, steadied the ship in posting a two-under par 68 and be tied in a share of fifth place at nine-under par on the Wai’alae course in Honolulu.

A top-four finish in the Hawaiian capital would send him into the top-50 on the World Rankings and we all know what that would mean come April.

American Russell Henley leads the way after playing his closing six holes in six-under that included eagling the last in his seven-under par 63 for a 15-under par total.

Chinese number one Haotong Li, and we recall the player who beat Rory McIlroy to capture the 2018 Dubai Desert Classic, signed for a 65 to be in second place on 12-under. Matt Kuchar also with a 65 finds himself in third at 11-under-par.

Overnight leader and defending champ Kevin Na had a day in the office he’d rather forget in signing for a 71 to drop 15 spots into a share of 16th at eight-under.

Power had the hiccups early on in bringing to a halt a 73 hole blemish-free run when he bogeyed the second hole after being forced to take a penalty drop following a poor drive that found water.

The now Las Vegas-based Irishman then holed a six-footer for birdie at the next, the par-4 third but gave the shot back in finding a greenside bunker at the par-3 fourth in taking three shots to get up-and-down.

After the shaky start the World No. 63 settled down ahead of a two-putt birdie at the par-5 ninth hole to make the turn in even.

Power then birdied the par-4 12th hole and then at the par-5 18th he was in the left rough at the boomerang-shaped hole and then played a second right of the green from where he walked off with a fourth birdie of his day after a sumptuous chip.

“Today was a bit a of a struggle, to be honest, especially early on as I hit a couple very loose shots, made a couple bogeys, and was able to recover and kind of turn into couple under,” he said.

“Kind of kept me in it to some extent, but yeah, just a couple things to tidy up there afterwards.”

Being out early, Power spent time following lunch on the range and is hopeful of a better third day’s showing.

“I just need a little better control. Just kind of lost control of my flight there. Kind of cost me couple shots,” he remarked.

” So if we can get that back and give myself a few extra chances over the weekend. The golf course is good and is in great shape. Rough is up and nasty. I didn’t miss too many fairways today but you get punished pretty quickly.

“It’s going to be interesting, especially if the wind blows over the weekend. With the wind down, obviously it kind of counters a heavy rough. The course is in great shape. Greens are lovely.

Graeme McDowell doubled his second hole and dug deep to grab six birdies in a four-under 66 only to fall one shot shy of making the cut in his first event of the New Year. McDowell was in a front right green-side bunker but got a ‘flyer’ and walking off with a ‘6’.

“I had a really weird lie in the trap on two for my second and had a big lump of sand on it and the ball came out sideways and went right,” he said.

“I hit my greenside bunker shot kind of thin and it shot across the other side of the green and I made six so I was disappointed there.

“But I  was really happy to come back and make six birdies in the next 16 holes to give myself a long afternoon and probably a sweaty long afternoon to miss by one [joking], but fingers crossed.”

And despite having the weekend off, he was happy to also speak of what he had been up to with his family over the Christmas break.

“It was a pretty quick off-season I felt like. By the time I got back from the Shark Shootout I didn’t really take much of a break,” he said.

“I had some time with the kids on vacation just before Santa Claus arrived and spent Christmas just back in Orlando with the family. And pretty much right after Christmas day I was starting to get ready. But it was a pretty short off-season and I didn’t really take my normal break and kept my eye on my game and tried to keep working over Christmas a little bit.”