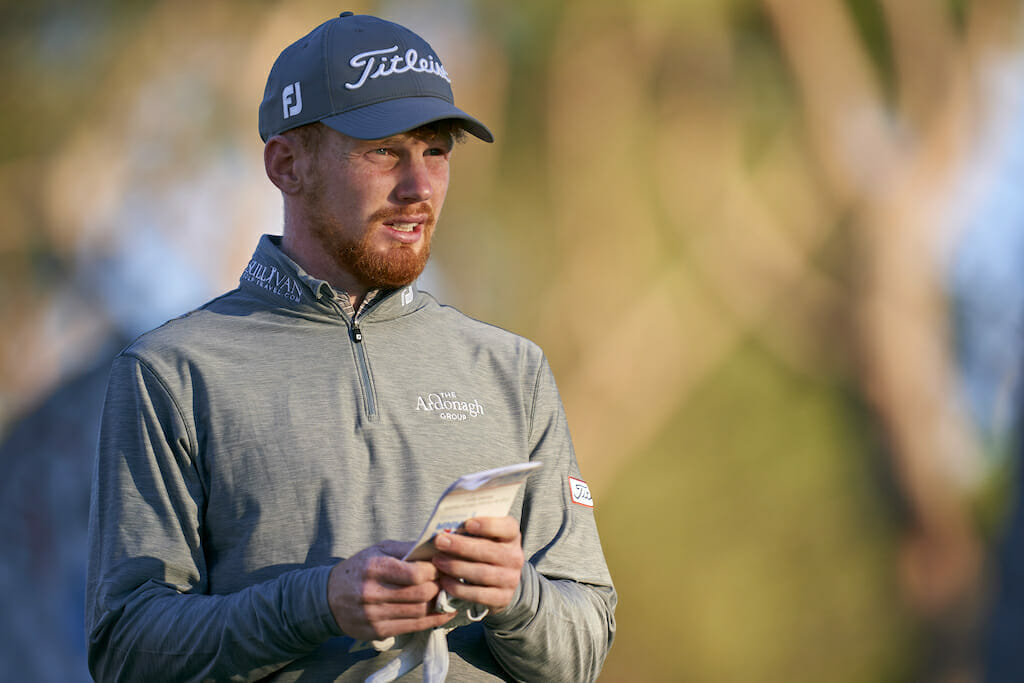 In life, if you don’t ask, you don’t get. Kinsale’s John Murphy knows that better than anyone having written to the Tournament Directors of the Alfred Dunhill Links Championship last year and come out the other side with a career-best finish having shared the fairways in the final group on Sunday with former Masters champ, Danny Willett.

Now, after requesting an invite to compete at the February 3-6 $8.7 million AT&T Pebble Beach Pro-Am, Murphy has landed a second start on the PGA Tour with a Byron Nelson date in May also highlighted in what’s shaping up to be a very exciting calendar for the Challenge Tour member.

“When I went over to the States a couple of months ago, thankfully I made some great connections,” Murphy said from his breakfast table in Portugal this morning.

“I played a few rounds in and around the Jupiter area – it’s golfing paradise and I got to play with some great people at some great places and a few people recommended that I send in a letter of request for an invite to the AT&T.”

One such contact Murphy singles out is Seminole member Jimmy Dunne who is Willett’s regular Pro-Am partner and someone who Murphy describes as “one of the nicest people I’ve ever met”, and whose advice has helped him greatly since turning pro.

“Thankfully the Tournament Director was generous enough to accept the request. He sent me a text a few days ago to confirm I was in and it was certainly some nice news to get,” Murphy said of a change of plan that will now see him head to America on the 23rd of this month, swapping South Africa for California in order to best prepare for a massive opportunity on the PGA Tour.

“It’s very exciting, especially as it’s something I didn’t really expect,” he admitted.

“Even with the contacts I had, you don’t want to convince yourself of something and then be disappointed by it, so I never told myself ‘yeah, I’ve a pretty good chance of getting into this’, but thankfully I got the nod.

“I’m very lucky to be in the position I’m in. It’s a great opportunity to have and I’m looking forward to trying to make the most of it.

“I’ve never played any of the courses there so it will be nice to get out a couple of weeks early with Shane [O’Connell -caddie] and hopefully know the lie of the land by the time the tournament comes around.”

For now, Murphy is fine-tuning his game in the Algarve where amongst the pros taking advantage of the warm-weather facilities, he’s also found himself sharing the fairways with some unexpected swingers, not least former Liverpool and England striker, Peter Crouch.

“The first day we got out here, myself and my coach Ian Stafford were just doing a bit of practice and we got talking to Peter Crouch on the range,” Murphy said.

“He was with an Irish guy, Scott Flood and the two of them just watched me hit a couple of balls and Peter said to me ‘are you the pro here at Quinta?’

“And I was like ‘no, no, I’m not’ [laughing], but as we were leaving we said that we’d hopefully see them around and they said they had a free spot the next morning so we teed it up.

“On the first I was useless. Second I was a little less useless and as the day went on, I sharpened up and thankfully I’m playing alright now.”

More than alright, Murphy is in the midst of a tournament where he’s tied for the lead through two rounds at the Algarvian Charity Pro-Am 2022 after rounds of 68 and 63 to be sitting at 13-under.

As for Crouch’s golf game, a man famous for his spectacular goals and robot celebrations isn’t half bad at the ancient club and ball game either.

“He was such a nice person. We sat down and had a couple of drinks with him after. He was A1. You’d never think he had the career he had sitting with him. He was very interested in what other people were doing and it was a very fun day to hang around with him.”