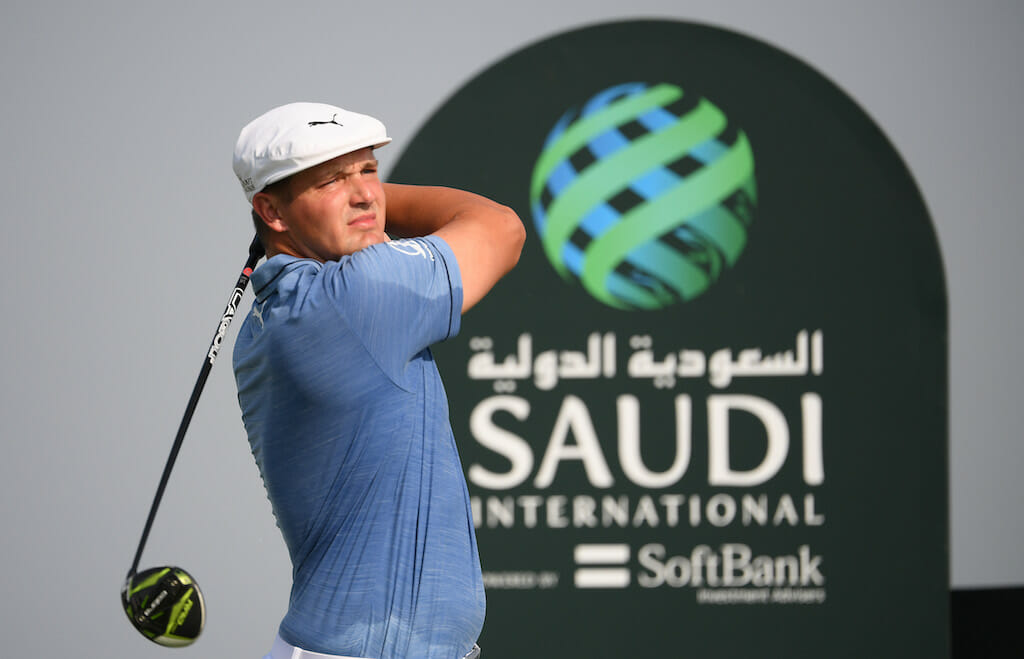 The Asian Tour says it will present the strongest field in its history when the 2022 Saudi International powered by Softbank Investment Advisers takes place at Royal Greens Golf and Country Club, near Jeddah, from 3-6 February 2022.

The likes of Dustin Johnson, Bryson DeChambeau and Shane Lowry are all listed to compete at an event boasting an increased prize purse of $5 million and a bundle of world ranking points. However, you can be certain that appearance fees must be eye-watering given the PGA Tour had threatened possible bans if any of their members teed up at such an event.

As things stand, a whole host of the game’s biggest stars look eager to get themselves to Saudi in February. Whether or not they have written for special exemptions to travel remains unclear but as things stand, players confirmed so far for the 2022 renewal include:

The leading lights of the Asian Tour will also have a significant presence with the inclusion of the top 30 ranked players at the end of the 2020/21 season within the Saudi International field. The final 30 will be confirmed in January following a season-ending double-header in Singapore, with the likes of Jazz Janewattananond, Scott Hend, Gavin Green, John Catlin, Shiv Kapur, Wade Ormsby and Joohyung Kim already having participated in the Asian Tour’s returning event, the Blue Canyon Phuket Championship 2021, won by Chan Shih-chang of Chinese Taipei. Click here to view the current Order of Merit.

Golf Saudi is a staunch supporter of men’s and women’s professional golf and continues to view the participation of the world’s best players in Saudi-based events as a key driver of interest amongst residents and growth of the sport’s popularity throughout the country.

Majed Al-Sorour, CEO and Deputy Chairman of Golf Saudi and the Saudi Golf Federation, said: “The 2022 edition of The International is the strongest yet, but we are still only in the formative years of our vision for golf in the Kingdom.

“We are seeing great progress in participation with boys and girls through our national grass roots and schools’ programs, and are enjoying a significant uptick in demand from men and women throughout The Kingdom. We are also enjoying a rich vein of form with our national amateur teams.

“Whilst this is a product of many factors, there is no denying the massive impact the best players in the world can have on creating multi-generational interest in the sport. This is why we place such importance on securing the strongest field possible, each and every year.”

The recently announced partnership with the Asian Tour, which included a 10-year sanction of the Saudi International from 2022, has created widespread interest but also great benefit within the sport. After an 18-month suspended season, it will contribute to the Asian Tour’s reemergence and generate new opportunities for players across the global golf landscape.

Al-Sorour added: “While we do not allow ourselves to be distracted from our long-term objectives by any external voices, we have been encouraged by strengthening discussions around the importance of fresh competition and innovation in the professional game.

“We are strong advocates for this, as we see it as the only way to achieve golf’s true global potential and realize the game’s considerable untapped value. All we will say is it is better for the sport if the competition remains healthy and respectful, as opposed to hostile, as all parties look at new ways to benefit this great game.”

The Saudi International field will include a broad spectrum of exemption categories that will see new competitors visit Saudi Arabia for the first time. This means new opportunities for many of the Asian Tour’s best performers to try their luck over the Royal Greens course.

Teenager, Joohyung Kim, currently 3rd on the Asian Tour Order of Merit, said: “The Saudi International will give us a new opportunity to compete against the world’s best, something many Asian Tour players have never been afforded. Given the way events and ranking points are weighted on different tours, it was historically more challenging for players rising through the Asian Tour to find their way into the biggest events.

“But the Asian Tour’s talent pool runs deep and, as we see every week, players from a diverse cross section of nationalities are more than capable of competing at the highest level. More big events will help to create a more prosperous Asian Tour and, without doubt, create new talent that can compete on the biggest stage, giving the sport in Asia and around the world a very welcome shot in the arm.”

CEO of the Asian Tour, Cho Minn Thant said: “With a new showpiece event and a field of such outstanding caliber lined-up for the Saudi International in 2022, there can only be positives for the game as a whole. We are extremely optimistic about how these new opportunities will encourage emerging talent, expose a broader base of players to elevated competition and attract a deeper and more engaged fan base.

“History will reflect upon how developments like the Saudi International and Golf Saudi’s partnership with the Asian Tour helped see in a new era in the professional game. With the right guidance, it’ll be the sport that benefits most, with more top athletes from across a wider geographical spectrum present at the very top level and more interest from a more diverse and committed group of stakeholders.”