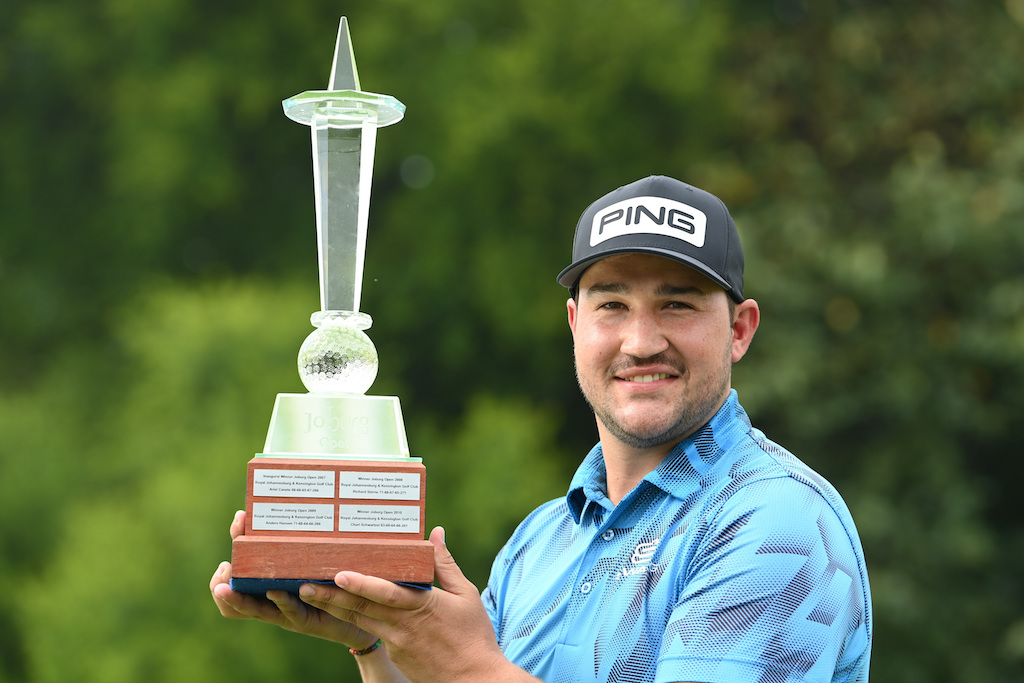 Thriston Lawrence celebrates with the trophy following victory during Day Three of the JOBURG Open at Randpark Golf Club on November 27, 2021 in Johannesburg, South Africa. (Photo by Stuart Franklin/Getty Images)

South Africa’s Thriston Lawrence found the silver lining at the end of a week of storms in the Joburg Open as he won his first DP World Tour title at Randpark Golf Club on Saturday.

Lawrence was crowned the winner by four strokes after it was decided that a tournament first reduced to 54 holes because of the COVID-19 red travel list announced on Friday was then further reduced to 36 holes on Saturday because of bad weather.

“It’s the best feeling in the world,” said Lawrence, who won on 12 under par, with fellow South African Zander Lombard taking second on eight under and England’s Ashley Chesters and South Africa’s Shaun Norris sharing third on seven under par.

“I played unbelievable golf over the past two days. I would’ve liked to have finished with a winning putt on 18, but it was out of my control. I went out there with a mentality to finish the tournament, but it turned out nicely for me and I’m just so happy.”

This was Lawrence’s second Sunshine Tour title and his first DP World Tour title. And with it he secured an exemption into the historic 150th Open at St Andrews next year.

“It’s a lifelong dream that’s come true. To play your first ever Major on the Old Course is an unbelievable dream come true. I’m so excited. As a kid you always want to play in the Majors. Everybody wants to break Jack Nicklaus’s record and now it’s my first Major and an opportunity in that direction. I’m ecstatic.”

Lombard and Chesters took the other two Open Qualifying spots on offer to the leading three players in the top 10 who are not already exempt. Norris is already exempt for next year’s Open.

And a victory at the end of the year means a new start for Lawrence as he now makes plans that before this only existed in his dreams.

“This changes everything. It’s life changing. This is the first stepping stone to get to my bigger dreams. From a young age I’ve always wanted to win on the DP World Tour. And now this gives me an opportunity to get to the PGA Tour quicker. I wasn’t sure where I was going to play this year and I really wanted to move onto the next step.

“The last two years with COVID-19 have been tough and you see your dreams fade. For it to change this week is unbelievable.”