Volunteers at Birr save the day after loose cattle cause havoc 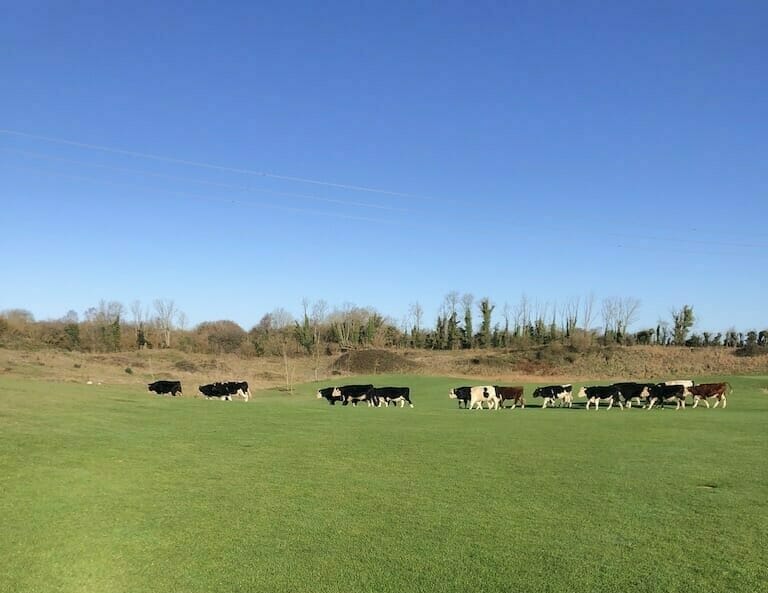 The rogue cattle at Birr

A swift response from the members of Birr Golf Club on Tuesday ensured no lasting damage was done to a number of the course’s greens after 22 cattle had a field day in Offaly.

Paying absolute no heed to the frost delay at the club that morning, the cattle traded their unkempt fields for the manicured fairways at Birr, with some even finding the putting surfaces.

Often the punchline of a Christmas cracker joke that asks, ‘what’s the coldest town in Ireland’, Birr actually had the wintry weather to thank for limiting the damage, with the firm ground just about withstanding the weight of the heifers who had lined up for a putt.

The club wasn’t so lucky some dozen years ago when a number of hefty bullocks ripe for the factory found their way onto the then soft land but there was no such damage this time around, allowing Head Greenkeeper Eoghan Buckley to see the funny side of things after an unusual few days for the turf department at Birr GC.

“Because of the frost, we were at the clubhouse splitting timber, fixing machines and just going about general winter maintenance,” Buckley recalls, who took to the course at around 10am to move a couple of tee markers forward for winter before spotting some unusual footprints.

“We’d be used to seeing animal tracks because we’ve a lot of deer on the property but being from a farming background, I said straight away, ‘that’s no deer!’

“I walked back up to where I thought there might be a fence. Sure enough it was on the ground. I eventually walked three cattle back across the golf course on my own thinking they were the only three that were out.

“The farmer was out and I asked him, ‘Are you missing any more?’

Sure enough, the clubhouse phone began to ring as members, who had made their way around the course after the frost had thawed, began to bump into some mooveable (sorry!) hazards.

“The first call came in and they said ‘there’s three bullocks here across the fourth fairway, they’re grazing!’ I’d seen a couple of greens and I thought ‘that’s fine, a couple of greens not too bad’ but the calls kept coming in and when I heard there were 19 bullocks over the far side of the golf course, it was a worry.”

Buckley quickly got in touch with Greens Chairman at Birr, Liam Delaney, who together with Francie in the bar and Robbie in the office, sent word out via text, email and phone call that a working bee was needed to maximise recovery ahead of a long winter.

“Next morning we said we’d close the front nine and thirty-plus people showed up with all sorts of implements… pikes, pitch forks. It was like we were going to renovate a bog! Screwdrivers were all we needed,” Buckley laughs.

“We split up in two groups and there was great banter. A lot of ‘I’d say this is the first time you’ve ever had to repair a green, I know you don’t hit them too often!’ But more than anything, it was nice to know that when your back is against the wall, that you actually have that kind of support. The members were great.”

So thankful to the 30 or so members that showed up to help with repair work on 10 damaged greens ??@BirrGolfClub @ATPI21 pic.twitter.com/YtEOoZUmXY

Delaney was quick to echo Buckley’s sentiments, congratulating the members for turning out in force despite little notice to do so.

“We got a fantastic response,” Delaney says. “It was very short notice for people who would’ve had other arrangements made. There must’ve been thirty or forty members turning up to put in some great work and we got a lot of apologies from those who couldn’t make it. We thought we’d be a few days at it but thanks be to God we got it all done yesterday – I hope!”

It helped having the leadership and expertise of a top man in charge of the course at Birr.

“Eoghan is excellent,” Delaney adds. “He’s a great Head Greenkeeper to have and the team on the course is super. It was great to have everyone row in behind it. I’d like to congratulate the members for all the help. What’s bad could’ve been worse. It’s great to see such volunteerism alive and well at the club.”

With the cattle well and truly fenced back in, the course is already playable, and although their meaty hoof prints will fully clearly in no time, the cattle have left their mark at Birr for many moos… moons* (again, sorry!) to come.

“The greens will fully recover,” Buckley says. “Obviously at this time of year recovery is a little slower anyway but I’ve no doubt they’ll be 100%. We spiked a couple of the more damaged ones this morning but they’ll be no worse or no better than what they were this time last week.

“I told the members, they’ve a freebie now, it’s pick up from six feet and blame any bobble on the cows! It’s nice to be able to laugh about it now but it could’ve been hugely serious.” 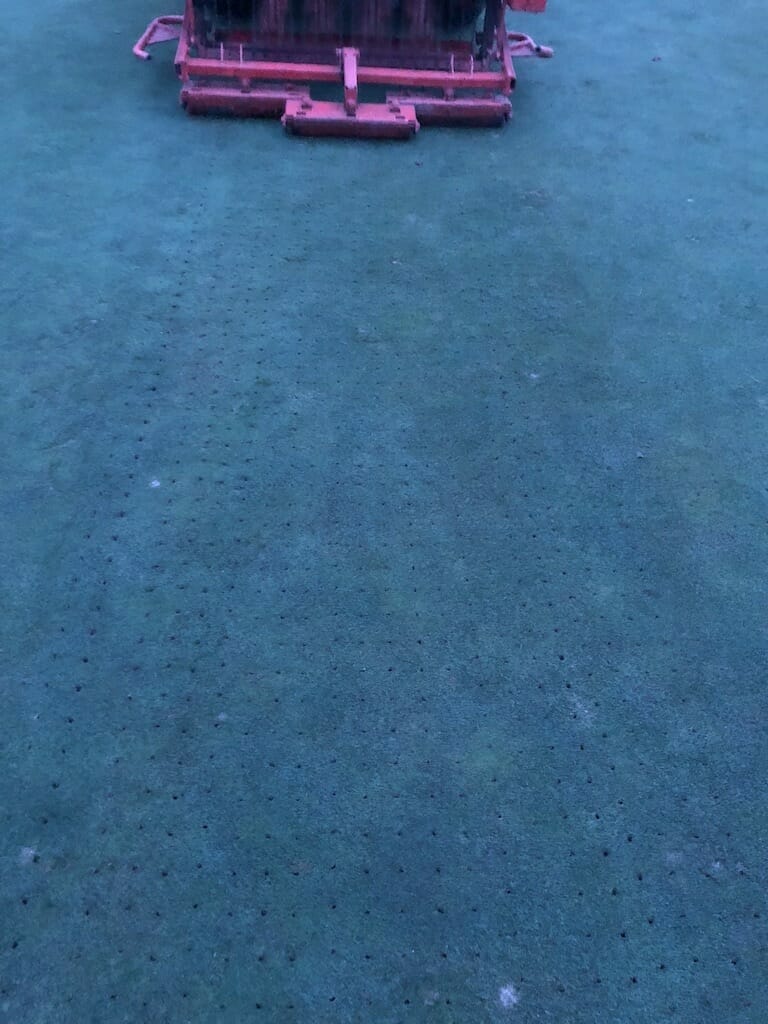 Some damaged greens were spiked before rolling 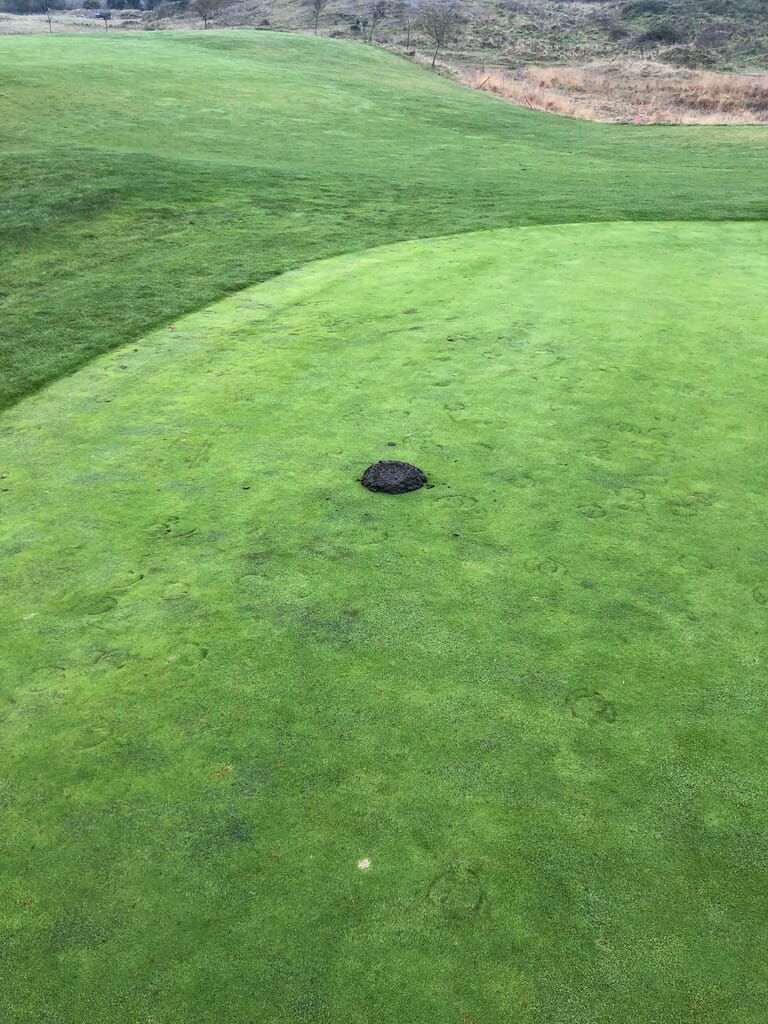 This cow must’ve lipped out for birdie 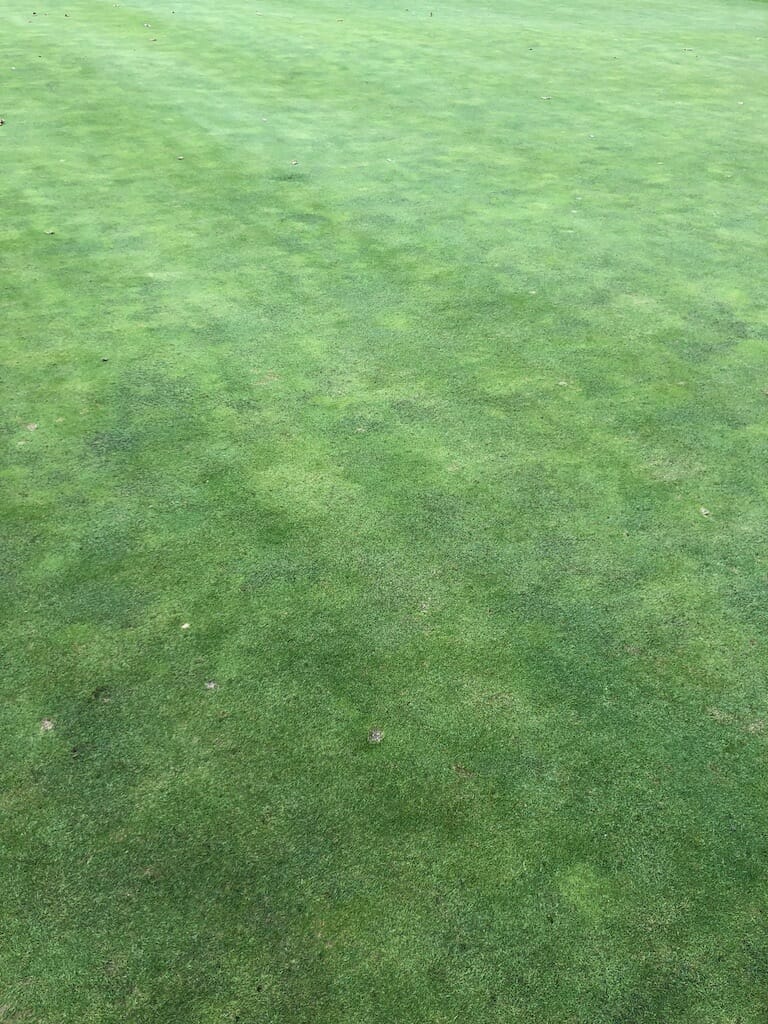