McIlroy’s frustration boils over – almost tears shirt from his shoulders 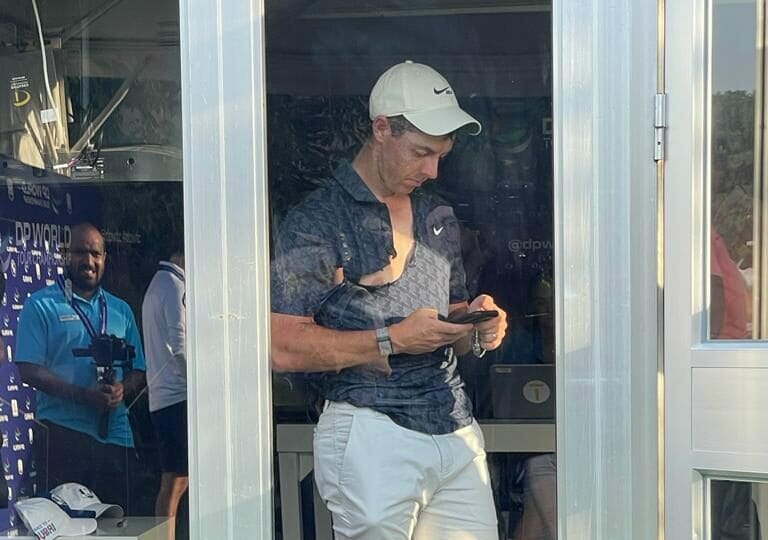 Rory McIlroy’s frustration boiled over in a never seen before manner when he nearly tore the Nike shirt off his shoulders following a dismal final round 74 at the season-ending DP World Tour Championship here in Dubai.

McIlroy produced a horror last day performance in his penultimate event of the year, slumping from the overnight lead at 14-under par to settle for a distant share of sixth place at 12-under par on the Earth Course at Jumeirah Estates.

The four-time major champion was looking to become the first three-time winner of the DP World crown though McIlroy opened the door on his rivals to be just one-under par through 14-holes ahead of a closing four holes in dropping shots at the 15th, 16th and final holes.

McIlroy was incredibly unlucky when his approach on 15 clattered the flag-stick only to find a greenside bunker from which he failed to get up and down. That dropped shot was followed by a three-putt on the 16th also for bogey and then at the last, a hole he had doubled on day two, his drive was well into trees down the right side of the hole and close to houses from where he managed to get his ball back to the fairway only to see it trickle into the water that splits the entire 18th fairway ahead of walking off with a bogey to be one-over for par-5s for the four rounds

It was clear that McIlroy was not about to comment post his round but the sight of him with the right side of his shirt hanging off his shoulders was entirely unexpected.

McIlroy later changed into a new shirt and ended his year 19th on the Race to Dubai standings, one place higher than a year ago.

Shane Lowry ended his year one shot back of McIlroy with a 72nd hole birdie but only after a ninth hole double-bogey in his round of 72.

Collin Morikawa created European Tour history in becoming the first American to capture the DP World/European No.1 double clawing his way from just inside the top-10 after 11 uneventful holes to then birdie five of his closing seven in a round of 66 for an eventual three-shot success at 17-under par.

The 24-year reigning Open Champion proudly strode up the last to create Tour history ahead of next year’s 50th anniversary.

“It’s so special. You know, I came here last time, first time to Dubai, obviously not having played too many European Tour events, and I told everyone that I wanted to come out here and win: Win the and win The Race to Dubai and win the DP World Tour Championship, and I had it in my control this week,” said Morikawa.

“Obviously if I won, I would have sealed the deal, and that’s all I focussed on really.

“I couldn’t really get my head too focussed on The Race to Dubai. I knew there were many, many scenarios that could have happened. But I wanted to come out here and win. I felt like my game has been in a really good spot over the past month and a half since The Ryder Cup, so you know, overall, it’s just an amazing win, really special.”

England’s Matthew Fitzpatrick, who had burst into the lead with three holes to play, finished runner-up also with a 66 and at 14-under par.