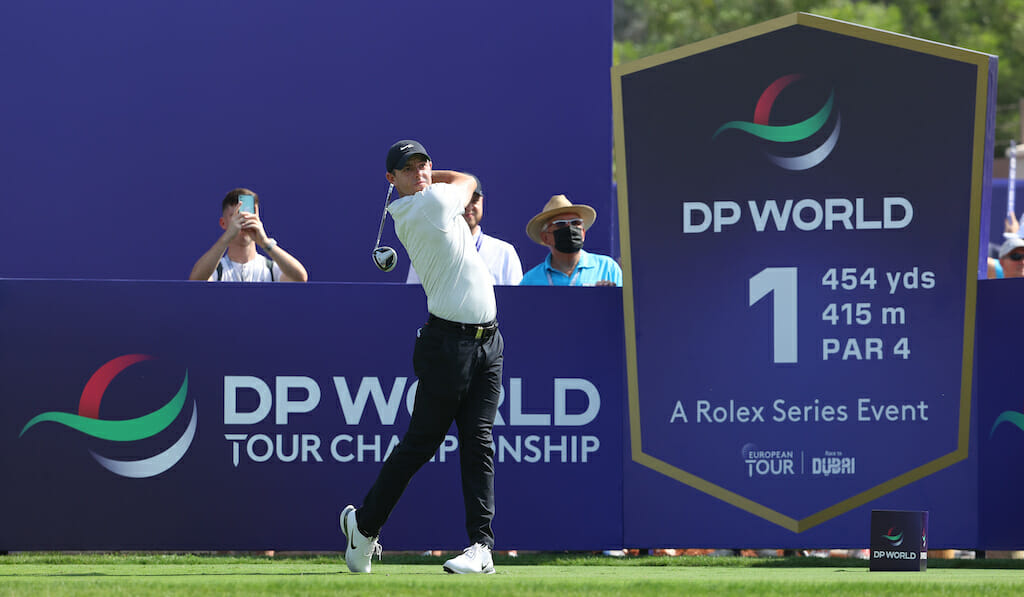 Rory McIlroy’s fondness for the Earth course again shone through, producing what he described as an ‘easy’ 65 to muscle his way to a two-shot lead on the opening day of the season-ending DP World Tour Championship in Dubai.

McIlroy, a two-time winner of the event, burst from the blocks with a birdie at the first and then holed a 15-footer from behind the flag for an eagle ‘3’ at the second on the Earth course here at Jumeirah Estates.

The World No. 8 was then out in front at six-under after just eight holes thanks to birdies at the fourth, seventh and eighth holes.

McIlroy dropped his only shot of the round at the ninth ahead of a back nine that featured birdies on the 10th and the last either side of seven straight pars from the 11th to 17th holes.

Race to Dubai money-list leader Collin Morikawa had been four-under par through seven holes before the double Major winner dropped a shot on nine and regrouped with birdies at 14 and 15 to end the round with a four-under par 68 and tied in fifth spot.

The American remains projected to win the Race to Dubai after nearest rival and compatriot Billy Horschel signed for a two-over par 74.

Though the story on day one of the last event under the European Tour banner was all about McIlroy seeking to not only win for a third time in 2021 but capture a trio of DP World Championship crowns.

“It was an easy 65 and when you’re six-under through eight and you end-up shooting seven-under you feel like you left a few out there,” he said.

“I guess it swings in roundabouts. I’m not going to complain about shooting 65, but I felt like there’s a couple chances on the back nine that got away from me. I holed a couple nice par putts as well. It all evens out at the end.

McIlroy’s ‘shot of the day’ was definitely the second hole eagle.

McIlroy’s opening round effort is projected to see him jump 16 places to fourth on the Race to Dubai standings heading into the second round.

And McIlroy was clearly in good form chatting-wise, spending time with the written media following his SKY Sports Golf interview and asked among other things if he could elaborate further on the changes in his game post the disappointment of the Ryder Cup.

“I guess people say playing golf and not golf swing, I guess it’s a little like that.  I got a little too much in my head because I felt that was the way forward for me because my swing certainly wasn’t what it was five years ago.

Shane Lowry was left disappointed to bogey the last in his round of three-under par 69 that included five birdies and among those birdies on 14 and 15.

“I played pretty decent and four-under would have been a decent start had it not been for the dropped shot there at the last,” he said.

“It’s never nice to drop a shot at the last anytime you play but you put it aside and I look forward to tomorrow.”

“I played great to be four-under and it was a really casual round of golf and playing alongside Shane is one of the best guys to play golf with,” said MacIntyre. “He enjoys the game in the same way I enjoy it and that’s being relaxed and pretty stress-free.”