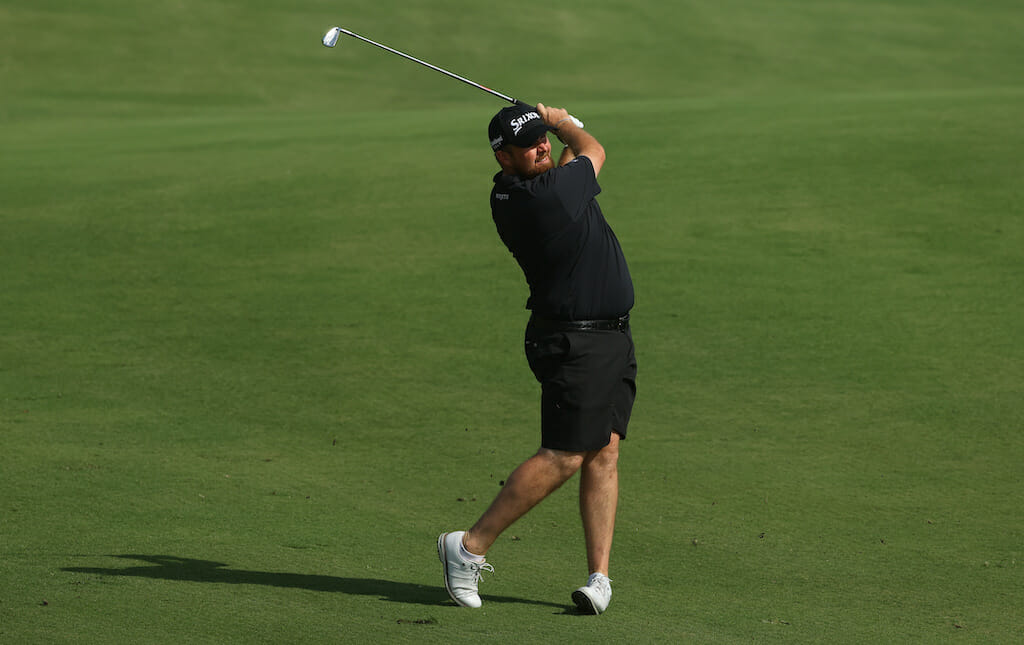 Lowry joins European teammate Rory McIlroy teeing-up in the DP World Tour Championship again being hosted on the Earth course at the Jumeirah Estates in Dubai.

Lowry and caddy Bo Martin arrived in Dubai after a near 15-hour direct flight from Houston where Lowry had disappointingly missed a second PGA Tour cut in succession, something he had not done since June 2020 in the opening two events following the lifting of the Covid-19 lockdown.

And the current World No. 42 ranked Lowry, who was a brilliant runner-up in the 2017 Dubai event, said he’s been counting the weeks, and for all the right reasons, to this week’s European Tour season-ender.

“I always love coming back here to Dubai and the UAE and, to be honest, I have been counting down the weeks to this tournament, anyway,” he said as his father, Brendan looked on.

“I love this place, I love Dubai, I like the golf course here at Jumeirah and it’s nice to come here at the end of the year and everyone who’s here is in pretty decent form, and it’s a good tournament.”

However, Lowry’s now the father of two daughters with his youngest, Ivy just 11-weeks old, and that has Lowry clearly looking forward to this Sunday night and the flight home to his family.

“Oh, I can’t wait to get home,” Lowry said. “I probably shouldn’t have played the last two tournaments and taken some time off. I just feel like I had to play and get my numbers up in the States.

“Since the Ryder Cup, I’ve just been running on the smell of an oily rag. The whole year, and for the two years since I won The Open, I have been spending my time making the Ryder Cup team. I achieved that goal but just felt like I left everything there, and that’s why I feel like I’ve been running on fumes these last few weeks.

Lowry’s never been short of motivation, not since bursting onto the Tour in dramatic manner at the 2009 Irish Open at Baltray, but then he’s never before experienced what he went through at Whistling Straits.

And it’s something he said he discussed last week in Houston with Lee Westwood, who played in nine European Teams before becoming a vice-captain.

“I didn’t really understand what it was like or how you would feel post the Ryder Cup, but I spoke to Westy (Lee Westwood) last week and he took six weeks off following the Ryder Cup,” said Lowry.

“I can also understand Jon Rahm not teeing-up this week. You need a break and I know the Ryder Cup is only three days golf but it builds up so much in your head and when the competition begins you just give it your everything and once it’s all over, it’s such a low. From being on such a high, it’s all such a come down.

“It’s very hard to explain and it’s very hard for people who are sitting at home and will probably read that Jon has withdrawn this week but you need to look closer at the players out on the golf course why you do feel mentally and physically drained.

“I gave it my all the last weeks out on the PGA Tour but I just wasn’t there mentally or physically, and it was kind of one of those, and not that I am not making excuses, but that’s how I feel.

“I have played pretty much every week since we came back from the Covid lockdown. There’s been no real breaks and it’s just been go, go, go in striving the make the Olympic side, make the Ryder Cup team so it’s been all this and that.

“We’ve had six majors in some 10 months, the Olympics, the Ryder Cup and it’s made for a tough and demanding year.”

And then there’s his young family back home with Lowry desperate to get back to the three most important women in his life.

“With another baby it’s been a pretty full-on year both on and off the golf course,” he said.

“So, after this week I cannot wait to get home. Ivy’s 11-weeks old and I have been home for probably four of those weeks. It’s important to be home and I am looking forward to going nowhere until we get to Abu Dhabi in the New Year.”