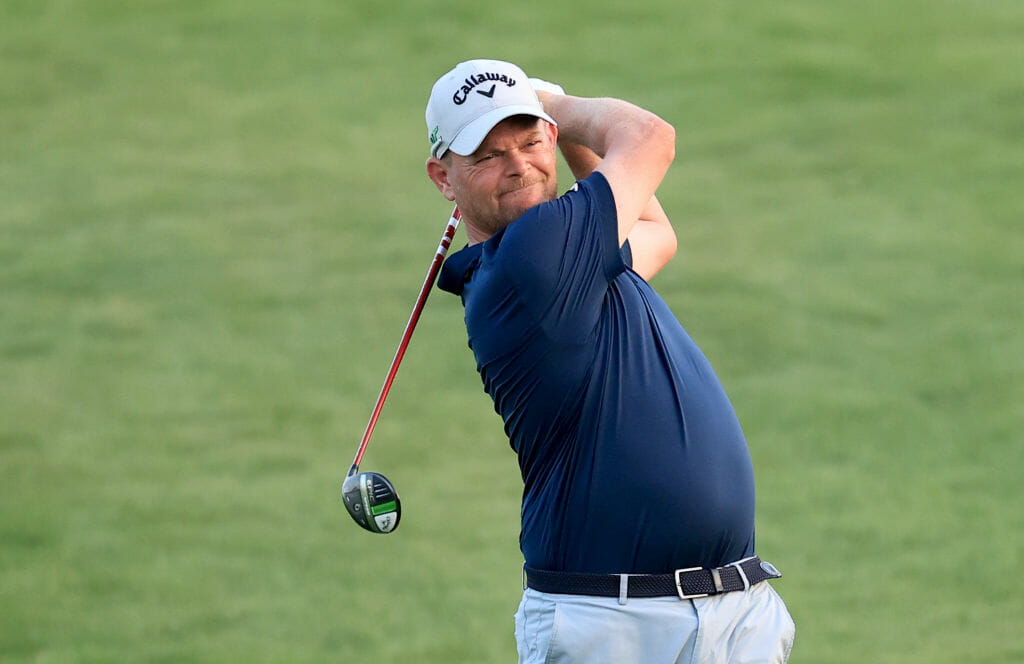 It’s been an absolutely bizarre yet lucky 13th straight season outcome for Scottish golfer David Drysdale in retaining full playing rights for next fortnight’s start to the 2021/22 DP World Tour.

It means the golfer known affectionately as ‘Double D’ with his caddying wife, Vicky, can head to South Africa next week with full Tour status for the opening event of the new season – the 25th November starting Joburg Open.

DD & I have never been so Happy & Relieved to be the last man IN on the R2D Rankings this year ????⛳️@EuropeanTour Its not been the best of seasons for us However we are so glad to be playing on #DPWorldtour in 2022 Thanks to everyone who has supported us ❤️?#TeamDD pic.twitter.com/nRNQmLCkfi

Bizarrely, Dysdale missed Friday’s cut at the AVIV Dubai Championship and dropped from then 121st to one spot outside on 122nd and from there on the fate of his Tour membership was out of his hands, particularly when England’s Ashley Chesters posted a second round 66 to move from 125th and take the Scot’s place at 121st.

Chesters then carded a third day 74 and looked certain to knock Drysdale back out of 121st place when he moved to six-under par for his final round but a Sunday penultimate bogey saw the Shrewsbury golfer slide back down the rankings before ending his season at 124th on the money list.

Drydale and his wife were still in Dubai watching TV coverage and doing all the calculations before confirmation the Eyemouth club attached golfer had held onto his card in his 543rd tournament and the end of his 20th season on Tour.

“What a weird weekend”, said Drysdale in what is an understatement.  “After missing the cut by a shot, which was quite annoying, that took retaining my card out of my hands in terms of what could happen in the final two rounds,” said Drysdale.

“Three or four guys right behind me – Ross Fisher, Benjamin Hebert, Scott Hend and Renato Paratore – also missed the cut and, in the end, nothing changed, which is quite unique as nobody moved in and nobody moved down. It was bizarre.

“Ashley Chesters then became the guy I had to worry about and I think he needed a top-15 finish to climb above me. He had a good go at it today.

“I wasn’t really thinking about anyone other than him then late on, it was a case of ‘oh s***, Thorbjorn Olesen has a chance here’.

“It’s just amazing it came down to just one putt or one shot over the whole year so it’s onwards and upwards. We’ve still got an old Jock on tour and I might have a wee glass tonight (laughing).

“Holding onto to my card means I have a far better category than if I had lost it so still being here in Dubai, which was always the plan, means we can head down to South Africa for the start of the new season the week after this.

“I’m just delighted how things have panned out for me in the end, but I had so many opportunities in the last wee while to knock this off. It’s down to me”.

Dane Jochim B Hansen brilliantly posted a bogey-free closing round of 68, and dropping just one shot over the four rounds, winning by a shot with a 23-under par tally.

For the 31-year-old it is his second European Tour victory and his first being the 2020 Joburg Open where the new re-named 2021/22 DP World Tour will commence next fortnight.